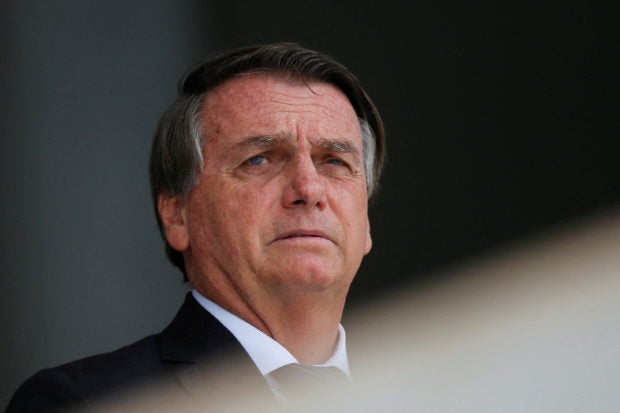 RIO DE JANEIRO — Brazilian President Jair Bolsonaro says he will retire from politics if he fails to be reelected in the upcoming October elections, as polls show him lagging.

“If it’s God’s will, I’ll continue (as president). If not, I’ll pass the (presidential) sash and retire,” Bolsonaro said Monday night during an interview on a podcast for young Evangelical Christians.

The 67-year-old added: “At my age, I have nothing left to do here on Earth if my journey in politics ends on December 31,” the last day of his term.

It was a change in tone for the far-right incumbent, who has previously said there can only be three outcomes for his reelection bid: “prison, death or victory.”

Known for riling up his base with his hardline rhetoric and disregard for political correctness, Bolsonaro has struck a more moderate tone recently as he seeks to cut leftist ex-president Luiz Inacio Lula da Silva’s lead in the polls ahead of the October 2 vote.

Bolsonaro also gave a rare apology in the interview over some of his more controversial statements, including saying in 2020 that he could do nothing about Brazil’s soaring Covid-19 death toll because he was “not a grave-digger.”

Responding to a question from Evangelical rapper Felipe Vilela, who said he was “saddened” by that statement — which came a day after his father-in-law died — Bolsonaro said he had been a “dimwit.”

“I regret it,” he said in the marathon four-hour interview.

“I’m human, I regret what I said, I wouldn’t say it again. You can see my behavior has changed from a year ago.”

He said he also regretted telling critics urging him to purchase Covid-19 vaccines to “go get them at your mom’s house.”

However, he defended his statement that the vaccine could “turn you into an alligator,” calling it a “figure of speech.”

“Do you have African heritage? You’re a little dark, aren’t you?” he said.

Vilela later said in a post on Instagram he had not taken offense at the statement, calling it a “joke” by Bolsonaro, “someone who comes from another era, trying to bridge the gap between us.”

Bolsonaro in the interview also urged young people to vote carefully next month, saying the election would “mark your future” and warning against the recent wave of left-wing victories in Latin America.

Bolsonaro and Lula face off in Brazil presidential debate