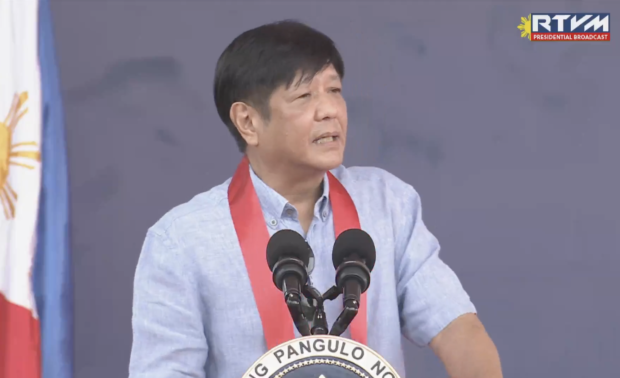 President Bongbong Marcos in his speech during the tree-planting activity on the occasion of his 65th birthday in Rizal. Screengrab from RTVM video / Facebook

In a statement, Romualdez gave assurance to the Chief Executive that he and the latter’s supporters at the House of Representatives are behind him in working for the betterment of the country, knowing that the “hopes and dreams” of Filipinos rest upon his shoulders.

“Warmest greetings, Your Excellency, President Ferdinand “Bongbong” Romualdez Marcos Jr., on the occasion of your 65th birthday! Upon your shoulders lay the hopes and dreams of 112 million Filipinos,” he said.

“We, the Members of the House of Representatives of the 19th Congress, are behind you all the way as we work together to uplift the lives of our countrymen,” he added.

Romualdez also expressed hope that Marcos would continue to be blessed with wisdom and compassion as he continues his term as president.

“Proceed in this noble endeavor with our fervent prayers and wholehearted support for Your Excellency’s continued success,” the House Speaker said.

“May God continue to bless you with good health, wisdom, and compassion, as well as the strength and conviction to provide solutions to the lingering problems that continuously beset our country today.  Mabuhay!” he added.

Department of Budget and Management (DBM) Secretary Amenah Pangandaman, meanwhile, said they are praying for the President’s continuous success, noting that they have been witness to how he has been working to help Filipinos.

“Mr. President, Sir, we join you today in celebrating a life of service and duty to our countrymen. We are witnesses to your unyielding resolve to remain true to the call of public service regardless of the challenges you have encountered along our way. By embodying resilience and humility and espousing true nation-building and unity, you have truly gained the confidence and trust of the Filipino people,” Pangandaman said.

“On your birthday, we pray for your continued success and good health, as you carry on to promote the greater good to the greatest number of our people. May this day inspire you to remain determined in realizing our goal for a united and prosperous nation,” she added.

“On this, your first and memorable birthday as President of the Republic of the Philippines, My family and I add our sincerest greetings and well wishes for your lasting success as the leader of our country as a legacy to the Filipino people,” Delos Santos said.

“With the immense trust and mandate from the people come great responsibility and duty. To your efforts, I contribute my public service and support,” he added.

Recto, meanwhile, also wished the President good health, hope, and happiness, adding it was what every Filipino would want for him to continue his service to the people.

He also noted that the President is at an age where most people retire, but he is just starting his presidency.

“What I would wish the President on his birthday are what every Filipino like him would want in life – health, hope, and happiness,” Recto said. “At an age when people retire, he is just getting started in the toughest job he has saved for last.”

“The presidency is hard labor that requires great health, a sharp mind, and a kind heart. May he have all of these so the greatness he dreams for the country, which is what the people want for themselves, would come true,” he added.

Marcos earlier chose to celebrate his 65th birthday by kickstarting a nationwide, simultaneous tree planting event in San Mateo, Rizal, to stress the need to take care of the environment.

In his short speech at the event in San Mateo’s Barangay Pintong Bocaue on Tuesday, Marcos said he hopes to make his birthday a chance to show that addressing environment concerns are important.