The green king: Charles the environmentalist 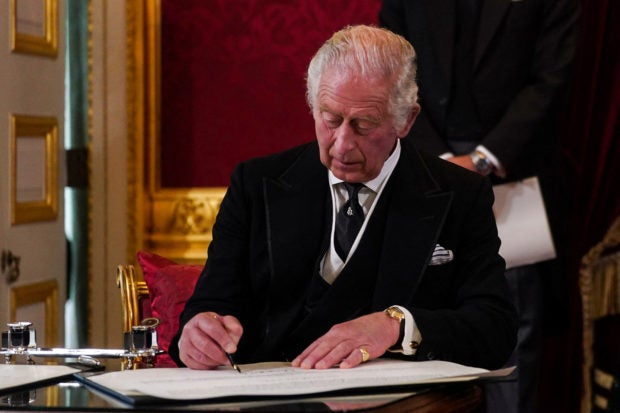 Britain’s King Charles III signs an oath to uphold the security of the Church in Scotland, during a meeting of the Accession Council inside St James’s Palace in London on September 10, 2022, to proclaim him as the new King. AFP

LONDON — Britain’s new King Charles III is a committed environmentalist with a long history of campaigning for better conservation, organic farming and tackling climate change, which is likely to sit well with more eco-conscious younger Britons.

Interspersed between photos of official meetings and other royal duties, his Instagram account as Prince of Wales typically featured pictures showing him furthering environmental causes in Britain and beyond.

They included planting trees, showing off organic fruit and vegetables from his Clarence House residence and colourful flowers growing in the garden at his beloved Highgrove House in Gloucestershire, western England.

One photo even captured Charles — who has now passed the prince of Wales title to his son and heir William — on a visit to threatened mangrove swamps in St Vincent and Grenadines in the Caribbean.

When Britain hosted the COP26 climate summit in Scotland last year, he gave the opening speech, urging world leaders seated in front of him to redouble their efforts to confront global warming and warning: “Time has quite literally run out.”

Since his first big public speech on the subject in 1970, Charles has “been raising awareness about all aspects of the environment for a very long time,” said Bob Ward, of the Grantham Research Institute on Climate Change and the Environment.

“In many ways he has been ahead of the public awareness and political awareness” on the issue, he told AFP.

At Highgrove, Charles has cultivated a garden, which is open to the public, as well as a fully organic farm.

It initially left some neighbouring farmers sceptical, but has gradually become a successful business and sells its produce under the “Duchy Organic” brand in the high-end supermarket chain Waitrose.

“His Royal Highness has taken many steps personally to live in a more sustainable way,” his official website for his tenure as prince of Wales said.

For several years Charles has published his annual carbon footprint — including unofficial travel — which amounted to 445 tonnes in the year to March 2022.

His car, an Aston Martin owned for over 50 years, has been modified to run on surplus English white wine and whey from the cheese-making process.

It runs on a mixture of 85 percent bioethanol, and 15 percent unleaded petrol.

The monarch has been president of the WWF-UK animal charity since 2011, emulating his late father Prince Philip, who performed the same role from 1981 to 1996.

He is also the patron of several other associations, such as “Surfers Against Sewage”, and made numerous speeches warning of the disappearance of biodiversity.

More recently, in April, he wrote an article for Newsweek magazine — and also graced its cover — headlined “our children are judging us”.

His vocal stances on issues including the environment have prompted some criticism that he is departing from constitutional norms which see the royal family remain politically neutral at all times.

Charles has repeatedly vowed to remain true to constitutional practices, as recently as this week when he ascended to the throne.

But he may not see environmental and conservation causes as overtly political.

“He would be very sensitive as a head of state,” predicted Ward.

“He must be very careful about being seen to act in a way that might be seen as putting pressure on the government. But I don’t expect him not to speak at all.”

Ruby Wright, a 42-year-old illustrator who came to Buckingham Palace to pay her respects to the late Queen Elizabeth II, said on Friday that she hopes “he sticks to his guns”.

“I think he needs to be more modest and really push the environmental agenda and make that his legacy,” she told AFP.

“I know he’s not allowed to be political at all but this isn’t politics. This is the future of humanity.”

Laura Beirne, a 30-year-old fashion designer, agreed. “I think it’s positive he supports the environment. That’s important, I think, for my generation.”

As king, he will have less time for his passions of gardening and farming. He admitted in an interview in 1986 that he talked to plants, attracting some mockery.

But the baton has already been passed to his son William, who shares his commitment to the environment.