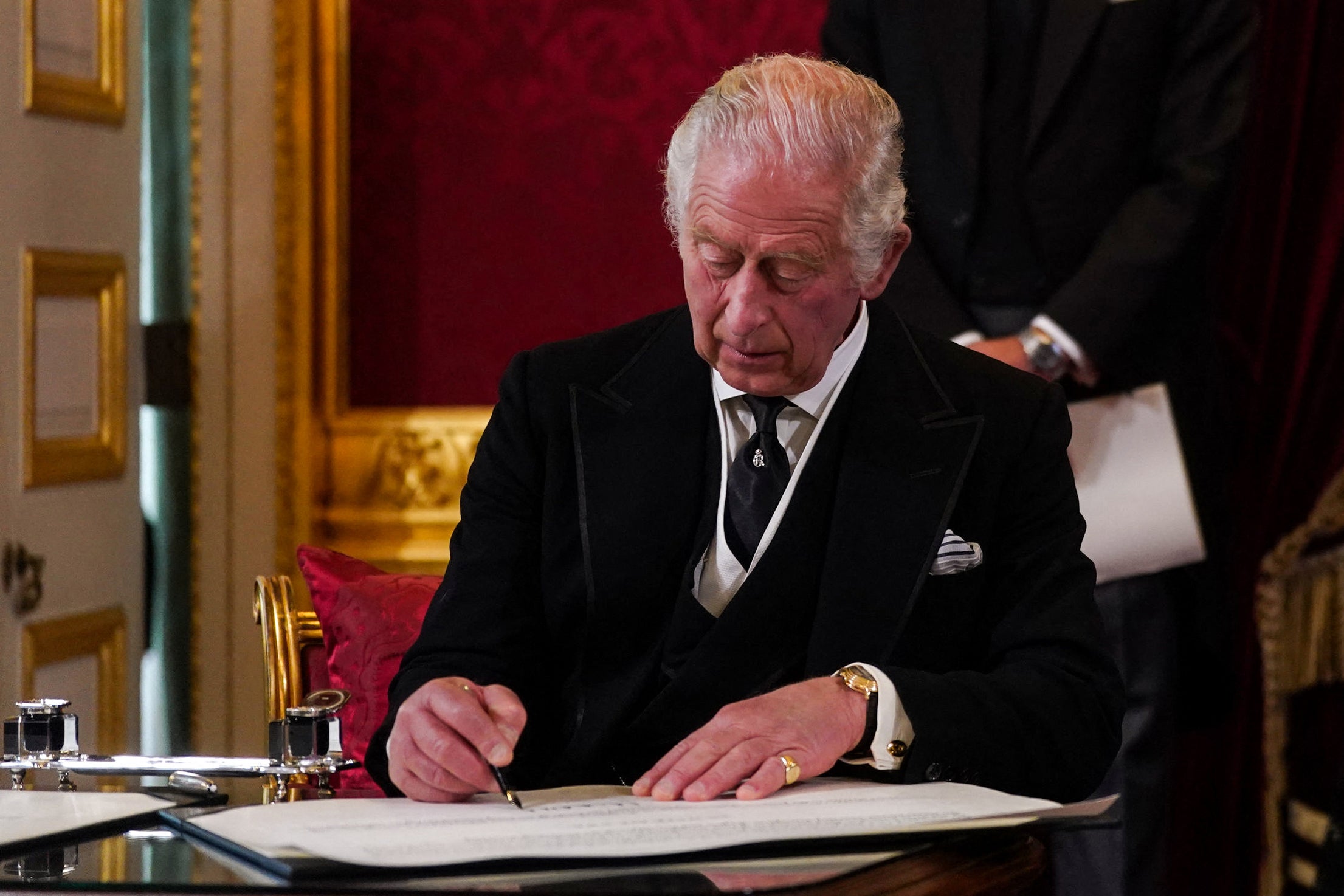 Britain’s King Charles III signs an oath to uphold the security of the Church in Scotland, during a meeting of the Accession Council inside St James’s Palace in London on September 10, 2022, to proclaim him as the new King. – Britain’s Charles III was officially proclaimed King in a ceremony on Saturday, a day after he vowed in his first speech to mourning subjects that he would emulate his “darling mama”, Queen Elizabeth II who died on September 8. (Photo by Victoria Jones / POOL / AFP)

Here is the new king’s declaration to the Accession Council, a centuries-old body of senior British royals, and political and religious leaders:

“My Lords, Ladies, and Gentlemen. It is my most sorrowful duty to announce to you the death of my beloved mother, the queen.

“I know how deeply you, the entire nation — and I think I may say the whole world — sympathise with me in the irreparable loss we have all suffered.

“It is the greatest consolation to me to know of the sympathy expressed by so many to my sister and brothers and that such overwhelming affection and support should be extended to our whole family in our loss.

“To all of us as a family, as to this kingdom and the wider family of nations of which it is a part, my mother gave an example of lifelong love and of selfless service.

“My mother’s reign was unequalled in its duration, its dedication and its devotion. Even as we grieve, we give thanks for this most faithful life.

“I am deeply aware of this great inheritance and of the duties and heavy responsibilities of sovereignty which have now passed to me.

“In taking up these responsibilities, I shall strive to follow the inspiring example I have been set in upholding constitutional government and to seek the peace, harmony and prosperity of the peoples of these islands and of the Commonwealth realms and territories throughout the world.

“In this purpose, I know that I shall be upheld by the affection and loyalty of the peoples whose sovereign I have been called upon to be, and that in the discharge of these duties I will be guided by the counsel of their elected parliaments.

“In all this, I am profoundly encouraged by the constant support of my beloved wife.

“I take this opportunity to confirm my willingness and intention to continue the tradition of surrendering the hereditary revenues, including the Crown Estate, to my government for the benefit of all, in return for the sovereign grant, which supports my official duties as head of state and head of nation.

“And in carrying out the heavy task that has been laid upon me, and to which I now dedicate what remains to me of my life, I pray for the guidance and help of Almighty God.”