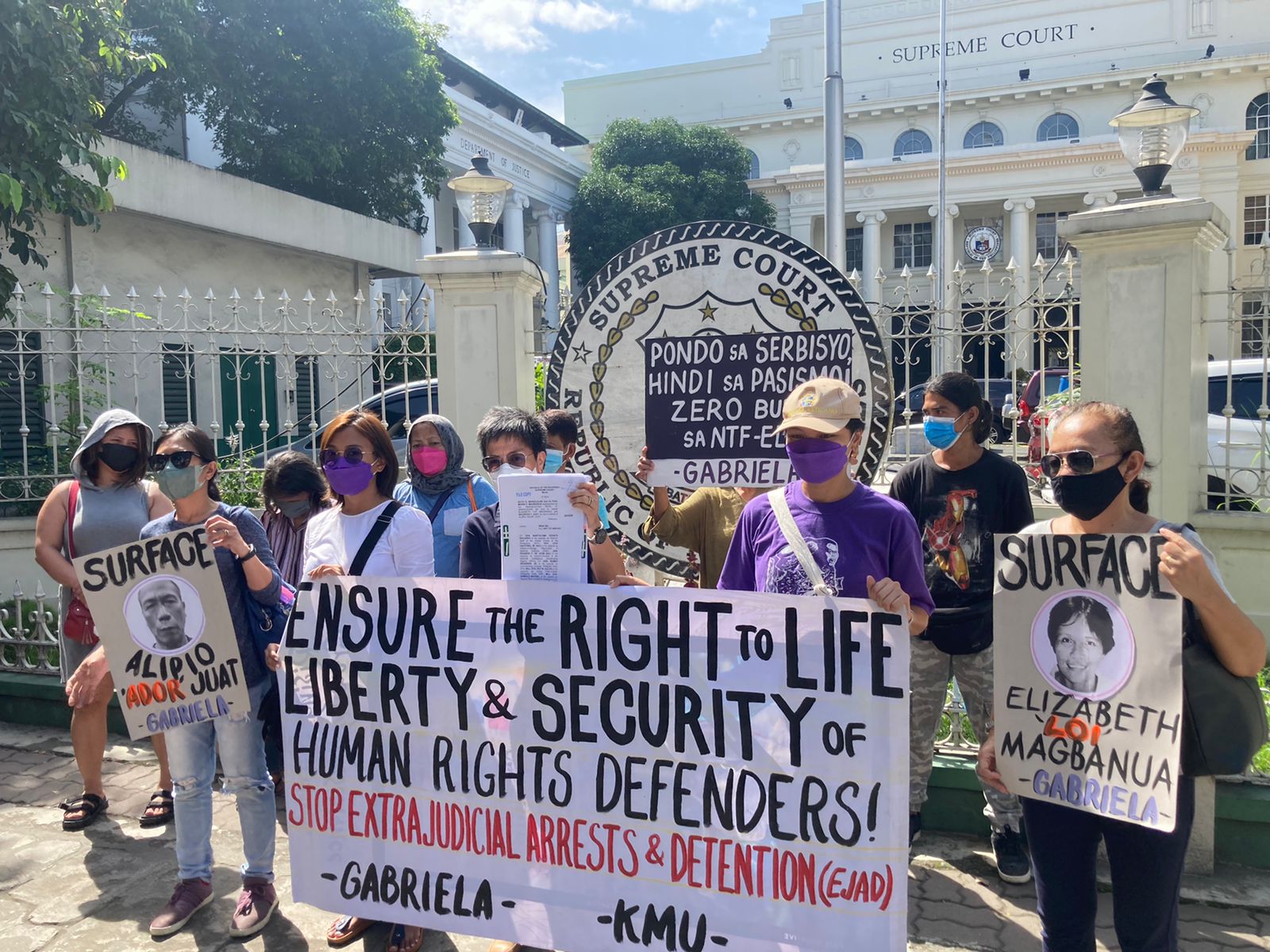 Gabriela and Kilusang Mayo Uno (KMU) members accompany relatives of community workers Elizabeth “Loi” Magbanua and Alipio “Ador” Juat on Wednesday, August 10, 2022, in asking the Supreme Court via writ of amparo to protect and help locate the two individuals who are missing for weeks now. Photo from JUCRA Pool

MANILA, Philippines — The Court of Appeals has held the military accountable for the disappearance of labor organizers Elizabeth Magbanua and Alipio Juat and ordered top security officials to speedily locate the disappeared activists.

“Without any specific pronouncement on exact authorship and responsibility, [the Court] declare(s) the respondents (military) accountable for the enforced disappearance and continued disappearance of Magbanua and Juat,” the court said on Friday in an order granting the writ of amparo sought by the activists’ families.

Magbanua, a women and workers’ rights activists, and Juat, a Marcos martial law survivor and activist, were last seen on May 3 in a meeting with other activists in Valenzuela City when they were nabbed by government troops.

The appellate court also ordered the impleaded officials to “cause the speedy conduct of a comprehensive and exhaustive investigation using extraordinary diligence on the continued disappearance of Magbanua and Juat.”

The security officials were also ordered to “utilize all technical and modern technological resources at its disposal to assist in locating their whereabouts and once and for all determine the truth behind their continued disappearance.”

The security officials were given six months to submit a “detailed written report explaining the results of their action.”

Magbanua’s life partner Ruth Manglalan and niece Alyssa Magbanua, together with Juat’s daughter Maureen Juat filed a petition for a writ of amparo with the Supreme Court last Aug. 10.

Magbanua’s relatives said they have not heard from her since May 3. On the other hand, Juat’s daughter said he visited his other daughters on four occasions since his May 3 disappearance, and that he told his daughters he is being held in the military headquarters, Camp Aguinaldo in Quezon City.

In Aug. 23, the Supreme Court ordered the Court of Appeals to hold a summary hearing on Aug. 30 and issue a decision within 10 days after hearing the case.