Marcos gets $14.36B investment deals from Indonesia, Singapore | Inquirer News

Marcos gets $14.36B investment deals from Indonesia, Singapore 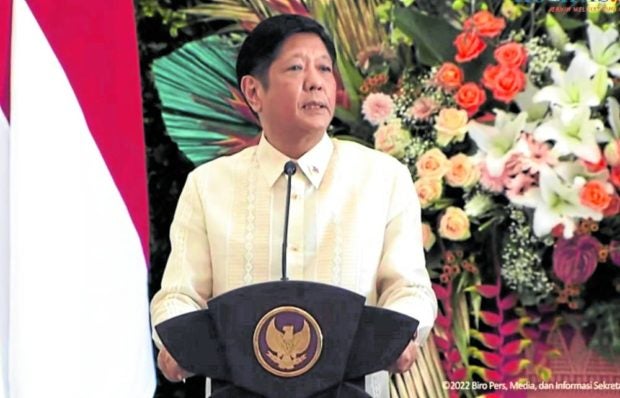 MANILA, Philippines — President Marcos brought home $14.36 billion, or P804.78 billion, in investment pledges from Indonesia and Singapore seen to aid the country’s economic recovery from the impact of the COVID-19 pandemic.

The President returned to the Philippines on Wednesday night following state visits to Jakarta and Singapore over the past four days, his first official trip as President.

He and his delegation, composed mostly of his economic team, arrived at Ninoy Aquino International Airport Terminal 2 at 10:23 p.m.

They were welcomed by Vice President Sara Duterte, Executive Secretary Victor Rodriguez and other government officials.

In his arrival speech, the President said the Philippines signed a total of 10 letters of intent and 12 memorandums of understanding (MOUs) between Indonesia and Singapore in the sectors of renewable energy, data centers, e-commerce, broadband technology, startups, and government housing and agriculture.

In his Indonesia trip, Marcos reaped $822 million worth of investment pledges in textiles, garments, renewable energy, satellite gateway, wire global technology and agrifood; $7 billion in infrastructure for unsolicited private-public partnerships such as a C-5 four-level elevated expressway; and $662-million trade value for the supply of coal and fertilizer.

In Singapore, the President secured a total of $6.54 billion or P374.57 billion worth of foreign direct investments, which is expected to generate jobs to an estimated 15,000 Filipino workers according to Malacañang.

Singaporean businessmen also pledged to invest $5 billion worth of electronic tricycles, which is seen to lessen air pollution emitted by an estimated 3.5 million tricycles in the country.

Marcos also secured the investment of the new technology of floating solar worth $1.2 billion and the setting up of an in-country Data Center in the Philippines valued at $200 million.

Singaporean businessmen also wanted to venture in the “Blue Economy,” in which they will be expected to invest from $10 million to $100 million in areas such as marine renewable energy, water production, desalination, electric boats as well as aquaculture.

“These investments, if we put it all together, value $14.36 billion or P804.78 billion,” the President said in his arrival speech.

“This will support our country’s economic recovery efforts and create more jobs for Filipinos here in our country,” he added.

Marcos assured Filipinos that the government would work hard “to bring all of these proposals to fruition.”

During his trips to Indonesia and Singapore, the President also discussed with his counterparts regional and global issues, including the maritime dispute in the South China Sea.

The total of the investment pledges released by the Office of the Press Secretary (OPS) amounted to $15.02 billion, higher than the $14.36 billion announced by the President. The OPS did not respond to repeated requests for clarification. INQ

Read Next
Tearful crowds sing ‘God Save the Queen’ at Buckingham Palace
EDITORS' PICK
House energy committee chair Arroyo bats for cheap electricity
Sierra Madre stands up to Karding, but needs protection vs the humans it saves
UNFPA Philippines Career Opportunities
Karding damage to infrastructure at P23M
Reignite your passion with the vivo Y35
Bongbong Marcos says PH ‘open for business’ with new Clark Airport terminal
MOST READ
Angelica Panganiban ‘duguan, sugatang mom’ one week into breastfeeding
Badoy not with Office of the President, NTF-Elcac, under Marcos admin — solon
LPA enters PAR, may develop into tropical depression
Kris Aquino offers help for Lolit Solis’ dialysis needs amid her own illnesses
Don't miss out on the latest news and information.