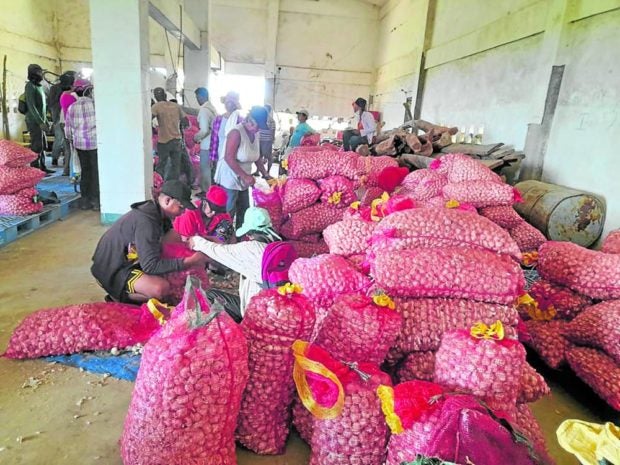 ITBAYAT, BATANES — Officials in the northernmost province of Batanes on Thursday confirmed that there was an overproduction of local garlic, especially in this town, prompting Gov. Marilou Cayco to appeal to the public to buy the crop from farmers.

Donabel Gulaga, municipal agriculturist, said the oversupply of garlic in the province was due to a high yield between March and April this year.

She said at least 24 metric tons (MT) of garlic were already bought by the Department of Agriculture (DA) from the Itbayat Garlic Production Association.

DA’s Batanes Experimental Station, which offers courses on crop production, bought some of the garlic harvest “solely as planting materials,” Gulaga told the Inquirer in a text message.

“But we still have more left and this is the reason why the provincial government bought 30 MT,” she said.

According to Cayco, about 20 MT of garlic are still available in the province, adding she is worried that local farmers will stop producing the crop if there are no buyers.

The governor, during the televised Laging Handa briefing on Thursday, said the remaining supply came from Itbayat, the northernmost island of the country which is closest to Taiwan. Organic garlic grown and harvested in Batanes is sold at P100 a kilo in local markets.

“I feel sorry for the farmers, they might be discouraged from planting if their products are not sold,” she said.

Cayco, however, said provincial officials were relieved after they were informed that buyers from Metro Manila, Isabela, Tuguegarao City in Cagayan and the Ilocos region heeded their call.

According to the governor, the DA will also help the province sell its garlic products. “They (DA) want to talk to our farmers so that every harvest [season], they will have sure buyers,” she said.

Data from the Bureau of Plant Industry (BPI) presented during a House hearing on Aug. 29 showed that the country has been heavily dependent this year on garlic imports to meet local demand.

For the second half of the year, the Philippines has a projected demand of 73,000 MT of garlic but the available supply is just about 37,000 MT.BPI said the total supply of 20,653 MT for the third quarter this year were all imported but still not enough to meet the total demand of 36,945 MT.

“Its sufficiency is admittedly a problem we’ve been facing. Improvement in production yield and quality of our garlic is also something that we have to work on,” Kristine Evangelista, agriculture undersecretary for consumer affairs and the agency’s spokesperson, told lawmakers.