Face mask to be optional when outdoors nationwide | Inquirer News

Face mask to be optional when outdoors nationwide 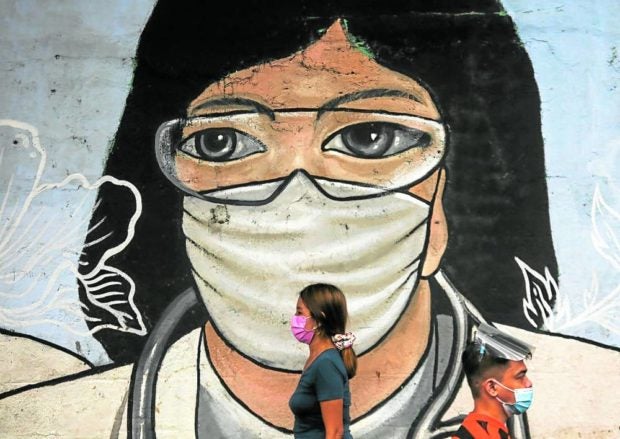 Passersby – with and without a face shield – walk past an artwork of a health worker wearing a face mask and eye shields on Recto Avenue in Manila. (File photo by LYN RILLON / Philippine Daily Inquirer)

MANILA, Philippines — The government has decided to make the wearing of face masks voluntary in open spaces nationwide, a major policy shift to relax COVID-19 protocols as the country transitions to the “new normal” of treating the virus as endemic just like the ordinary flu.

Malacañang announced on Wednesday that the Inter-Agency Task Force for the Management of Emerging Infectious Diseases (IATF) has recommended the lifting of the mandatory wearing of face masks in outdoor areas.

In a press briefing conducted via videoconferencing from Singapore, Press Secretary Trixie Cruz Angeles said the IATF issued the resolution last Monday and that President Marcos would soon issue an executive order (EO) approving the new policy and other guidelines that the task force has proposed.

“According to the IATF, their recommendation is to liberalize our mask mandate and make mask-wearing outdoors voluntary across the country. It becomes optional in open spaces or noncrowded outdoor areas with good ventilation, provided that senior citizens and immunocompromised individuals are highly encouraged to wear their masks, to continue wearing masks,” Angeles said.

Angeles, who was joined by Department of Health (DOH) officer in charge Undersecretary Maria Rosario Vergeire and Interior Secretary Benhur Abalos from Malacañang, added that the total lifting of the mask mandate would be pilot-tested toward the end of the year, provided there is an improvement in the COVID-19 booster vaccine coverage.

Vergeire clarified that the partial lifting of the mask mandate was not yet government policy and that the EO to be issued would serve as the legal instrument or the approval for the implementation of the policy.

Abalos said the IATF recommendation came after he referred to the body the Cebu City government’s new policy making the wearing of masks in public places non-obligatory.

Abalos said the Philippines and Myanmar were the only remaining member states of the Association of Southeast Asian Nations (Asean) that have not yet completely or partly lifted the mask mandate.

He said in Cambodia, Brunei, and Thailand, the wearing of masks became voluntary starting April 25, April 29, and June 24, respectively. In Indonesia, wearing face masks outdoors was no longer mandatory as of May 17, while in Malaysia, it was required only indoors and in public transport starting May 1.

In Vietnam, wearing a face mask is mandatory in public transport and crowded public places, while in Singapore, it was required starting last month only for people 6 years old and above in health-care facilities and in public transport.

Abalos also cited data from selected Asean countries correlating foreign tourist arrivals and the increase in COVID-19 cases. In Singapore, Malaysia, Thailand, and Vietnam where the mask mandate was partly or completely lifted, COVID-19 cases decreased despite the influx of foreign tourists.

Vergeire, who earlier criticized the Cebu City government’s policy, said face masks would still be a must in public transportation since it is considered as a “crowded setting.”

In outdoor spaces that are covered, poorly ventilated, and crowded, people are also encouraged to wear masks and it will be up to local authorities to issue instructions.

Vergeire said parents should also “give extra protection” to their children who are going to in-person classes by encouraging them to wear face masks during the entire time that they are in the school campus.

She also noted that people with COVID-19 symptoms who go outdoors should wear face masks even if the places are not crowded.

“We all need to help each other so that we know what should be the good practice of determining whether we wear our mask or we don’t wear our mask,” she said.

Aside from the wearing of a face mask, Vergeire said there are five other government-sanctioned “layers of protection” against COVID-19 that must be complied with, namely, frequent hand-washing, physical distancing, avoidance of crowding, good ventilation, and vaccination.

“Our countrymen should understand the risk factors which can be mitigated if we implement these different measures. If you do all of them—that’s six out of six—you have adequate protection,” she said.

At a House hearing of the committee on health on Wednesday, Vergeire said the government’s pandemic response was headed in the direction of “slowly shifting to a new normal,” or treating COVID-19 as “endemic.”

“Since we have been seeing less and less of the deaths and less of the severe and critical [cases], and we see people are highly mobile these past months, we are seeing that the acceptability of this kind of situation is there already,” Vergeire said.

She emphasized that booster coverage has to be considered in such a transition to endemicity to ensure a “science-based” protection.

“One of the considerations when you talk about endemicity is the immunity of the population because as you lessen the restrictions in the population, we need safeguards in order for us to ensure that people will still be protected,” Vergeire said.

Angeles said all agencies of the government were urged to support the “national booster week” scheduled from Sept. 26 to 30.