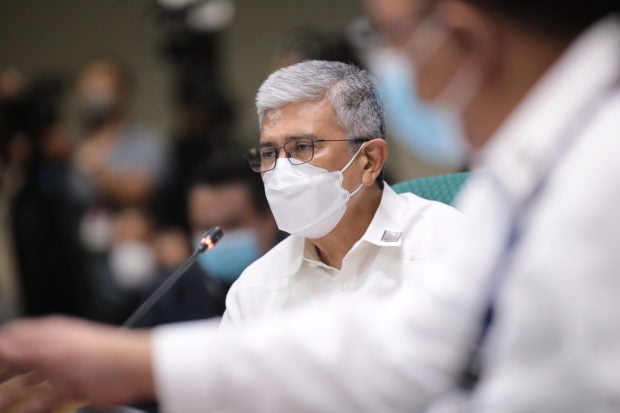 MANILA, Philippines — President Ferdinand Marcos Jr. broached the idea of importing 600,000 metric tons (MT) of sugar during an Aug. 4 meeting with the Sugar Regulatory Administration (SRA), a resigned official of the agency told the Senate blue ribbon committee on Tuesday.

In a virtual appearance before the Senate antigraft panel, former SRA Administrator Hermenegildo Serafica recalled that in an online meeting, the president made the suggestion, but that he objected to it, saying the volume “might be too much.”

But Executive Secretary Victor Rodriguez, who arrived at the Senate hearing just minutes after Serafica made the statement, “flatly” denied this, saying Marcos “never gave such instructions” to the SRA, although he admitted that Malacañang had already established the need to import.

“The president did not say anything specific as to the metric tons. We only got caught up in this mess because of the import plan and other
issues surrounding the planned importation of 300,000 (MT),” Rodriguez told the committee.

While Rodriguez confirmed the Aug. 4 meeting, he refuted Serafica’s statement of attending it online, saying the former SRA head was physically present in the executive secretary’s office in Malacañang.

When asked by Senate President Aquilino Pimentel III whether others, including President Marcos, joined the meeting online, Rodriguez said he has yet to check.

“The committee can rest assured that I’ll determine whether there was a hybrid meeting or there were other participants online, and what I can assure you is that if there was one, the committee will know,” he said.

Committee chair Sen. Francis Tolentino then requested Rodriguez to furnish the committee with a transcript of the online meeting “to clarify the issues.”

Serafica made the revelation as he was quizzed on the contents of his Sept. 2 supplemental affidavit on SRA’s botched plan to import 300,000 MT of sugar, as contained in the controversial Sugar Order No. 4.

“And I said that Mr. President, that may be too much because starting Aug. 1, [millers] have already accepted cane delivery from farmers and anytime this week, they will start milling, and former board member Valderrama can confirm this, your honor,” he said.

Valderrama, who was also appearing online before the committee, confirmed Serafica’s account.

“Yes, this was discussed in our Zoom meeting together with the President and he mentioned the 600,000, but former Administrator Serafica said that it might be too much because the milling season is about to open,” he said.

Hearing Serafica reiterate his earlier statement that it was the chief executive who came up with the suggestion of importing 600,000 MT, Senate President Juan Miguel Zubiri again rushed to Marcos’ defense.

“The President was opposed to the importation of 300,000 (MT of sugar), and now you are claiming he wanted 600,000 tons? It is impossible; the President will not come up with a figure on the top of his mind,” he said.

“You better clarify, Mr. Serafica, you are close to being cited for contempt,” warned Zubiri, who belongs to a family of sugar producers in Bukidnon province.

Pimentel hinted that there was nothing illegal about Marcos broaching the 600,000 volume as part of what could be mere “brainstorming” activity, and lamented how SRA officials have already been “condemned as liars.”

Rodriguez’s last-minute appearance averted a looming showdown with the Senate, as it was about to serve its subpoena to compel the executive secretary to face the blue ribbon committee.

Earlier in the hearing, the committee went into a closed-door session and voted 11-3, with three abstentions, in favor of issuing a subpoena to Rodriguez despite an earlier notice of absence due to “conflicts in [his] schedule.”

Tolentino later told reporters that he would wrap up the investigation and release the committee report on Thursday.

Meanwhile, the Bureau of Customs (BOC) on Tuesday said that more inspections would be conducted in coordination with other government agencies in a bid to uncover storage facilities alleged to be hoarding sugar.

Customs Commissioner Yogi Filemon Ruiz issued the statement following the discovery of some P1.8 billion worth of imported goods, including local and imported sugar, in a warehouse in Nasugbu, Batangas, last Sunday.

Armed with a letter of authority and mission order issued by Ruiz, the inspection team found 181,299 50-kilo sacks of imported refined sugar from Thailand and 197,590 sacks of the local Don Pedro white sugar inside the facility.

The BOC said the inventory of the imported goods and sugar found in the warehouse would be led by the assigned Customs examiners and would be witnessed by CIIS, Enforcement and Security Service, and representatives of the warehouse.

In the meantime, it said the team has temporarily padlocked the warehouse.