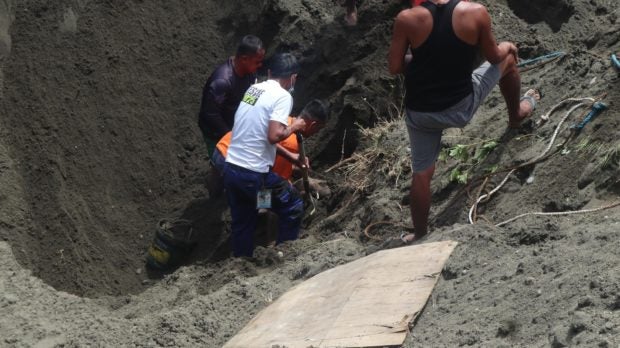 Rescuers pull the body of a 63-year-old man trapped under the rubble while making a well in Gonzaga town, Cagayan province. (Photo courtesy of MDRRMO Gonzaga)

TUGUEGARAO CITY — A 63-year-old worker was trapped under the rubble on Monday while digging up the ground in Gonzaga town, Cagayan province, the police said.

Investigators said Marlon Jimmy Ventura Sr. was digging to make a well in Barangay Ipil when the loose soil caved in.

Edward Gaspar, head of the Gonzaga disaster risk reduction management office, said Ventura was already dead when responders arrived and tried to pull him from the rubble.

Despite his age, Ventura had been accepting work as a laborer to support his three children, his relatives said. INQ