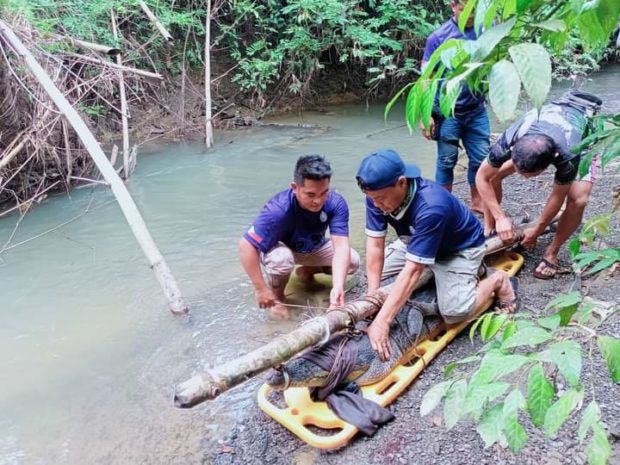 A saltwater crocodile is being released back to its natural habitat after it was caught by a resident of Barangay Puring in Bataraza town, Palawan province on Sunday, Sept. 4. (Photo courtesy of Palawan Council for Sustainable Development Staff)

PUERTO PRINCESA CITY, Palawan—An 8.6-foot long saltwater crocodile was caught and turned over to authorities by a resident of Barangay Puring in Bataraza town south of this province on Sunday, Sept. 4.

The reptile, which is 1.3-foot wide, had been turned over to the Palawan Council for Sustainable Development Staff (PCSDS), a local government organization.

According to the PCSDS, the animal was released back to its natural habitat with the help of Bataraza police and the municipal disaster risk reduction and management office.

Last month, a 2.21-meter-long juvenile saltwater crocodile was rescued after it was entangled in nylon ropes at Barangay Macarascas in this city.

Villagers found the trapped crocodile in a mangrove area and was rescued by a team from the PCSDS and Palawan Wildlife Rescue and Conservation Center. INQ

Your subscription could not be saved. Please try again.
Your subscription has been successful.
Read Next
Man slain by motorcycle-riding gunmen in Batangas
EDITORS' PICK
Omega Speedmaster super racing: Tiny device massive change
Fuel price rollback expected on Feb 7
House energy committee chair Arroyo bats for cheap electricity
Philippine-United States alliance ‘rock solid’ — DFA
Makabayan bloc blasts bid to expand US access to more military bases in PH
vivo Philippines offers a free bouquet of flowers and a premium necklace perfect for Valentine’s Day
MOST READ
Vice Ganda gets called out for ‘unfair treatment’ of ‘It’s Showtime’ co-host Karylle
Fuel price rollback expected on Feb 7
Kris Aquino gets ‘renewed confidence’ after consultation with new doctor: ‘I have a strong chance of getting better’
Pokwang tells self amid revelations on past relationship: ‘Bangon, nanay ka’
Don't miss out on the latest news and information.