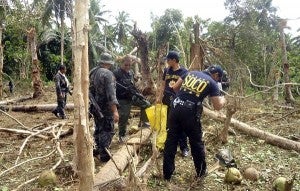 Philippine National Police Special Action Forces and SOCO investigators examine the site on Jolo Island where three most wanted leaders of the al-Qaida-linked terrorist groups Abu Sayyaf and Jemaah Islamiyah were killed in a US-backed dawn airstrike in February. AP

MANILA, Philippines—Concealed by the night sky, the two aging Philippine Air Force planes unleashed a surprise high-tech weapon: US satellite-guided bombs that whizzed down with deadly precision toward a long-elusive terrorist suspect and two other top radicals dozing with their men in Jolo Island’s jungle.

The use of smart bombs, confirmed to The Associated Press by four senior Philippine security officials, marks a new chapter in the long-running battle against an al-Qaida-linked movement in Mindanao, viewed by the US as a key front in the global effort to keep terrorists at bay.

Successive blasts shattered a hillside rebel encampment of Abu Sayyaf, which remains one of Southeast Asia’s most violent groups despite a decade of battle losses. The Vietnam War-era turboprops roared away after delivering a bull’s-eye hit near mountainous Parang town around 3 a.m. on February 2.

Thermal imaging from a US drone, described by two of the senior officials, depicted the aftermath: Several slain gunmen lay amid a clutter of destroyed trees, huts and tents, while survivors pulled away the dead and wounded in the pitch darkness.

Although it remains unclear whether all three of the most-wanted terrorists were killed, the introduction of smart bombs reflects shifting battlefields and strategies.

The US has been assisting the Philippine military since shortly after the September 11 attacks, providing advice, training, and intelligence, including drone surveillance, but the smart bombs are the first major high-tech hardware supplied to the Philippines.

They offer a less manpower-intensive way to combat Abu Sayyaf at a time when both the Philippines and the US militaries want to focus resources on tensions with China in the West Philippine Sea (South China Sea). They also dovetail with a change in recent years from massive offensives to surgical, intelligence-driven strikes that target holdouts of the battered Abu Sayyaf.

The four senior officials said the strike on the Abu Sayyaf lair employed GPS-guided bombs, a previously unavailable technology acquired from the United States under a confidential military assistance project. They spoke on condition of anonymity because they aren’t authorized to discuss those details with the media.

A Philippine military document detailing the project, a copy of which was seen by the AP, said that US defense contractor Raytheon Co. was to deliver 22 kits last year to convert conventional bombs into precision-guided munitions that could be launched from the OV-10 turboprop. Accompanying that was crew training, equipment upgrades to allow the OV-10s to deploy the bombs and two test runs.

A military spokesman, Colonel Arnulfo Marcelo Burgos, said the Armed Forces of the Philippines “neither confirms nor denies the existence of such munitions citing operational security reasons. However, its pilots have been training vigorously to further improve their proficiency particularly in the precise delivery of munitions to its identified target.”

Many Western, Middle Eastern and Asian countries have acquired smart bombs since they were first widely used by the US-led coalition in the 1990-91 Gulf War. They have guidance kits and fins and use the US GPS satellite system, laser and other technologies to zero in on targets.

Gazmin would not respond to questions about the new bombs in an interview with The AP last week, but he said that technology from the Americans has given the military lifesaving skills such as enabling pilots to fly at night. Training with US forces has focused on ways to avoid harming noncombatants and wasting resources, he said, citing last month’s airstrike.

“We were able to trace that they were all together at a certain time so that was the time to hit,” Gazmin said. “So we took off early morning and bombed them, delivering four bombs. We were successful.”

But doubts have arisen about the fates of the two foreign terrorists, and two government reports seen by the AP contend that Marwan and Muawiyah survived the airstrike with minor wounds after they heard the buzz of the OV-10s and fled.

Between nine to 15 militants were killed in the barrage but others quickly dragged away the dead, making it difficult to confirm who was killed, according to military officials.

Marwan is on the FBI list of most-wanted terrorists and has a $5 million bounty on his head. Jumdail had been a key target because he sheltered foreign radicals such as Marwan and Muawiyah and has been blamed for deadly bombings and kidnappings.

The military presumes they are dead until an investigation shows otherwise, spokesman Burgos said, though he added that huge cash rewards for informants who helped find the militants have been put on hold.

The airstrike shook the militants, according to the government reports. The precision of the attack, and that it came in the dark, told them that they were being targeted by more advanced technology. It also indicated there were government spies in their ranks and reinforced fears that harboring foreign fugitives would make them magnets for attack.

“They have become very wary of things and equipment that are being brought into their camp, suspecting these were laden with beacons that can be used to track them,” Gazmin said.

Marwan and Muawiyah were lying low with gunmen in a Jolo mountain stronghold, the government reports said, but the Abu Sayyaf commander in the area, Radulan Sahiron, ordered them out.

Sahiron, who is in his 70s and the group’s most senior commander, has long been wary of outsiders — unlike Jumdail, who also had been treating ill villagers as a quack doctor, providing a window for government surveillance.

The Abu Sayyaf — or Bearer of the Sword — was founded in 1991 on southern Basilan Island. With an unwieldy collective of preachers and outlaws, it vowed to wage jihad, or holy war, but lost its key leaders early in combat, sending it on a violent path of extremism and criminality.

Today, it has degenerated into a few loose factions with 381 ragtag fighters and no central leader. But the group remains resilient and is more violent, a military assessment said, citing 74 atrocities committed last year, including 17 kidnappings, 16 bombings and 14 killings and ambushes — far more than each of the five previous years.

Still its setbacks are reflected in a poster of the most-wanted terrorists printed nearly 10 years ago by the US and Philippine governments. Of the 24 portraits, 19 have been killed or captured. The deaths of two — Marwan and Jumdail — are unconfirmed. Only three others remain at large.

Read Next
Corona’s approval rating dips further in latest Pulse Asia survey
EDITORS' PICK
Ahead of ONE: Full Blast II, Mongkolpetch warns Elias Mahmoudi: ‘Watch out for my fists’
COVID situation still ‘very fragile’ due to surge in regions – DOH
1Sambayan names 6 choices to pit vs Duterte’s annointed in 2022
Kai Sotto continues to inspire Filipinos by sharing his passions and stories with Smart Prepaid
Alex Eala wins Grand Slam on Independence Day: ‘I hope I made my contribution to the country’
COLUMN: Making the republic work
MOST READ
1Sambayan names 6 choices to pit vs Duterte’s anointed in 2022
Robredo still undecided, making supporters uneasy
Nancy, Isko asked to pull out of 1Sambayan nomination, says Carpio
1Sambayan bares nominees for president, vice president in 2022 polls
Don't miss out on the latest news and information.