Tolentino: Rodriguez may miss hearings on sugar issue due to packed schedule 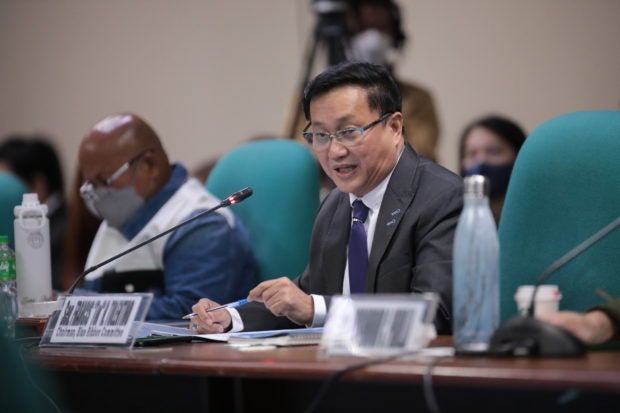 MANILA, Philippines — Despite the ongoing scrutiny on the sugar importation mess, Executive Secretary Vic Rodriguez may not be able to attend hearings due to Cabinet meetings and the scheduled state visits of President Ferdinand Marcos Jr.

The development was revealed by Senator Francis Tolentino, chair of the blue ribbon committee investigating the sugar import fiasco.

(The Executive Secretary has a letter for me that in the next hearings — he respects the Senate’s invitation, that is why he was there during the first hearing, but because of his duties like Cabinet meetings and state visits — he may not be able to attend the hearings.)

Marcos is scheduled to visit Indonesia and Singapore and attend the 77th United Nations General Assembly within the month.

According to Tolentino, Rodriguez believes that he has answered the questions directed to him about the “illegal” sugar importation order.

(He believes that he has responded to the questions because he volunteered to go to the Senate, and Sugar Order No. 4 was merely a draft and is still being studied and evaluated.)

The senator likewise noted that the blue ribbon committee might just hold one more hearing on the issue.

(If we follow the structure of hearings, the release of evidence is put against the number of witnesses.)

(Just one more in-depth hearing to have a conclusion. Because if we stretch it, we will just go around. While we’re going around, it seems like a television series.)

Tolentino assured the public that someone would be held accountable for the matter.

“Meron po. Hindi lang ako magbabanggit ng pangalan,” he said when asked if there is a person who will be liable.

(There is. I will not mention names.)

So far, the Senate blue ribbon panel has conducted two hearings on the sugar importation mess.

The probe stemmed from the Sugar Regulatory Administration’s Sugar Order No. 4, which authorizes the importation of 300,000 metric tons of sugar, which Marcos Jr. immediately disowned.

Read Next
PH loss from too much, or zero, water seen to hit $124B of GDP
EDITORS' PICK
SC warns vs inciting attacks against judges
Newbie gamers are in for a treat with the power-packed feature of vivo Y16
House energy committee chair Arroyo bats for cheap electricity
Bloodbath at PSE; peso falls to new low
Reignite your passion with the vivo Y35
ICC prosecutor rejects PH gov’t call to stop resumption of probe
MOST READ
‘Sardinas ang ulam’: Senators lament soldiers’ P150 daily subsistence allowance
‘Leni’, ‘Nasaan si Leni?’ trend on Twitter as netizens look for ex-VP Robredo amid Karding
Charges readied vs gov’t guard with P290-M deposits
UP, other schools’ skipping of full face-to-face classes irks Pia Cayetano
Don't miss out on the latest news and information.