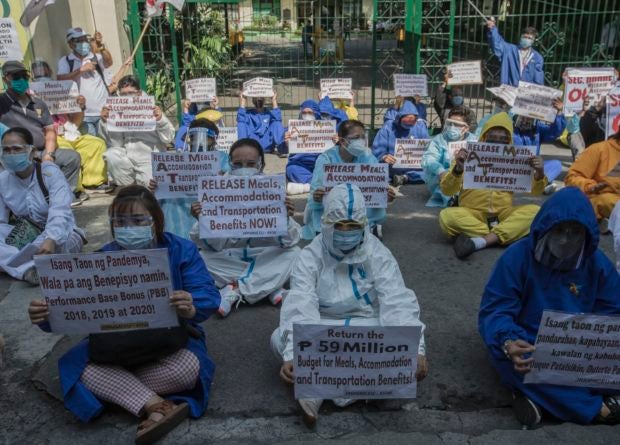 FILE PHOTO: About 200 nurses and public health workers in protective suits stage a “sit-down protest” outside the Department of Health building in Manila on Wednesday, June 30, 2021, the day the Bayanihan 2 stimulus spending law lapsed. The workers are demanding the release of their benefits, including a monthly P3,000 COVID-19 hazard pay. INQUIRER/RICHARD A. REYES

MANILA, Philippines – Several senators on Monday honored medical frontliners and other modern-day heroes in the commemoration of National Heroes Day.

In a series of tweets on Monday, Senator Jinggoy Estrada honored essential frontline workers who served during the pandemic, risking their lives for the safety of the Filipinos.

He commemorated the heroism of the country’s forebears who fought for the Philippines’ freedom.

“Today, we commemorate the heroism of our forebears who responded to the call of their times and fought for our freedom and laid the foundation upon which our nation proudly stands,” Estrada said.

“It is also befitting to honor today our present-day heroes – our health workers, teachers, uniformed personnel, service crew, and others who served as frontliners in battling the pandemic. Their dedication, courage, and daily sacrifices during this pandemic deserve our deepest gratitude and admiration,” he added.

Today we commemorate the heroism of our forebears who responded to the call of their times and fought for our freedom and laid the foundation upon which our nation proudly stands on. pic.twitter.com/WnTjAM2lXm

In a separate video message, Senator Sherwin Gatchalian hailed frontliners as “modern heroes” who sacrificed their lives, serving in the country’s battle against the pandemic.

(Today is significant because it is a day set aside to honor the past achievements of our nation’s heroes. With the help of our modern-day heroes, the COVID-19 frontliners, the country is slowly recovering from the pandemic after more than two years; that is a reason to celebrate.)

(Like Jose Rizal, Andres Bonifacio, Apolinario Mabini, and many more, our frontliners have shown us the true meaning of being a hero, which is to serve the Filipino people and the nation with no hesitation.)

For her part, Senator Nancy Binay honored past and present Filipino heroes. She also tweeted her message about the occasion.

(Thank you to all of our past and present Filipino heroes.)

Meanwhile, Senator Sonny Angara touted how Filipinos can triumph over any challenge once they unite.

For his part, Senator Lapid told Filipinos to remember the sacrifices of Filipino heroes made who gave up their lives to achieve the desired freedom, peace and independence of our country.

(Today, let us remember and give praise to our heroes who gave up their lives for the country’s freedom, peace and independence.)

Lapid likewise recognized and thanked modern heroes who continue to give their service to the Filipino people.

Senator Loren Legarda meanwhile proposed steps on how one can remember the valor of national heroes to achieve the country’s independence.

(First, let’s visit historic spots in our country so that we would know our heroes.)

(Second, as a family, we should read books or watch films about the lives of our heroes.)

(Third, we should show our appreciation or gratitude to modern-day heroes like the frontliners – teachers, health workers, police and soldiers.)

Meanwhile, a left-wing group, the Akbayan Party, which is the political party of opposition Senator Risa Hontiveros, has called on fellow Filipinos to defend Philippine history just as national heroes bravely fought for the country’s freedom and independence.

The group reminded the public to become “heroes of history” and to defend the legacy of anti-martial law heroes against the “growing culture of pseudohistory” in the country.

(Be heroes of history. Let us defend the truth of our past. Let us not allow them to kill our heroes again who fought and were murdered by dictatorship. The freedoms and liberties we enjoy today are only possible because of our heroes’ bravery and selflessness. Let us not tarnish their legacy.)

Akbayan said Filipinos can be a “hero of history” by: fact-checking claims and articles online; developing the habit of counter-checking before spreading content online; promoting credible sources, links, and media; and, refraining from patronizing films and media that rely on conspiracy theories and unproven sources.

“While it is our duty as citizens to constantly revisit the past and improve our understanding of past realities, our perspectives must be based on truth, justice and accountability. Ang kasaysayang walang katotohanan ay tsismis lamang na kinakalat ng mga magnanakaw, mamatay-tao, sinungaling at gahaman,” Naguit said.

(While it is our duty as citizens to constantly revisit the past and improve our understanding of past realities, our perspectives must be based on truth, justice and accountability. History without truth is mere rumors that are spread by thieves, murderers, liars, and greedy people.)