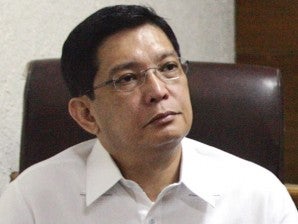 An official of the National Bureau of Investigation who survived an ambush last month and was included among the respondents in a petition brought by ex-NBI Director Magtanggol Gatdula for a writ of amparo said Wednesday that he needed the protection more than the petitioner.

“The court should have provided me with security and not the other way around,” NBI Deputy Director Reynaldo Esmeralda said, commenting on Tuesday’s grant of Gatdula’s petition by a Manila court to restrain the justice department and the NBI from prosecuting him.

“I almost died [in the ambush],” Esmeralda said. “I still have bullet fragments [in] my body [that] still have to be removed.”

Citing NBI and police findings, Esmeralda said at least 11 bullets hit the vehicle he was riding during the ambush in Paco, Manila, on February 21.

He said he could not have staged the ambush. “If I were to stage my own ambush just to frame [Gatdula], the gunmen would have strafed an empty vehicle, because bullets are hard to control, and I would not have allowed anyone to get hurt.”

His younger brother, Police Officer 3 Nilo Esmeralda, was hit in the shoulder and had to undergo surgery for the removal of bullet fragments in the eye after the ambush by two motorcycle-riding men.

Esmeralda gave the assurance, however, that the NBI will respect the court’s order and grant access to the vehicle. “We are not hiding anything,” he said. He stressed that he never implicated Gatdula in the ambush. “I only said that it may be related to the [Noriyo] Ohara case, but I did not point an accusing finger at him.”