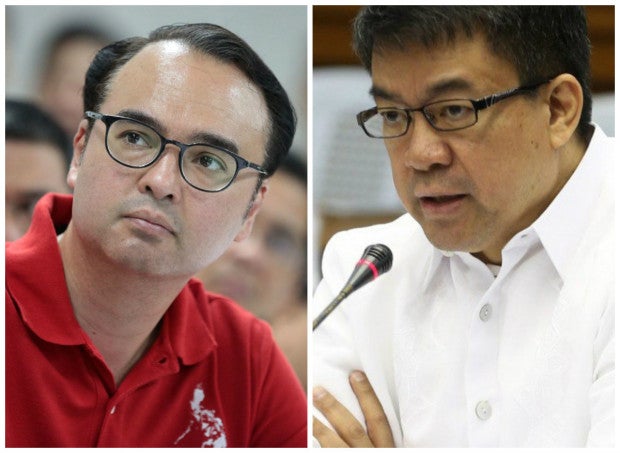 MANILA, Philippines — Senate Minority Leader Aquilino “Koko” Pimentel III on Friday attested that as far as the membership of the Commission on Appointments (CA) is concerned, Senator Alan Peter Cayetano belongs to the majority bloc.

Pimentel said this was based on the communication of the Senate to the CA, which he said he personally saw, where Cayetano was listed under the majority bloc, and Senator Risa Hontiveros was the only member of the minority in the commission.

(The Senate and the House communicate with the CA on which of its members are part of the CA. Then those members are divided into the minority and majority.)

(I saw the communication of the Senate, and Senator Risa Hontiveros has a factual basis for saying that she is the only member of the minority of the Senate in the CA.)

Pimentel said that Cayetano was listed under the majority bloc, which supports his point that the CA minority leader should be from the minority members.

Cayetano was elected as minority leader in the CA, which prompted Hontiveros to express “serious concern,” saying that the former was not part of the two-person Senate minority bloc.

In response, Cayetano asserted his right to be elected as he is part of the “independent minority” but not the bloc composed of Pimentel and Hontiveros.

He explained that he is automatically part of the Senate minority bloc since he did not vote for fellow legislator Juan Miguel Zubiri for the Senate Presidency.

Cayetano then claimed that the Senate minority bloc is prioritizing getting positions in the chamber over the welfare of the country.

(The problem is that they are putting position ahead of what is good for the country. That’s why I said to Senator Risa that we are not going to compete over the minority leadership position, but surely I can do a good job. It would be self-serving for her to say that she is better at the CA, and for me to say I’m better.)

“She wants to do a good job, so do I, but again itatanong ko sa kanya, Senator Risa, ano mas importante [what is more important]? We do a good job, and we fiscalize, we serve our people, [or] position? Kasi nag-give way na kami sa lahat position sa kanila [Because we gave way to them],” he added.

In response to this, Hontiveros on Friday said her concern was not about gaining a position but about “upholding principles and checks and balances where a true minority is essential in maintaining and strengthening democracy.”

“Is Sen Alan unable to be independent, or Majority, or minority, stick with it, and take the consequences? Or does he want it all?” she said in a statement.

“Of course, Sen. Alan can always say he cares about democracy, too, but his recent behavior in the CA leaves much to be desired,” Hontiveros added.

She, however, agreed with Cayetano that the minority bloc is “not an exclusive club” and there is always space for those who care for the country.

“Let’s leave feeble arguments about cults and colors to the wild, wild, west of troll armies and bots where they belong,” the opposition senator said.