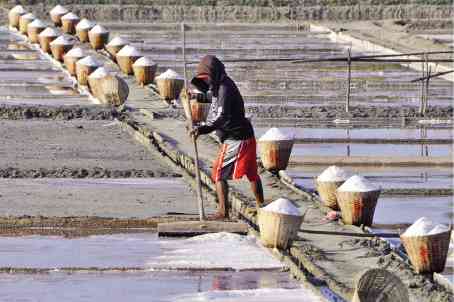 FILE PHOTO: Pangasinan derives its name from salt produced by farms in the western section of the province. Salt production has been generating livelihood for local farmers for 80 years. —WILLIE LOMIBAO

MANILA, Philippines — Salt supply in the country is still enough, an official of the Department of Trade and Industry (DTI) assured the public on Thursday, despite the increase in its cost.

Trade Undersecretary Ruth Castelo justified the hike in the Suggested Retail Price (SRP) of salt in the country.

(We have to understand that these manufacturers have not raised their prices for a long time.)

(So in our computations, it’s just right for the price to increase. But on the issue of supply, we have sufficient supply… The price increase of some locally-manufactured [salt] is because they already need to increase their price since over the years, it’s only now that they increased their prices. It’s not because of a shortage in salt.)

Aside from salt, the DTI also released on August 12 its updated SRPs for other goods such as canned sardines and meat, milk, soap, bottled water, and instant noodles, among others.

The Department of Agriculture is focusing its efforts on scaling up salt production to reduce the country’s dependence on imported salt.

Danilo Fausto, president of the Philippine Chamber of Agriculture and Food Inc., said the country is sourcing 93 percent of its salt needs from abroad.