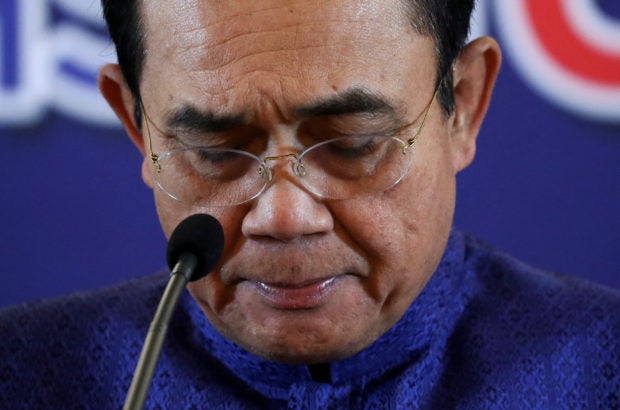 BANGKOK — For eight years, nothing seemed to shake the hold on power of Thai Prime Minister Prayuth Chan-ocha, who first came to office in a 2014 coup and has survived a hotly disputed election, mass street protests and four no-confidence votes.

Wednesday’s decision by Thailand’s Constitutional Court to suspend Prayuth, 68, from official duties was a rare setback, though it’s unclear whether the ouster will become permanent.

Shortly after the then-army chief seized power from an elected government in 2014 following months of destabilizing protests, Prayuth exhorted compatriots to heed traditional cultural values of harmony and respect for the royal family.

He even famously released a recording of a ballad he had written called “Returning Happiness to Thailand” shortly after the coup. It played on a loop on national radio, with lines such as “Today the nation is facing menacing danger/The flames are rising/Let us be the ones who step in/Before it is too late”.

The song – one of at least 10 he has released while leader – referred to political discord of more than a decade in Thailand.

For years, Bangkok’s streets were periodically paralysed by duelling mass protests by the “Red Shirt” supporters of successive populist elected governments – one ousted in a 2006 coup – and counterprotests by “Yellow Shirts”, royalist-military supporters who viewed the populists as corrupt and a threat to the constitutionally mandated reverence for Thailand’s king.

Prayuth’s seizure of power was Thailand’s 13th successful coup since the end of absolute monarchy in 1932 and followed six years of civilian-led governments. His supporters lauded him for restoring order and as a protector of the monarchy.

The army declared martial law and the junta embarked on a crackdown on dissent, sending hundreds of activists to camps for several days of “attitude adjustment” instruction.

During the early post-coup period, Prayuth’s temper occasionally flared. He once threatened to throw a podium during a press briefing and at another time mused he could “probably just execute” a roomful of reporters.

But the often-dour general, known by his nickname “Uncle Tu”, transformed himself into a political candidate for elections held in 2019.

His pro-army Palang Pracharat party won the second-largest number of seats in the House of Representatives behind the opposition populist Pheu Thai party, and he then managed to form a coalition government made up of more than a dozen parties.

Critics say the election rules gave an unfair advantage to pro-military parties – in part because an appointed Senate was involved in choosing the premier, an accusation he denied. Prayuth’s government said the elections were free and fair.

Prayuth campaigned on a platform of traditional Thai values, including devotion to King Maha Vajiralongkorn, who was crowned the same year as the elections after the death of his father, who reigned for 70 years, in late 2016.

Thailand’s constitution mandates that the king be revered as protector of the nation. Thai law punishes defaming the king or his family with up to 15 years in prison.

A year into Prayuth’s tenure as a civilian prime minister, a court decision to dissolve another high-profile opposition party, Future Forward, triggered mass protests by students.

Calls for Prayuth’s resignation soon evolved into demands for reform of the monarchy and even open criticism of King Vajiralongkorn.

In late 2020, the near daily demonstrations grew to tens of thousands, prompting warnings from Prayuth that the country would be “engulfed in flames”. Security forces used water cannon, tear gas and rubber bullets to break up the demonstrations, while protest leaders were arrested.

The demonstrations dwindled in 2021 and over 100 activists and protest leaders have been jailed or are facing trial under security laws and for defaming the monarchy.

Opposition parties in parliament, which proved reluctant to join the student protests, in the meantime sought to weaken Prayuth within the confines of politics and the legal system.

He has faced four no-confidence votes in parliament, the latest last month, but survived each of them with his coalition majority, even as it was whittled down by defections and dissent within his own party.

The opposition Pheu Thai’s latest tactic against Prayuth was a petition to the Constitutional Court arguing that he has already reached the constitutionally mandated eight-year term limit as he was first appointed as premier in 2014 by the junta.

That petition led to Wednesday’s suspension. But it will be weeks before the court rules on the substance of the petition, in which it could decide that Prayuth’s term began with the 2019 election.

If that happens, Prayuth could live to sing another day as Thailand’s leader, and would be eligible to stay in office until 2027, depending on the outcome of elections due by May 2023.