Face-to-face classes back, but can these reduce 91% learning poverty in PH? | Inquirer News

Face-to-face classes back, but can these reduce 91% learning poverty in PH? 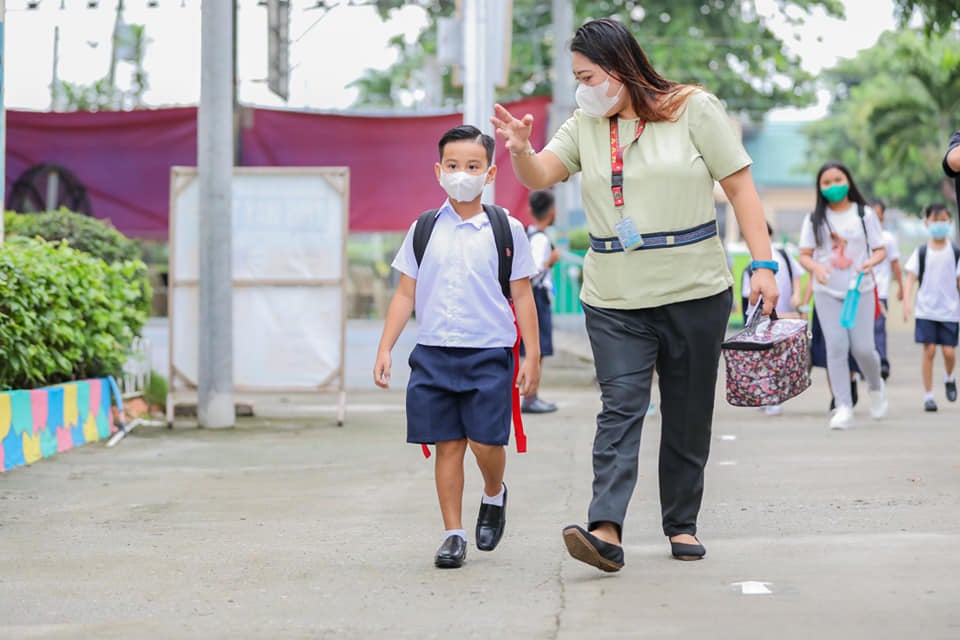 The return of face-to-face classes proceeded without hitches, according to the Department of Education. PHOTO FROM DEPED FACEBOOK PAGE

MANILA, Philippines—Last Monday (Aug. 22), millions of learners went back to school for the resumption of face-to-face classes, which the United Nations Children’s Fund (Unicef) said could help address “learning poverty”.

The Department of Education (DepEd) said on Tuesday (Aug. 23) that 28,797,660 learners have enrolled for the school year, with 24,175 schools implementing five-day face-to-face classes while 29,721 schools going on blended learning.

It was stressed by Vice President and Education Secretary Sara Duterte that the opening of classes, which was “courageously made despite the challenges and fears brought by the COVID-19 pandemic,” is a “victory for basic education.”

Unicef commended the DepEd, Early Childhood Care and Development Council and the Bangsamoro Region’s Ministry of Basic, Higher and Technical Education for taking decisive steps to open classrooms for learners this school year.

However, Oyunsaikhan Dendevnorov, Unicef representative to the Philippines, said that “as we welcome children back into the classrooms today, let us remember that this is the first of many steps in our learning recovery journey.”

He stressed that every day spent in the classroom is a chance, especially for the government to improve and chart the path to an “effective, equitable, and resilient education system.”

Unicef then called on education stakeholders to adopt the RAPID learning recovery framework, which prompts the government to accelerate efforts to:

The Philippine Business for Education (PBEd) likewise said that the resumption of face-to-face classes will give students a chance to cope, which it said could address the learning crisis that was worsened by the shift to distance learning.

Justine Raagas, acting executive director of PBEd, told ANC that “one of the biggest opportunities actually now is their return to classes” because before the COVID-19 crisis, learning poverty in the Philippines was only 69.5 percent.

“So the school closures, and the shift to purely modular learning, or lack of interaction in the classroom, or lack of supervision by teachers has actually exacerbated that,” she said.

Last month, World Bank (WB) said that learning poverty, which is the share of 10-year-olds who cannot read or understand a simple written text, hit a new high of 91 percent just last June, higher than the 90 percent last year.

The 91 percent rate, which means that nine out of 10 Filipino children (10-year-olds) are still struggling to read or understand a simple written text, is one of the highest in the East Asia and Pacific region.

This, even if the DepEd had said last year that “the issue of learning poverty has been a dilemma of the country for years and the department is proactively dealing with it for the long term.”

READ: DepEd on WB report that 90% of kids suffer from learning poverty: It is being resolved

Based on WB estimates, as many as 91 percent of Filipino 10-year-olds “are not proficient in reading.” Compared to other countries, the learning poverty rate in the Philippines was higher by 56.4 percentage points.

It was even higher than the average of 34.5 percent in the East Asia and Pacific region. The 91 percent was also worse compared to the rest of lower-middle income countries as it reflected a gap of 80.5 percentage points. 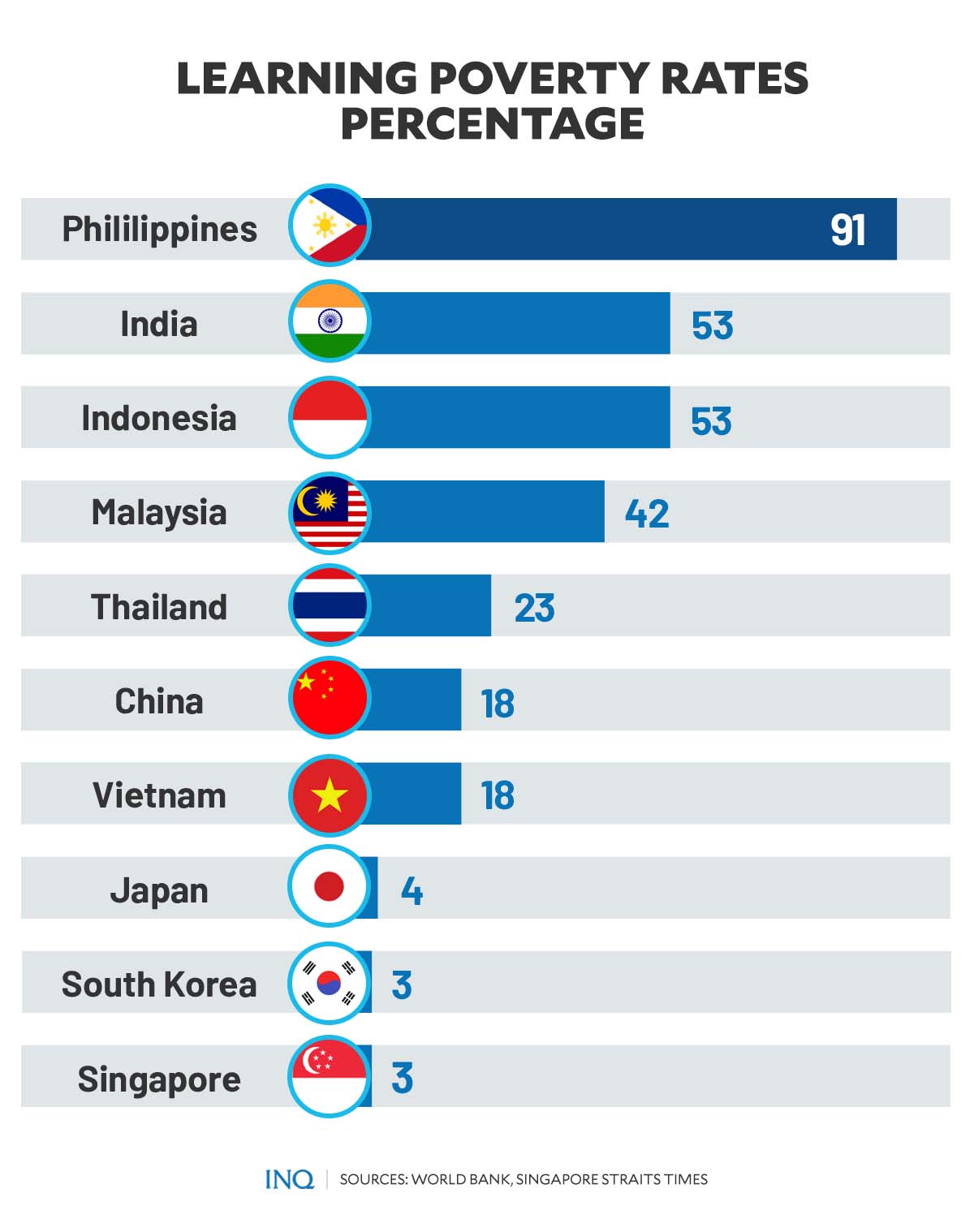 Last July 23, The Straits Times of Singapore published an article regarding the Washington-based lender’s report “The State of Global Learning Poverty: 2022 Update” and listed down learning poverty rates in Asia:

It was stressed in the WB report that “global learning poverty is at crisis levels and continues to worsen in the wake of the worst shock to education and learning in a century.”

The Straits Times’ list showed that in Asia, learning deprivation was also highest in the Philippines—90 percent. WB considers children who were not able to reach “minimum proficiency level” in reading tests to be “learning deprived.”

The problem, as stressed by WB, is compounded by the significant number of out-of-school youth as five percent primary school-aged children are not enrolled in school. 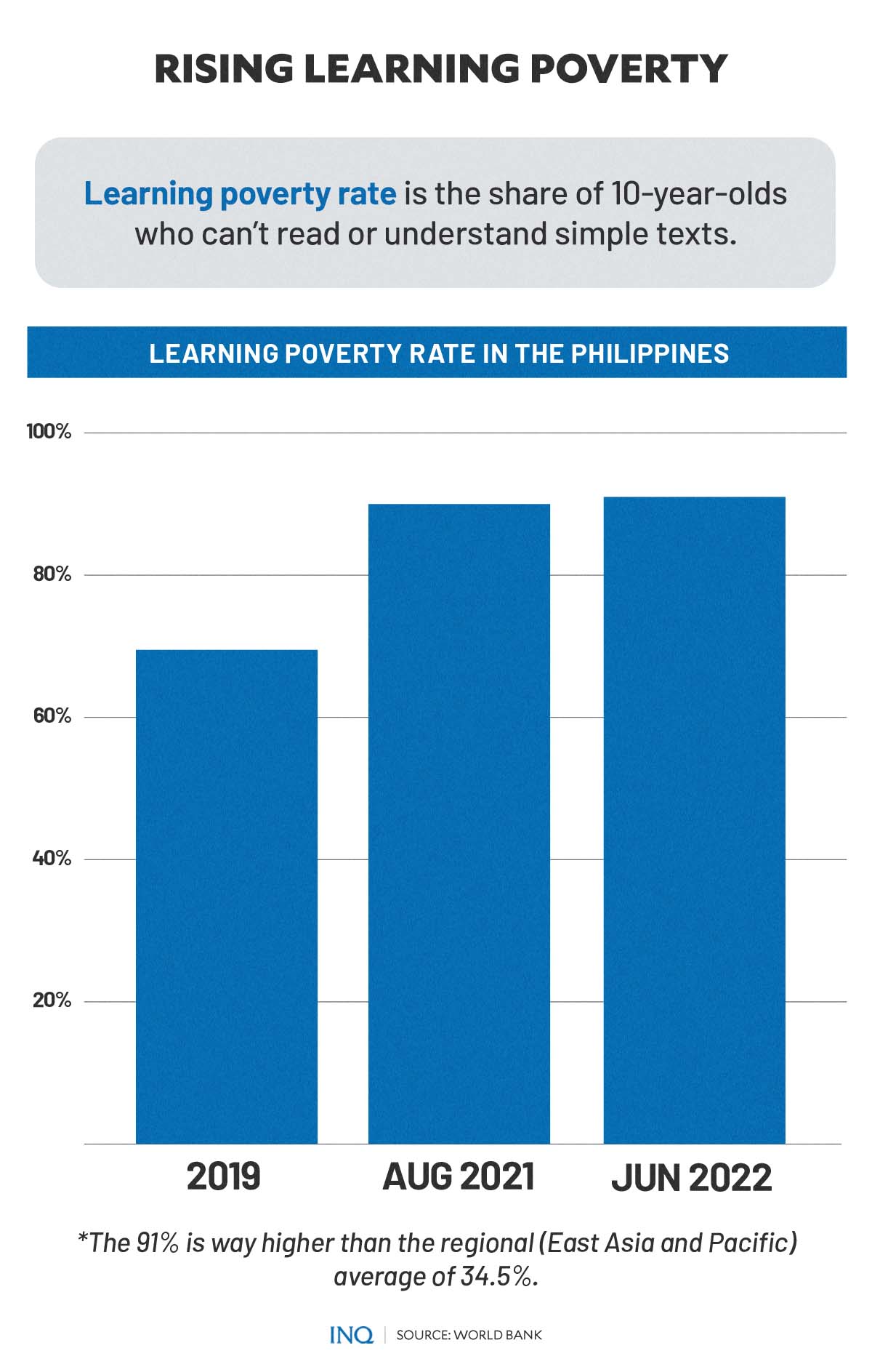 It also said that learning poverty is higher for boys than for girls in the Philippines because of these two reasons:

Learning poverty in the Philippines was only 69.5 percent in 2019, but because of the COVID-19 crisis, which forced educational institutions to shift to distance learning, the rate hit 90 percent in 2021 and 91 percent this year.

Last month, Duterte required all public and private schools to shift to five-day face-to-face classes starting Nov. 2. However, President Ferdinand Marcos Jr. stressed that “blended learning” would continue beyond Oct. 31 in specific areas to be identified by the DepEd.

WB had said that in March last year, remote learning in the Philippines covered only 20 percent of households with school children—the lowest rate alongside Ethiopia.

“Children’s engagement with remote learning is generally low where parents or caregivers lack any type of education and, in several countries, these children were three-to-four times less likely to engage in a learning activity compared to households where parents have tertiary education, as seen in the Philippines and Peru.”

The surveys conducted by WB last year showed that in the Philippines, only nine percent of school children with elder household members with no education participated in remote learning activities.

In contrast, 40 percent of school children with parents who had tertiary or college-level education engaged in remote learning. In households with parents who reached primary or secondary education, the participation rates were both 16 percent.

WB also saw how lack of access to the internet and even slow connection hindered distance learning, saying that only 26.9 percent of students have broadband internet access, although a bigger 88.8 percent have access to mobile technology.

Traced back to poverty

WB said that as a result of the worst shock to education, learning poverty has increased by a third in low- and middle-income nations, with an estimated 70 percent of 10-year-olds who cannot understand a simple written text.

As early as 2019, nine out of 10 children in low-income countries were already struggling with “learning poverty”. 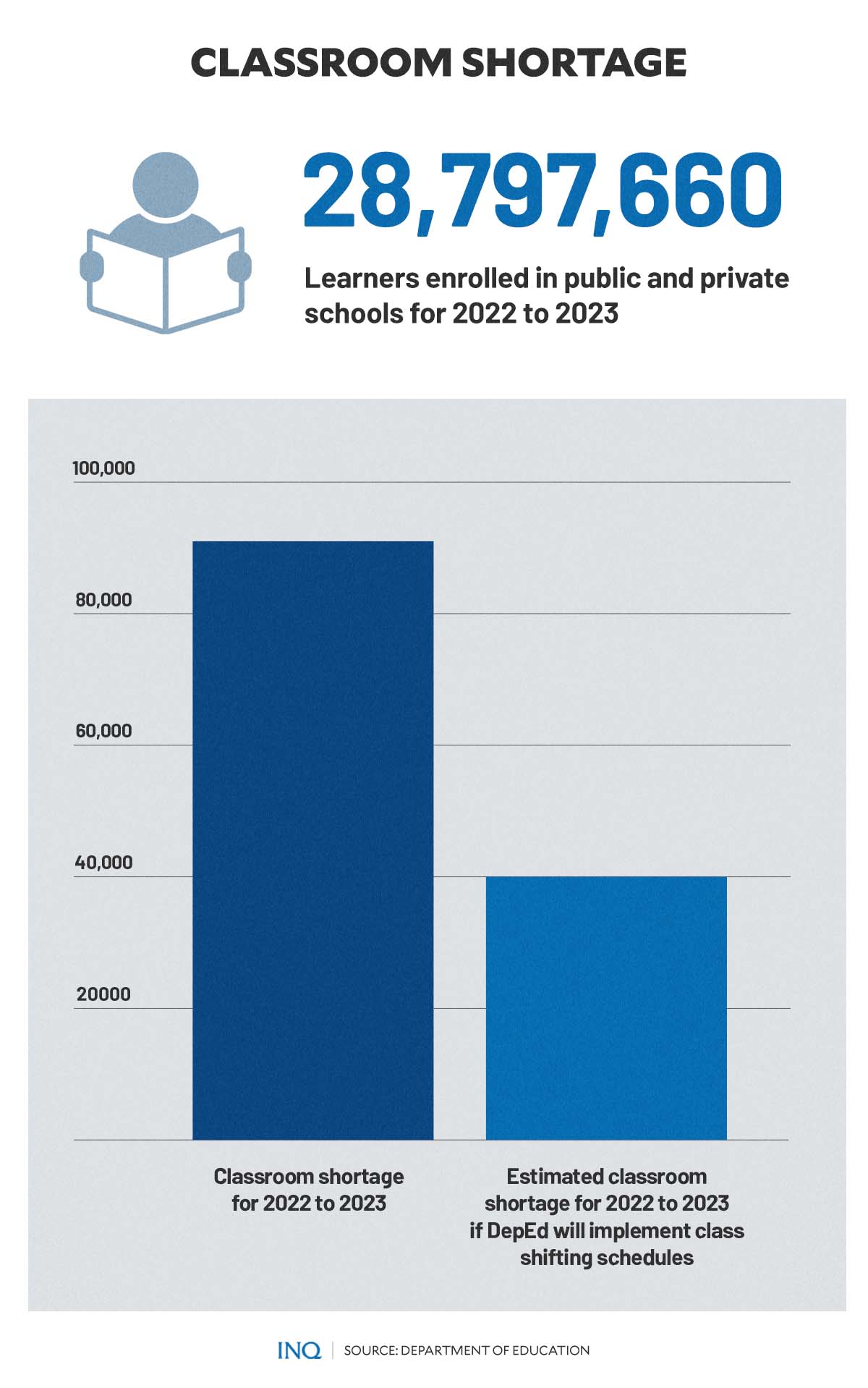 Based on data from Unicef, 2.85 million Filipino children were out of school in 2018, while some 31.4 percent of children in the Philippines belonged to poor families in 2015.

The Philippine Statistics Authority had said in 2017 that almost 10 percent of the estimated 39 million Filipinos aged six to 24 years old were out-of-school children and youth. 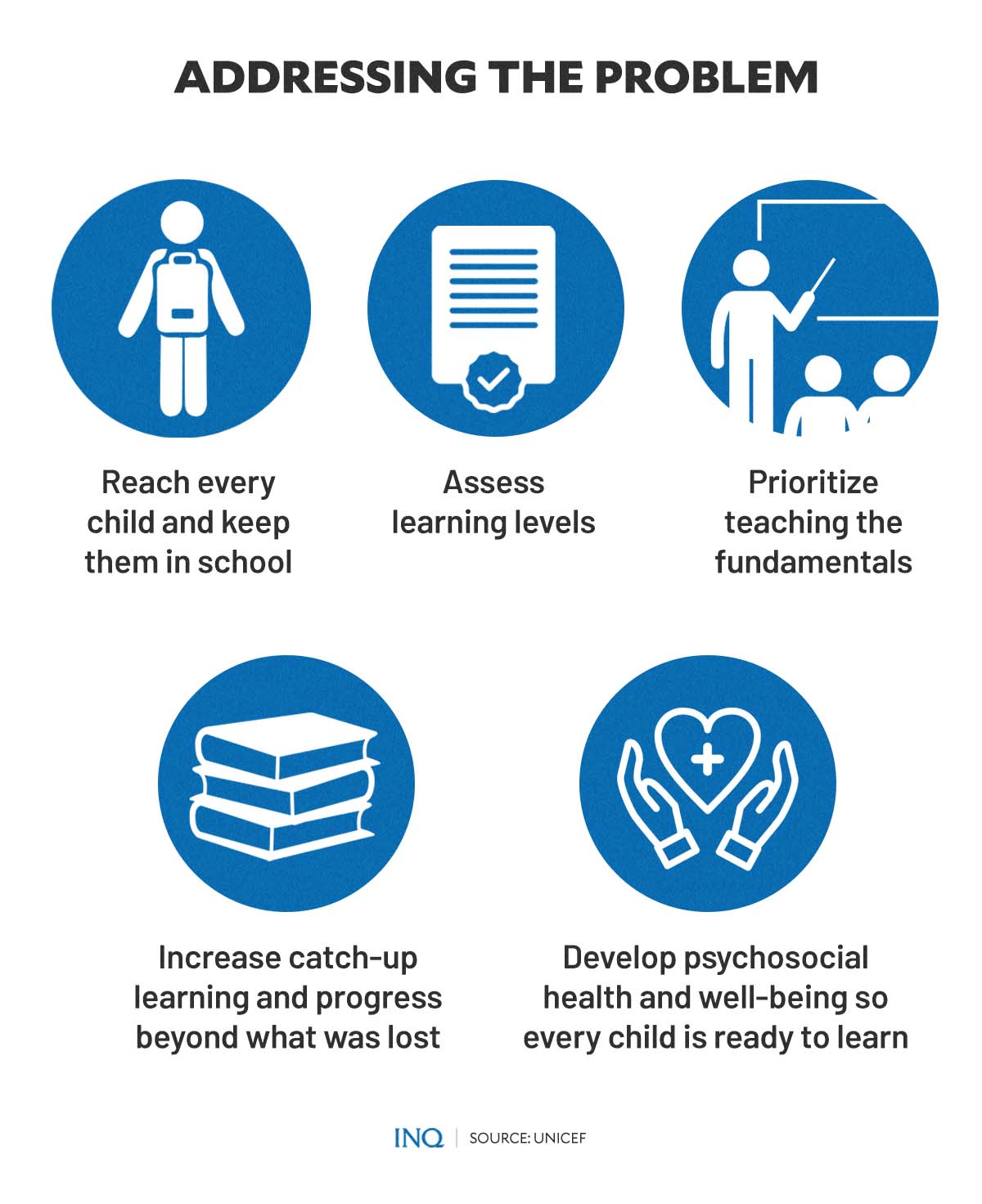 It explained that less than two percent of children aged 6 to 11 years were out of school, which is twice lower than the 3.5 percent of the total children aged 12 to 15 years who were not attending school.

Their most common reasons were marriage or family matters (42.3 percent), high cost of education or financial concerns (20.2 percent), and lack of personal interest (19.7 percent).

Nationwide, at least 53 percent of out-of-school children and youth belong to families whose income fall at the bottom 30 percent based on their per capita income.

Likewise, the PBEd stressed that “our learners have been going to school unprepared because they are hungry.”

“So there is that issue of malnutrition that stems very early on. Since 2001, one out of three five-year-olds in the country are stunted or too short for their age. Meaning, they go to school, they’re hungry. They have poor cognitive abilities. They can’t comprehend what’s being taught because they already have these poor conditions,” Raagas said.

Based on data from the United Nations Office for the Coordination of Humanitarian Affairs, 2.8 million Filipino children have experienced hunger last year, while one in three children (29 percent) younger than five years old suffered from stunting, or being small in size for their age, in 2019.

According to WB, “all children should be able to read by age 10.”

This, as “reading is a gateway for learning as the child progresses through school—and conversely, an inability to read constrains opportunities for further learning. Reading proficiency is also critical for foundational learning in other subjects.”

In its report, WB noted that the Philippines was spending less on public education than its regional and income-level counterparts.

Even before the pandemic, the Philippines’ underinvestment in education was reflected in its poor performance in global learning assessments, such as the Southeast Asia Primary Learning Metrics and Trends in International Mathematics and Science Study in 2019, and the Program for International Student Assessment in 2018.

For Raagas, “We do not have enough resources. So while we have learning losses and gaps, historically only three percent of our [gross domestic product] has been allotted to the education sector, while the prescribed amount globally should be six percent of the GDP.”

“With the P1.35 trillion budget allocation for debt servicing through automatic appropriations versus the P852.8 billion for education, the administration of President Marcos, Jr. cannot say that it allocated the biggest chunk of the 2023 proposed budget to education,” Castro said.

For instance, last Aug. 11, while the DepEd was already preparing for the resumption of face-to-face classes, it said  it lacks around 91,000 classrooms  for the school year 2022 to 2023.

To address the problem, the DepEd said that it will implement class shifting schedules and build temporary spaces, which was seen to reduce the shortage by 51,000.