DepEd: 46% of schools ready for in-person classes, 5 days a week 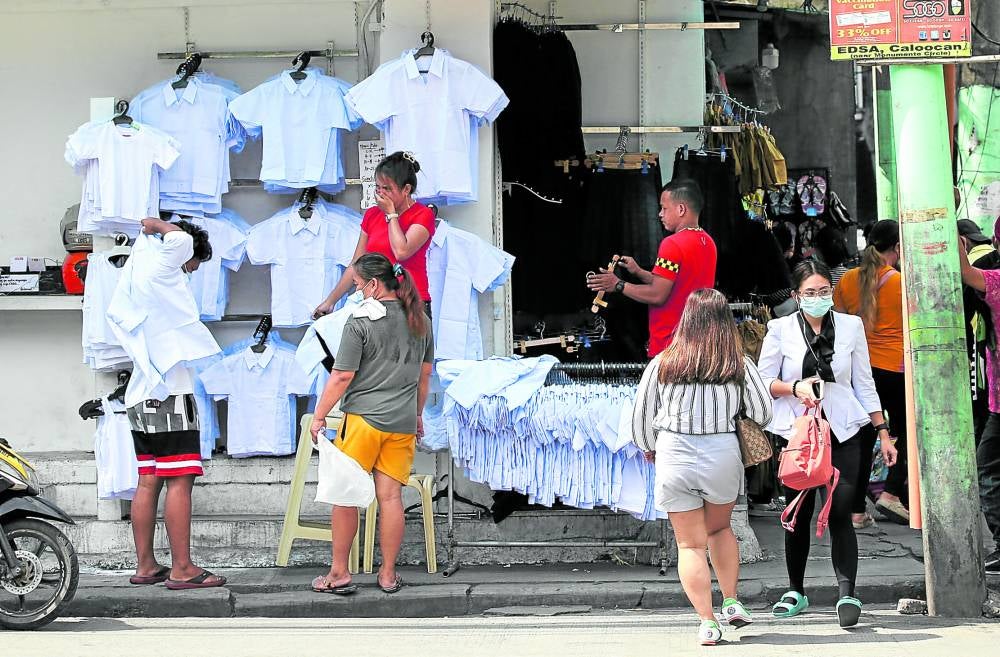 BACK-TO-SCHOOL BARGAINS Three days before the opening of school on Monday, August 22, 2022, a teenager tries on a white polo shirt being sold at Rizal Avenue in Caloocan City for as low as P99. Uniform short pants are also on sale at P129. Merchants like these hope to make up for two pandemic years of sagging sales due to the suspension of in-person classes. —LYN RILLON

Less than half of the country’s schools, both public and private, can fully conduct in-person classes when the new academic year begins next week.

The Department of Education (DepEd) and the Office of the Vice President (OVP) gave this updated assessment of the schools’ readiness on Friday, three days before the start of the new academic year on Monday, August 22.

According to Education Undersecretary Michael Poa, the DepEd spokesperson, at least 24,175 schools, accounting for 46 percent of the 54,900 campuses nationwide, can hold in-person classes throughout a five-day school week.

Meanwhile, 51.8 percent, or 29,721 schools, will still be adhering to the so-called blended modality, with in-person classes at least three days a week and the rest conducted online or using learning modules.

The remaining 1,004 schools, which Poa said accounted for only 1.29 percent, would still be limited to distance learning. Only last Monday, DepEd said 90 percent of the 47,000 public schools nationwide were expected to implement in-person classes by Monday, while private schools would continue blended learning untill Oct. 31.

But the Coordinating Council of Private Educational Associations of the Philippines (Cocopea) wants DepEd to allow these schools to continue blended learning beyond that date. Advocacy group Bantay Konsyumer, Kalsada, Kuryente supports that call. “We are aware that parents of these students have misgivings about a complete return to face-to-face mode, and that their reasons are perfectly valid and understandable,” said Patrick Climaco, the group’s secretary general.

Under DepEd’s Department Order No. 34, all public and private schools are directed to return to full in-person classes by November 2, more than two months after school opening. Only “highly exceptional cases” may continue either the online or blended learning setup.

READ: DepEd orders all schools to shift to face-to-face classes by November 2

But the department has not yet provided details on which schools may be exempted from the order, saying these would be determined during the transition period between August 22 and November 2. According to Poa, more than 27 million students had enrolled for the coming school year, which accounted for 96 percent of DepEd’s target of 28.6 million enrollees.

“In areas where there is a shortage of classrooms and chairs, that’s where we will implement strategies, such as shifting and blended learning to reduce the shortage,” Poa said.

But various groups question that assessment of the school year preparations.

“The fact that less than half of the schools are capable of implementing 100-percent face-to-face classes is proof that there are still a lot of gaps … and problems that have to be addressed,” Alliance of Concerned Teachers (ACT) chair Vladimir Quetua said in a statement.

“The least DepEd can do is to be honest about the situation and own up to the deficiencies,” he added.

Teachers’ Dignity Coalition (TDC) chair Benjo Basas said: “On the question of readiness for the opening of classes on Monday, our teachers are ready despite their reservations. But like in the past, it is the system that is not ready and it will be up to the teachers to fill in the gaps.”

“We are receiving consistent reports from the field, from our teachers. We really lack classrooms, chairs and learning materials. Not to mention the lack of personnel, teaching and nonteaching,” Basas added.

According to TDC, several classes had as many as 50 assigned students, which the group said would affect the implementation of physical distancing.

Moises Tamondong, principal of Manuel Luis Quezon Elementary School in Caloocan City, said the school would have to implement three shifts to accommodate all its enrollees.

He also said there were no available classrooms for kindergarten students, while some rooms had to be partitioned into two, in order to accommodate all Grade 1 classes.

“This is the situation in my school. That is why I am calling on anyone who can help us have enough learning spaces for our children,” Tamondong said.

“I hope that President Marcos and Vice President [and Education Secretary] Sara Duterte will be able to see our woeful situation and other schools facing struggles so these could be immediately addressed,” he added. I