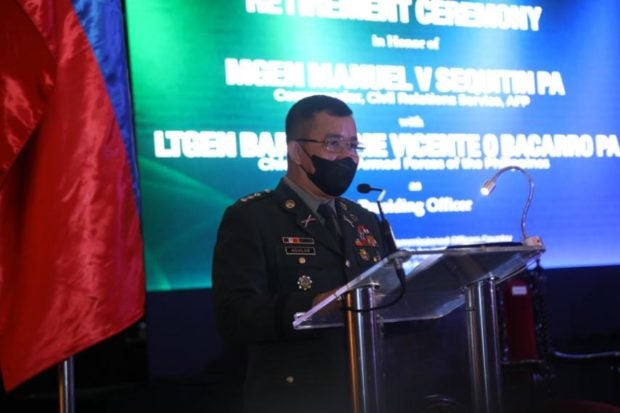 Acting Armed Forces of the Philippines (AFP) spokesperson Medel Aguilar is now also the acting head of the Civil Relations Service of the AFP. (Photo from AFP)

MANILA, Philippines — Acting Armed Forces of the Philippines spokesperson Col. Medel Aguilar is now also the acting head of the Civil Relations Service of the AFP or CRSAFP.

Major General Manuel Sequitin bowed out of service during a change of command and retirement ceremony at AFP General Headquarters in Camp Aguinaldo on Thursday, August 18, the AFP said in a statement on Friday.

Before assuming the post, Aguilar was the deputy commander of CRSAFP.

He is a member of the Philippine Military Academy “Tanglaw-diwa” class of 1992.

The military official acquired a Master’s Degree in Management from the Asian Institute of Management in 2011 and a Public Management Major in Development Security from the Development Academy of the Philippines in 2012.