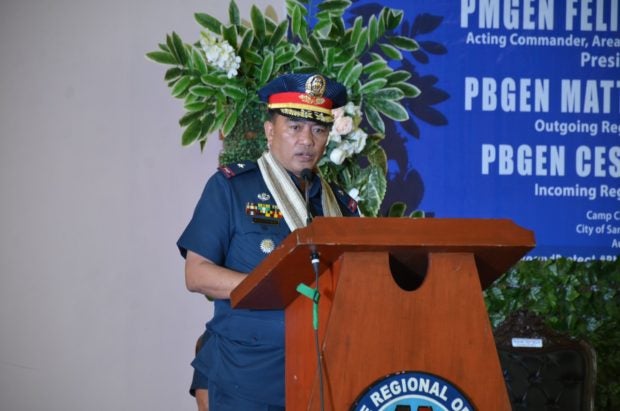 Brigadier General Cesar Pasiwen speaks to police officers in Camp Julian Olivas in the City of San Fernando, Pampanga, after his designation as the new regional director of the Central Luzon police. (Photo courtesy of Police Regional Office 3)

MABALACAT CITY, Pampanga—The new director of the Police Regional Office 3 (PRO3) has ordered all mobile forces personnel in Central Luzon to be deployed to patrol streets to maximize police visibility and deter crimes.

In a statement on Wednesday, August 17, Brigadier General Cesar Pasiwen directed the commanders of all mobile force units under the PRO3 to assign their men to the streets.

“Greater police visibility will help discourage criminals preying on defenseless victims, especially bikers who train early in the morning, particularly on weekends on-road routes and off-road trails frequented by cyclists, and commuters who go home from work in the wee hours of the night,” he said.

“We will also deploy our mobile forces in strategic locations to include major thoroughfares and even in gasoline stations and establishments inside expressways to prevent robberies and other possible atrocities,” Pasiwen added.

Pasiwen, a member of the Philippine National Police Academy Sandigan Class of 1994 and former executive officer of Area Police Command-North Luzon, has replaced Brigadier General Matthew Baccay, who was re-assigned to the Directorate for Personnel and Records Management in Camp Crame. INQ