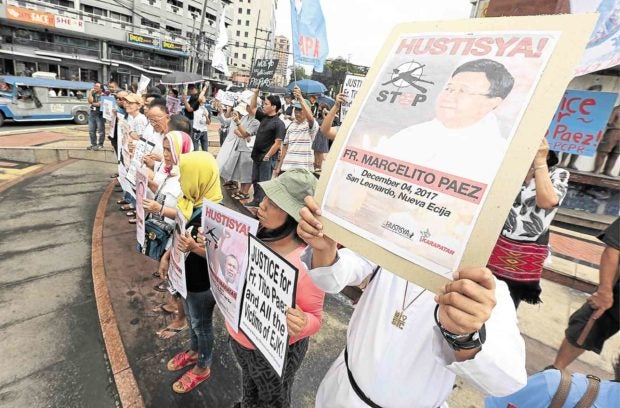 CALL FOR JUSTICE Members of the Rural Missionaries of the Philippines demand justice for Fr. Marcelito “Tito” Paez, who was gunned down by unidentified assailants on Monday in Jaen, Nueva Ecija, during a condemnation rally at Jamboree Rotunda on Tomas Morato Avenue in Quezon City in this photo taken in 2017. —GRIG C. MONTEGRANDE

The Department of Justice earlier indicted 16 individuals, including four RMP nuns, claiming that the group’s bank accounts showed that those involved “made funds available to the CPP-NPA.”

In a statement on Thursday, the RMP called the move a “part of [the] worsening state repression against human rights defenders.”

“Why is the government – especially from Duterte to Marcos II – hellbent on using all resources at its disposal to shut down the [RMP] for good?” the group asked.

Aside from condemning the criminal raps lodged against its members, RMP also “expressed serious concerns for the safety of those charged, noting that two are already jailed on other trumped-up charges.”

“The Marcos II government is using the same playbook by predecessor [Rodrigo] Duterte by demonizing legal democratic organizations such as RMP which provide much-needed services to the people and putting its members in direct harm’s way,” it added.

RMP reiterated that all its projects are “well-documented, reported and accounted for.”

It further pointed out that RMP’s mission work has been “seriously hampered because of the relentless state attacks.”

RMP also questioned the testimonies of one of the two supposed NPA surrenderees.

“In exchange for her mother’s release, she executed a spurious statement accusing RMP members of channeling funds to the CPP-NPA,” it explained.

Several groups, including the National Union of the People’s Lawyers, have similarly sounded the alarm over the accusations against the 16 indicted individuals.