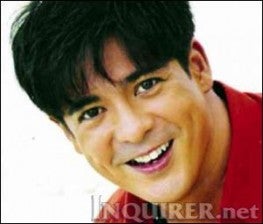 PILI, Camarines Sur—Movie star Aga Muhlach stirred local politics in the fourth district of Camarines Sur, the congressional district dominated by the Fuentebella political clan for over a century now, when he registered as a voter at the Commission on Election office in San Jose, Camarines Sur, on Monday.

Muhlach told the Inquirer Monday evening, at a dinner hosted by Governor Luis Raymund “LRay” Villafuerte, that he was registering as a voter in San Jose but avoided mentioning whether or not he was vying for an elective position.

The post-registration dinner for Muhlach, which was held at the CamSur Watersports Complex’s Villa Del Rey in this town, was attended by Villafuerte, Vice Gov. Fortunato Peña and political leaders in the fourth district towns.

Section 117, Article 22 of the Omnibus Election Code said that to be registered as a voter a Filipino citizen must have been a resident of the Philippines for one year and a resident in the city or municipality, where he intends to vote, for at least six months immediately preceding the election.

Muhlach said the roots of his father, who belonged to the Amador and Borja clans, were from the towns of Goa and San Jose.

He said he had been visiting San Jose since he was young to bond with his father’s kin.

Last month, Muhlach and Villafuerte stood as sponsors of 216 couples during a mass wedding in San Jose. On Monday, Muhlach again stood as godfather of 300 babies baptized in a Catholic Church in the town at around 1 p.m. before he proceeded to register as voter and resident of the town at around 3 p.m.

A source from Villafuerte’s staff, who declined to be named because he was not authorized to issue a statement about details of Muhlach’s political move, said it was the first time Muhlach registered as a voter, not having voted in past electoral exercises.

The source added that Muhlach was also building a house in San Jose to establish his residence.

The Fuentebellas marked their first century in politics in 2007, which was started on March 15, 1907, by patriarch Jose Fuentebella, one of the founding members and an executive committee member of the Nacionalista Party with then President Manuel L. Quezon and Vice President Sergio Osmeña Sr.

The Deputy Speaker’s wife, Evelyn, is the mayor of Sañgay town, his son Arnie is mayor of Tigaon while a nephew, Emmanuel F. Llaguno, is a member of the provincial board, all key elective positions in the fourth district.

Chavez said the “star power of Muhlach” was undeniable as the latter was a natural crowd drawer whenever he tagged along during the barangay visits of Villafuerte in the fourth district.

He said it would only take the right approach to translate Muhlach’s star power into votes should the actor decide to run in an elective position.