Microplastics: The nearly invisible poison in our oceans | Inquirer News

Microplastics: The nearly invisible poison in our oceans 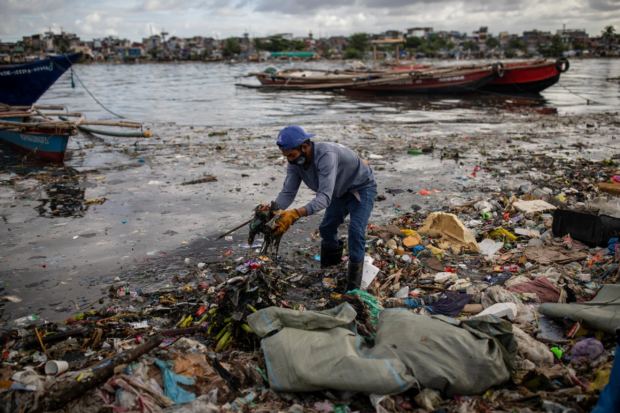 MANILA, Philippines—In an effort to dive deep into and study the tiniest details of plastic wastes that contaminate the world’s oceans, some scientists are now focusing on something that is invisible to the human eye—microplastic.

Plastic wastes that reach bodies of water and eventually the oceans come in all sizes—large, highly visible and easily removable items to small, microscopic particles known as microplastics.

While indiscriminate disposal and mismanagement are often seen as the main sources of plastic wastes that end up in the oceans, behind the headlines, scientists have identified another major source of concern in microplastics.

According to the International Union for Conservation of Nature (IUCN), there are two types of microplastics polluting the world’s waters: primary and secondary.

Primary microplastics, IUCN said, are those that are directly released into the environment as small particles—less than 5 millimeters in size. These are mostly products of “the degradation of large plastic waste into smaller plastic fragments once exposed to the marine environment.”

A report by IUCN, “Global Evaluation of Sources,” sought to stress the contribution of microplastics to plastic pollution of oceans on a global scale. The report has been described as “one of the first studies to quantify primary microplastics leakage” and seeks to “demonstrated that these primary microplastics are globally responsible for a major source of plastics in the oceans.”

Figures from the report showed that between 15 and 31 percent of all plastic in the oceans likely originated from primary sources of microplastics.

Primary microplastics, the IUCN explained, can be a voluntary addition to products—scrubbing agents in personal care products such as shower gels, creams, and others. They can also come from the abrasion of large plastic objects during manufacturing or maintenance.

“This is a significant but as-of-yet unrecognized proportion. In some countries benefitting from advanced waste treatment facilities, primary microplastics releases even outweigh that of secondary microplastics,” IUCN said. 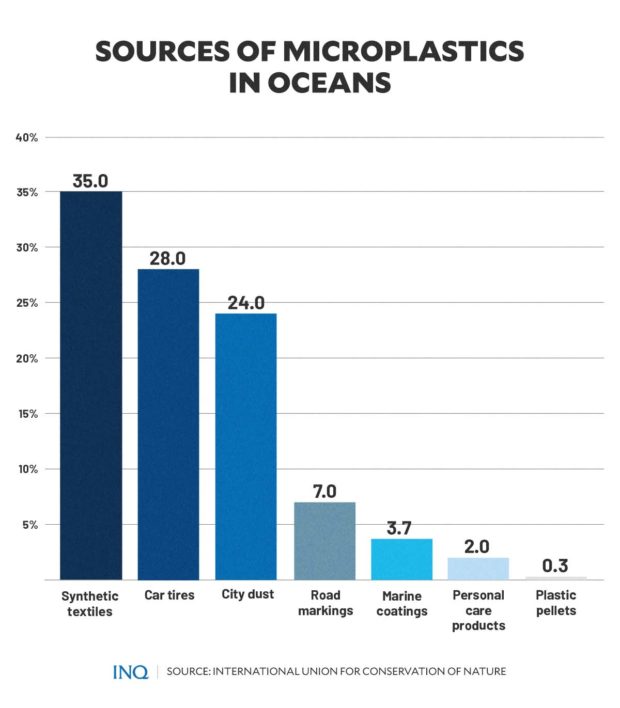 It was estimated that around 1.5 million tons of primary microplastics are released into the oceans globally each year. Most of these—around 98 percent—were from land-based activities, while two percent were generated from activities at sea.

On a global scale, the primary microplastics released to the world’s oceans each year come from seven sources, including:

Car tires: Two separate studies by Norwegian and Swedish researchers have previously found that a large fraction of particles found in the sea seemed to originate from car tires.

“[Tires] get eroded when used. The particles are formed from the outer parts of the tyre and consist of a matrix of synthetic polymers, namely Styrene Butadiene Rubber (approximately 60%), in a mix with natural rubber and many other additives,” IUCN wrote, citing another study.

Tire dust will then either be spread by the wind or washed off the road by rain. However, there is no reliable information yet on how microplastics from tires are transferred to the world’s oceans.

City dust: According to IUCN, city dust refers to nine sources identified in its country assessments. These include plastic from “the abrasion of objects (synthetic soles of footwear, synthetic cooking utensils), the abrasion of infrastructure (household dust, city dust, artificial turfs, harbors and marina, building coating) as well as from the blasting of abrasives and intentional pouring (detergents).”

Road markings: Road markings—such as paint, thermoplastic, preformed polymer tape, and epoxy—are applied during the development of road infrastructure and its maintenance.

“Primary microplastics are released from commercial and leisure boats during building, maintenance, repair, or use. The key activities that may lead to releases are surface pre-treatment, coating application, and equipment cleaning,” IUCN said in the report, citing a separate study.

Personal care products: Plastic microbeads, according to IUCN, are often used as ingredients in many personal care and cosmetic products. One study showed that some of these products contain as much plastic ingredients as the plastic they are packaged in.

“Classical use of personal care products results in the direct introduction of the plastic particles into wastewater streams from households, hotels, hospitals, and sport facilities, including beaches. Microbeads from cosmetics have been observed in field studies in different areas of the world,” IUCN noted.

Plastic pellets: “In their primary form, many plastics are in the form of pellets—typically 2-5 mm in diameter—or powders. Pellets are transported to plastic transformers that generate the plastic products.”

However, during manufacturing, processing, transport, and recycling, these pellets can be spilled into the environment as a result of small or large incidents along the whole plastic value chain. 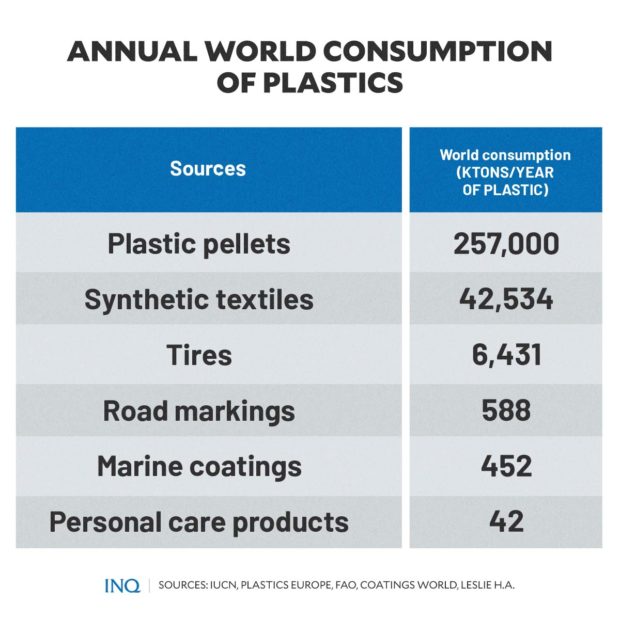 Every year, people across the globe consume:

Based on figures from The World Economic Forum, 16 to 35 percent of microplastics released into oceans are from synthetic textiles. Between 200,000 and 500,000 tons of microplastics from textiles enter the global marine environment each year.

Almost 20 percent of the total wastewater worldwide comes from fabric dyeing and treatment.

Many of those microplastics found in the world’s oceans were polyester fibers—which do not break down in the ocean.

A previously published study by the University of Plymouth also found that over 700,000 microscopic fibers could be released into wastewater after each use of a washing machine, which eventually passes through sewage treatment and into the environment.

The study observed a series of polyester, acrylic, and polyester-cotton items that were washed at 30˚C and 40˚C using various combinations of detergent and fabric conditioner.

“Fibers were then extracted from the waste effluent and examined using an electron microscope to determine the typical size and any differences in mass and abundance among treatments,” the study explained. 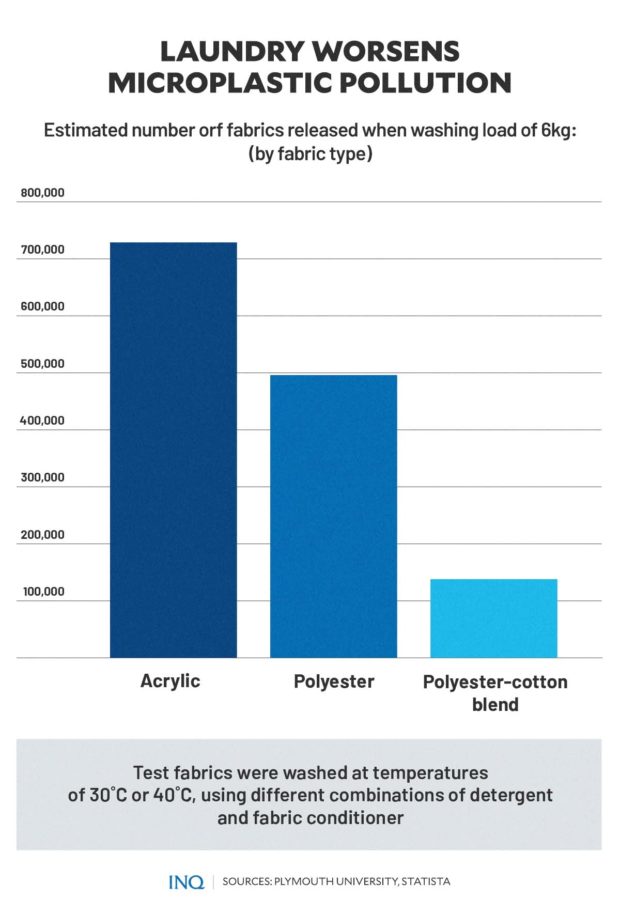 Results found that cleaning an average washing load of 6 kilograms using a domestic washing machine could release between 137,951 to 728,789 fibers per wash, including an estimated:

“As fibers have been reported in effluent from sewage treatment plants, our data indicates fibers released by washing of clothing could be an important source of microplastics to aquatic habitats,” wrote researchers Imogen Napper and Richard Thompson.

“[This study] could help establish whether specific wash conditions could be used to help minimise fiber release,” they added.

While reducing mismanaged plastic waste on a global scale remains a priority, IUCN said that for many regions and sectors, solutions need to be found to reduce primary microplastics.

“Reducing mismanaged plastic waste mainly requires implementing adequate infrastructure and waste management practices as well as educating behaviours of consumers. Technologies are readily available and the challenge is more a political and financial one,” said the IUCN.

“Solving the primary microplastic release into the world’s oceans requires a very different set of solutions,” it added.

World Bank, meanwhile, has previously suggested that consumers can help bring solutions by becoming more aware of what they buy. They advised consumers to take these small steps to help: