UPDATED MANILA, Philippines — Senator Raffy Tulfo on Tuesday proposed that “ukay-ukay” or imported second-hand garments should be legalized instead of banned so that government could derive income from such imports.

Tulfo made the proposal as he noted the failure of the Bureau of Customs to control the influx of ukay-ukay imports, which are now being sold in many parts of the country, and even online.

Under Republic Act (RA) No. 4653, the commercial importation of used clothing and rags is prohibited to ensure public health and the nation’s dignity, thus, most of those that have reached the country were likely smuggled in and untaxed.

“Siguro, since hindi po kayang control-in ng Bureau of Customs ‘yung pagpasok ng ukay-ukay, siguro we have to come up with a system na, I don’t know, legalize ukay-ukay,” Tulfo said during the Senate committee on ways and means hearing.

(Since the Bureau of Customs cannot control the entry of ukay-ukay, maybe we have to come up with a system that legalizes ukay-ukay.)

(If you cannot prevent it, maybe talk to lawmakers to amend our law, the policy to make ukay-ukay import legal to pay taxes.) 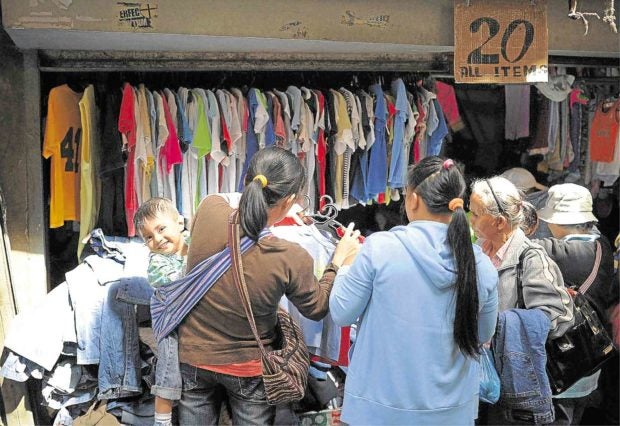 FILE PHOTO A group of mothers sifts through a pile of preowned clothes, sold at P20 each, in a “wag-wagan” or “ukay-ukay” shop in Baguio City. —EV ESPIRITU

Senator Sherwin Gatchalian, Senate panel on ways and means chair, meanwhile, advised the BOC to work with local government units to bring awareness that ukay-ukay is restricted under Philippine law.

“It’s about time to revisit this law. Like I said, we cannot fault the retailers for selling ukay-ukay because I don’t think they know it’s illegal,” said Gatchalian.

BOC Deputy Commissioner Edward James Buco assured the senators that the agency will strengthen its efforts to address the issue.

“We will intensify more our efforts against that scheme,” he said.