Vasculitis nearly turned Ashton Kutcher blind, paralyzed. What is it? 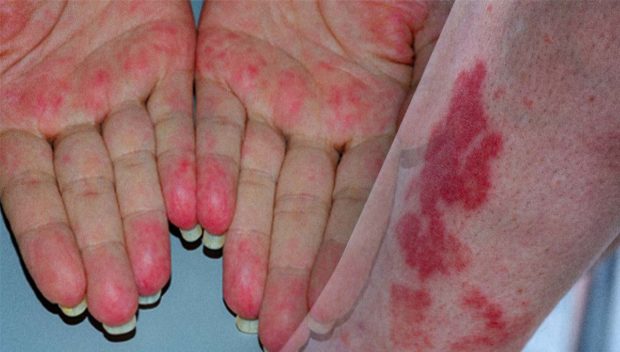 MANILA, Philippines—“You don’t really appreciate it until it’s gone.” Hollywood actor Ashton Kutcher recently said this as he revealed his year-long battle with vasculitis—a condition that almost took his vision, hearing, and mobility.

Kutcher, known for his role in the American TV series “That ‘70s Show” and is now a venture capitalist, has shared his “terrifying journey” about being diagnosed and living with this rare inflammatory disease. 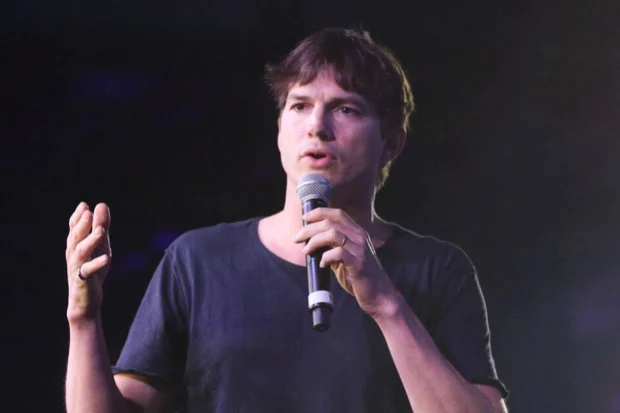 This revelation has brought awareness about vasculitis, a little-known autoimmune disease that can affect different parts of the body and lead to complications such as organ damage, blood clots, blindness, and infections.

Understanding vasculitis and its symptoms

Vasculitis, according to the US National Institutes of Health (NIH), refers to a group of rare medical conditions that occur when inflammation affects the blood vessels in the body.

Inflammation is the immune system’s natural response to an injury or infection. It can lead to swelling, which can help protect the body against invading germs. 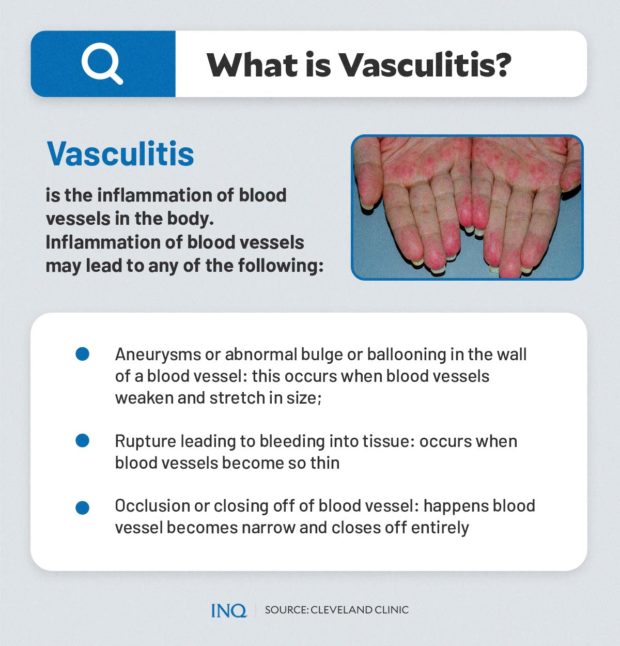 However, in vasculitis, the immune system attacks the healthy blood vessels, making them swollen or narrow.

According to the Cleveland Clinic, inflammation of the blood vessels may lead to any of the following:

Medical experts have yet to determine the exact cause of vasculitis.

In some cases, the type of vasculitis is influenced by the person’s genetic makeup. Others are due to the immune system attacking blood vessels by mistake.

However, Mayo Clinic said there are common triggers for this immune system reaction, including:

The symptoms of vasculitis also vary depending on the type of vasculitis a patient has, the organs affected, and whether the condition is serious. Some patients also exhibit or experience only a few symptoms, while some become very sick.

“Sometimes the symptoms develop slowly, over months. The symptoms may also develop very quickly, over days or weeks,” the US NIH explained.

Among the general symptoms of vasculitis are:

Meanwhile, the following signs and symptoms are  related to specific parts of the body affected:

There are several types of vasculitis. Some are common, while others are considered rare. Studies also showed that different symptoms appear depending on the type of vasculitis. 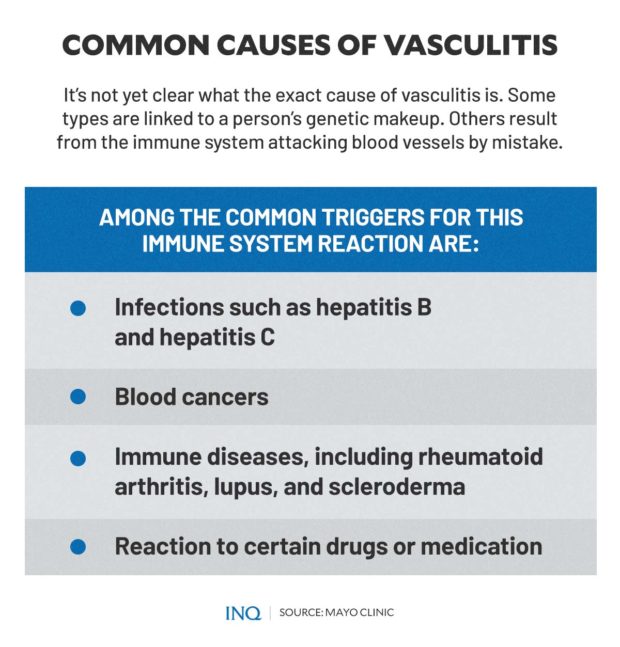 Although vasculitis can happen at any age, there are types that are more common among people of certain ages. These are:

These types of vasculitis may run in families:

Lifestyle habits, such as smoking and using illegal drugs, were also found to increase the risk of vasculitis.

People with existing medical conditions, like autoimmune disorders, hepatitis B or C, and lymphoma are more likely to be diagnosed with vasculitis.

In June, the “Queen of All Media” Kris Aquino revealed that she was diagnosed with late stage 3 of an extremely rare form of vasculitis: the Churg Strauss Syndrome, also known as Eosinophilic granulomatosis with polyangiitis (EGPA). 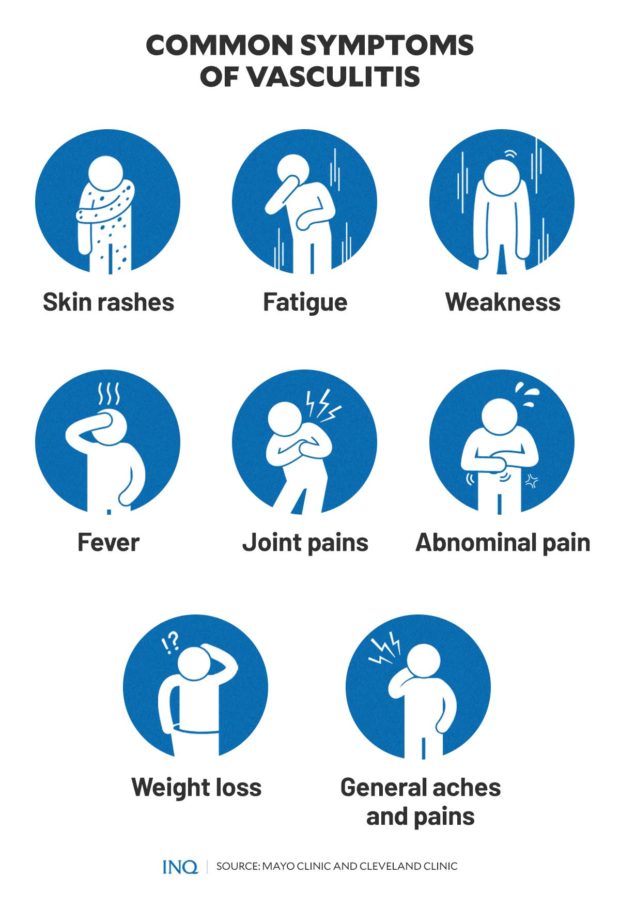 According to Aquino’s Houston-based doctor Dr. Niño Gavino, the life expectancy for EGPA without medical intervention is 25 percent, while a five-year survival rate is 62 percent. Only one in one million people are diagnosed with this disease per year.

Treatment for vasculitis focuses on controlling the inflammation and the underlying conditions that could be triggering the disease.

“The goal of treatment is usually to reduce inflammation,” according to NIH, adding that “people who have mild vasculitis may find relief with over-the-counter pain medicines. For severe vasculitis, you may receive prescription medicine.”

“With treatment, vasculitis can go into remission, which is a period of time when you don’t have symptoms.” 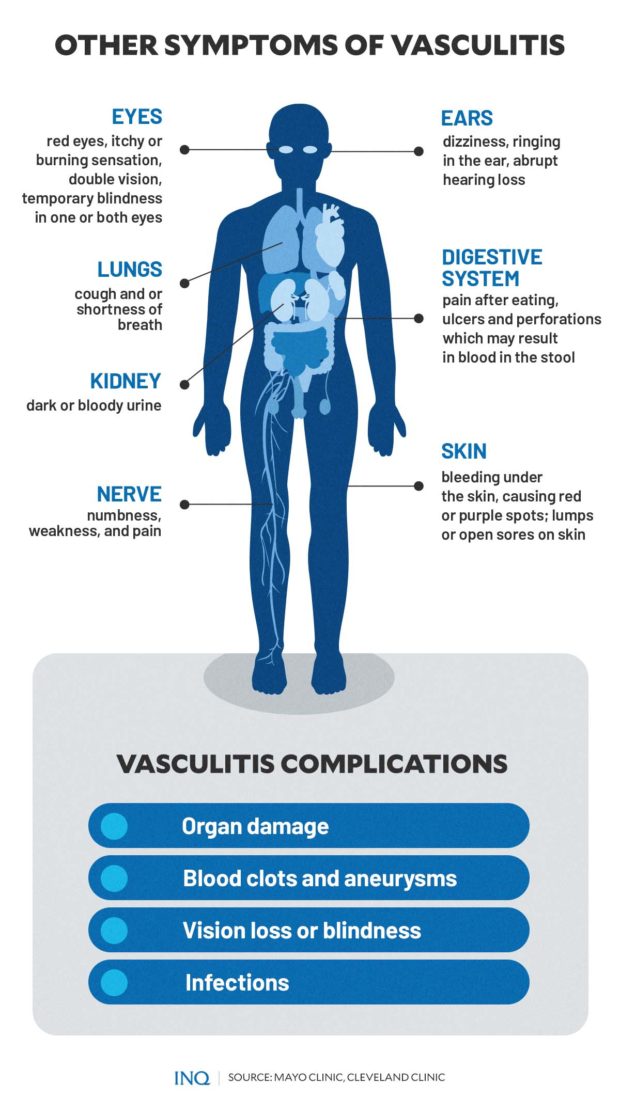 Steroids, such as corticosteroids, are among the common medication given in severe cases. This can help reduce swelling in blood vessels.

In some cases, an attending physician might require procedures or surgery.

In terms of prevention, the NIH noted that some types of vasculitis could not be prevented—primarily if caused by autoimmune disorders.

For some types of vasculitis, medicines may help reduce symptoms. These include:

In 2020 health experts in New York City and the United Kingdom warned about the possible link between Kawasaki disease, one of the types of vasculitis, and COVID-19 among children ages 2 to 15.

This was after 15 children hospitalized for COVID-19 experienced persistent fever and inflammatory markers similar to Kawasaki disease symptoms. Over half had a rash and experienced abdominal pain, vomiting, or diarrhea. Some had respiratory symptoms.

“We have long suspected that there may be different triggers for KD (Kawasaki disease) based on individual genetics. The emergence of this new problem suggests that the new coronavirus, SARS-CoV-2, may be a trigger for some children to develop KD,” said Jane Burns, director of the Kawasaki Disease Research Center at the University of California at San Diego, in a letter addressed to families of children who have previously had Kawasaki disease.

In the same year, UK’s national health authority issued an alert to warn of an “apparent rise in the number of children of all ages presenting with a multi-system inflammatory state requiring intensive care across London and also in other regions,” which they said could be related to COVID-19. 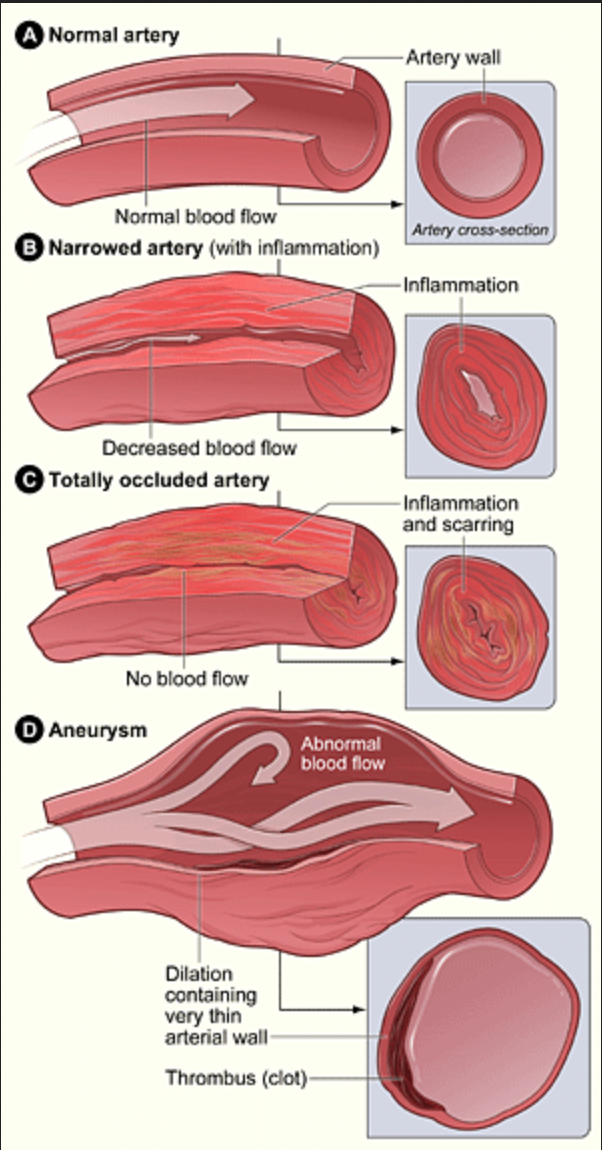 EFFECTS OF AN INFLAMMATION ON AN ARTERY. GRAPHIC: US NIH

The US Centers for Disease Control and Prevention (CDC) and some medical experts, however, cautioned against drawing connections between KD and COVID-19.