‘No one can stop them’: African migrants aim for Spain’s Canary Islands | Inquirer News

‘No one can stop them’: African migrants aim for Spain’s Canary Islands 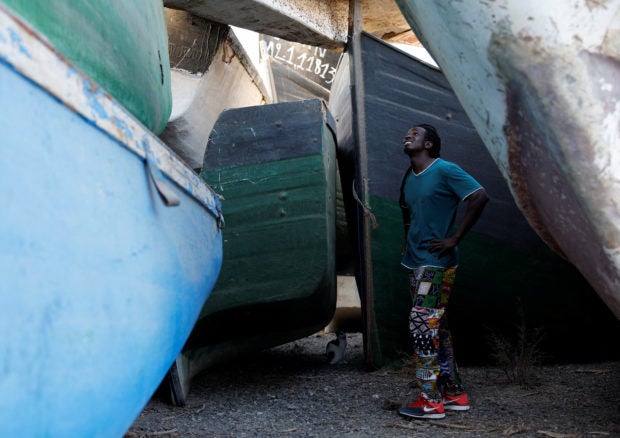 Mohamed Fane migrant from Senegal who arrived in wooden boat to the Spanish island of Gran Canaria looks at a boat at a cemetery of abandoned wooden boats in Arinaga. Spain, August 4, 2022. REUTERS

GRAN CANARIA — Standing in a cemetery of abandoned boats, Mohamed Fane picks a West African franc off the floor and shudders at the traumatic memory of his voyage from Senegal to the Canary Islands.

After an arduous overland trip and months waiting, smugglers shepherded the 33-year-old carpenter into a flimsy wooden vessel with two dozen others to sail from the Moroccan town of Dakhla – but it ran out of fuel far from the Spanish archipelago.

One famished and thirsty man died on board, while a Spanish rescue boat saved the rest. Fane, who barely ate in three days at sea and used his water bottle to bail out the leaking boat, wept like never before when he reached Gran Canaria.

“It is the hardest thing that ever happened to me, I would never repeat it,” he said.

Such horrendous experiences are commonplace on one of the busiest and most perilous routes into Europe for Africans fleeing poverty, conflict and hunger accentuated by the COVID-19 pandemic and the knock-on effect of the Ukraine war.

Two thirds of African migrants entering Spain now go via the Canaries, according to government data. Some 9,589 have made it there so far in 2022 – a 27% rise on the same period last year. 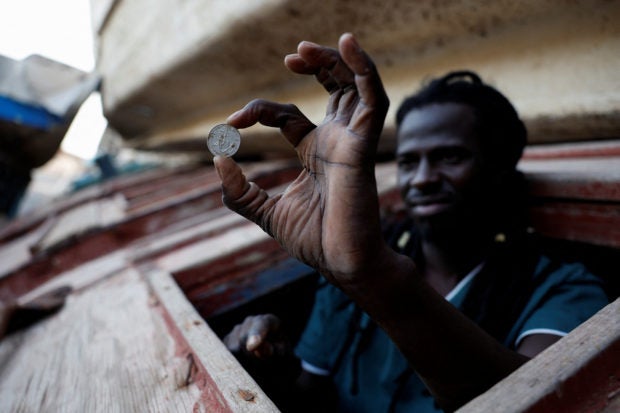 Mohamed Fane, migrant from Senegal who arrived in wooden boat to the Spanish island of Gran Canaria, shows a coin at a cemetery of abandoned wooden boats in Arinaga, Spain, August 4, 2022. REUTERS

On a map, the seven islands are just pinpricks in the vast Atlantic off West Africa. Fishermen guide the precarious boats with often inadequate motors. Many get lost or sink.

At least 1,000 people have died in those waters so far this year, according to the Walking Borders charity, with the tens of thousands of European tourists flocking to the Canaries largely unaware of the tragedies unfolding so near their holidays.

“There is panic among people in Africa after the pandemic, the war in Ukraine and the inflation, because they are very dependent on food from outside,” said Sukeina Ndiaye, a leader of a migrant support network on Tenerife island.

“I fear many more are going to take the risk.”

Another who did just that is fisherman Elhadji Diouf: he took a boat with 67 others from south Senegal that wound up on a Tenerife beach six days later. He said he was honouring his father’s wish for the family to escape poverty caused by their ever-scarcer catch due to industrial-scale fishing.

Sometimes, he said, migrants lose their mind after exhausting journeys from inland Africa then blazing hot days on the open sea. “Some people can’t stand it and jump into the sea. The boat cannot turn, or stop, to avoid capsizing, so it is impossible to rescue them.”

Yet with the short route across the Strait of Gibraltar and other ways into southern Europe across the Mediterranean better policed, the Canary Islands are an increasingly popular choice for desperate migrants despite the dangers. 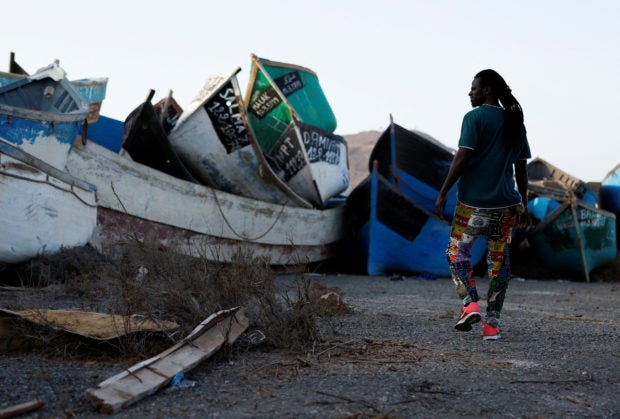 Mohamed Fane migrant from Senegal who arrived in wooden boat to the Spanish island of Gran Canaria walks in a cemetery of abandoned wooden boats in Arinaga. Spain, August 4, 2022. REUTERS

Morocco has stemmed its flow in a deal with Spain, but many still come from Mali, Senegal, Guinea-Bissau, Guinea, Ivory Coast, Burkina Faso and Nigeria, activists say.

In a report this week on the burgeoning Canary Islands migration route, the United Nations said 150 boat drivers were arrested last year but the crime gangs behind them on the African coast were rarely targeted.

Many deaths go unnoticed, it added, noting how boats often take circuitous route to avoid search-and-rescue zones and mobile phone networks, but can then get caught in strong currents taking them out towards the Caribbean.

Numbers may pick up with calmer waters from September.

“I lose hope in my continent, Africa. What is happening forces you to go (…) I heard some people say that arriving here nearly dead is better than staying in Africa.”

On the same day, Spanish rescue services were hunting a boat lost at sea off Mauritania with 100 people reported on board. Days later, another boat was rescued with 61 people near the island: a 19-year-old boy was found dead on board.

Dozens of migrants rescued, four dead after boat runs aground on Spain’s Lanzarote

Desperate Algerians ready to die at sea to reach Spain

Moroccan teens ready to give up everything to reach Europe