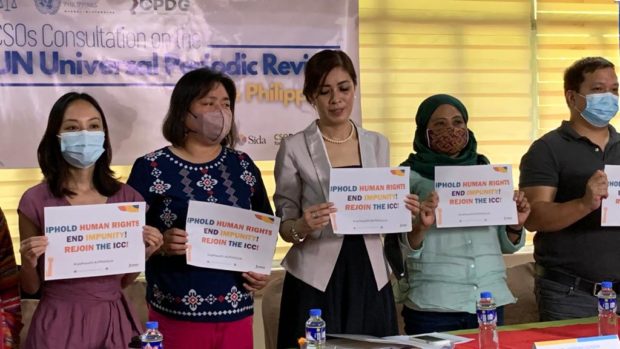 Commission on Human RIghts Executive Director Jacqueline de Guia holds a press briefing with civil society organizations’ representatives about consultations for their report, which will be crafted ahead of the UN Universal Periodic Review of the rights situation in the Philippines. INQUIRER.net photo / Gabriel P. Lalu

MANILA, Philippines — The Commission on Human Rights (CHR) has assured the public and stakeholders that civil society organizations have a voice and role to play in the human rights report that the commission would be crafting for the United Nations (UN) Universal Periodic Review (UPR).

CHR hosted a press conference in which spokespersons from some civil society organizations (CSOs) provided input into the UPR report. According to CHR Executive Director Jacqueline de Guia, the process ensures the State is committed to human rights.

De Guia said that they want to make the public aware of the UPR as another mechanism to ensure that the rights of people are protected and upheld.

“We want to make sure that all grassroots sectors are well-represented, and more importantly that they are given a face and a voice in this whole process. We wanted this process to be an inclusive and consultative process that will make sure that of course, the issues on the grounds are surfaced and threshed out,” de Guia said.

“The reason why we came up with a press conference is to make sure that we are able to popularize the Universal Periodic Review as a process that enables all member-states of the United Nations to periodically review the human rights situation in their own domestic jurisdictions,” she added.

On the sidelines of the event, De Guia explained the following:

– the UN’s Universal Periodic Review is held every five years, and the Philippines’ last UPR was in 2017

– CHR and other rights organizations prepare a report detailing observations and concerns about the rights situation in the Philippines, which observers and member states can use to countercheck the government.

– the UPR would not be an evaluation of Marcos’ term but rather of the past five years, meaning former president Rodrigo Duterte.

“The UPR is anchored on the national report, particularly of the government — that is one of the resources about the human rights situation on the ground. Of course, other sources will be those reports coming from special rapporteurs or committees under the United Nations, under those treaty mechanisms that we have,” de Guia said.

She said the third source of information will be from national institutions, and human rights organizations such as the CHR, which have their global counterparts overseas.

CHR also gave the civil society representatives a chance to speak and to share what they intend to recommend in the CHR report. One of the most pressing concerns raised by the speakers is the frequent red-tagging, or the practice of linking people to communist rebels, received by rights workers and people expressing legitimate dissent.

Joanna Concepcion of Migrante International, who represents migrant workers, said that government inaction in many complaints filed by overseas Filipino workers relating to their work — domestic abuse, illegal recruitment and trafficking, and others — is a major problem for their sector.

However, red-tagging has also affected them, as Concepcion stressed that the National Task Force to End Local Communist Armed Conflict (NTF-ELCAC) has accused their leaders of being part of the communist movement, which makes their work harder.

“Our main statement in our submission, conclusion for the period of 2017 to 2022 is that Filipino migrants who experienced human rights abuses and violations while working overseas or residing overseas, mainly labor contract violations, illegal recruitment, human trafficking, gender-based violence among others, have faced challenges in seeking immediate and comprehensive assistance from the Philippine government,” Concepcion said.

“Also, the rights of our Filipino migrants to free association and expression have also been violated as Filipino migrant leaders and organizations overseas have also been targeted by red-tagging, the campaign by the NTF-ELCAC overseas. So this kind of environment prevents our migrant organizations from supporting the needs of our migrants (on) the ground,” she added.

Abner Manlapaz who represents persons with disabilities (PWDs) lamented the government’s supposed insincerity over their plight, claiming that the budget for their sector has been going down.

He said two out of three children with disabilities are not in school, and 69 percent of disabled workers are unemployed, proving that the disabled are not in the best position in our society.

“Although we have been advocating for a long time for an increase in the budget for supporting those of us with disabilities, the budget has not been increasing and has even decreased in recent years. As a result of the budget, the government shows that it is serious about meeting the needs of its citizens,” he said in Filipino.

As of May 2022, government data showed that at least 6,248 drug suspects were killed from July 2016 to April 2020 during legitimate operations by state forces.

However, some opposition figures have claimed that the number could be between 12,000 to 30,000 drug war deaths — a figure reflected in the complaints against Duterte and other drug war implementers before the ICC.

Duterte is facing crime against humanity complaints for mass murder for his role in the drug war. The former president claimed that the drug war was needed to prevent the Philippines from becoming a narco-state.

CHR’s own probe said that the drug war encouraged impunity and failed to protect the people while adding that some police officers had the intent to kill in operations. The commission also noted confusing and fake findings in several drug war cases.