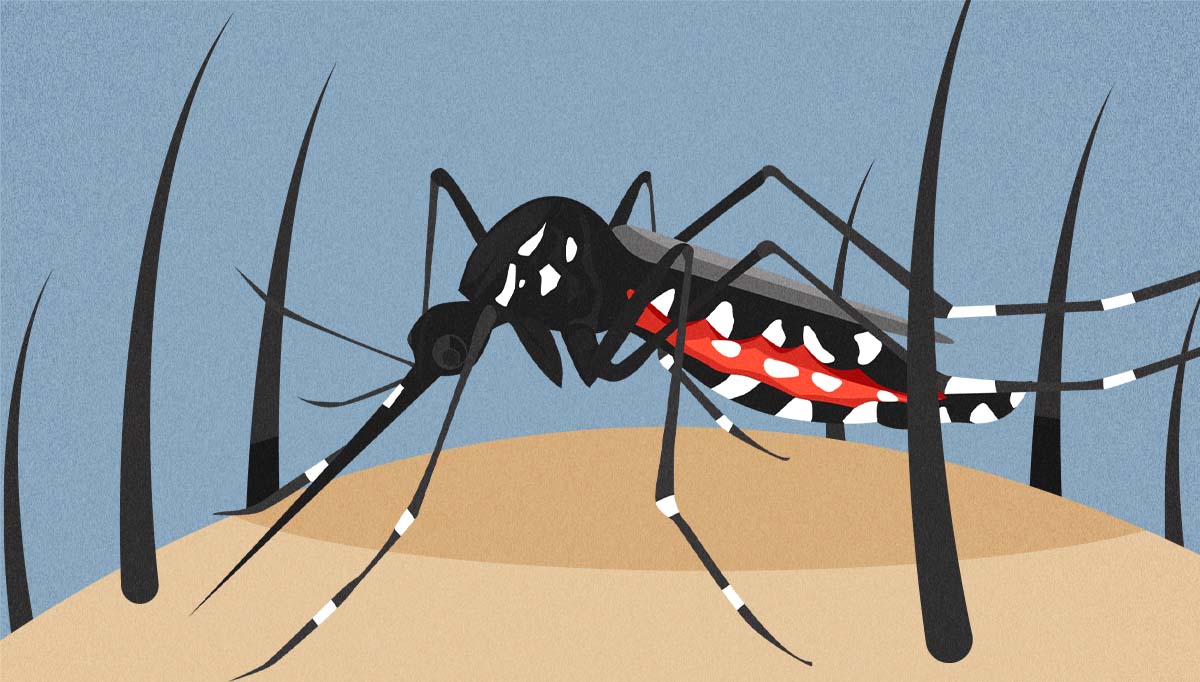 MANILA, Philippines—Amid the rise of dengue cases and deaths in many countries worldwide, including the Philippines, scientists are playing God to combat the disease by tinkering with the genetic makeup of mosquitoes and bringing harmless bacteria into the picture.

Dengue is a viral infection transmitted to humans by the bite of infected mosquitoes. The virus responsible for causing the disease is called dengue virus (DENV)—which has four serotypes.

Not all mosquitoes, however, can transmit the virus to humans. 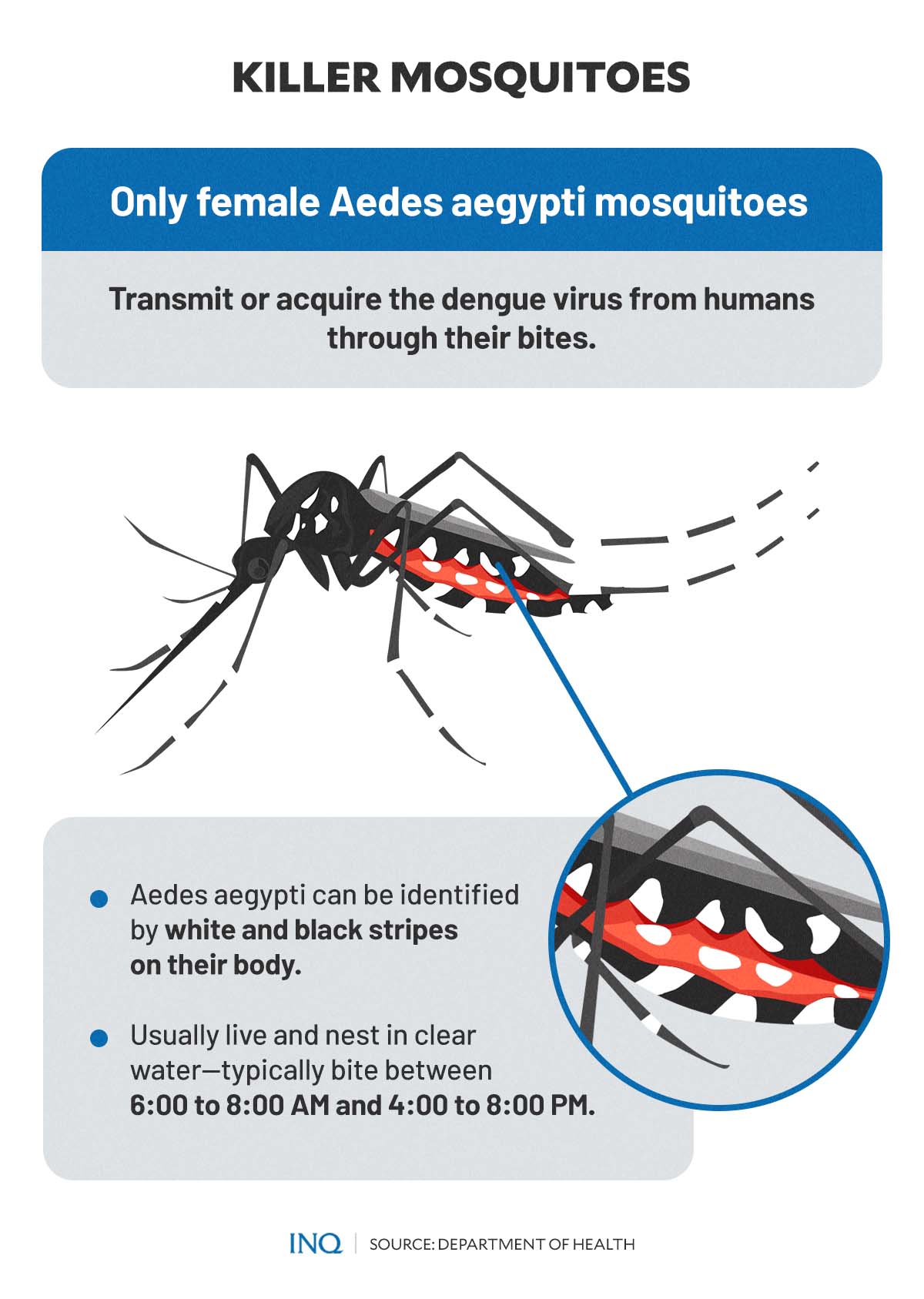 According to the Department of Health (DOH), dengue infection is caused by DENV from female mosquitoes of the Aedes aegypti genus. A bite from these mosquitoes can also spread chikungunya, Zika, and yellow fever viruses.

Aedes aegypti can be identified by the white and black stripes on their body. These mosquitoes—which usually live and nest in clear water—typically bite between 6:00 to 8:00 AM and 4:00 to 8:00 PM.

In past years, the World Health Organization (WHO) observed that the global incidence of dengue had grown dramatically, with about half of the world’s population now at risk. An estimated 100 to 400 million infections occur yearly, but over 80 percent are generally mild and asymptomatic.

Although early detection and access to proper medical care help lower the fatality rates of severe dengue to below 1 percent, WHO emphasized that there is no specific treatment for dengue infections yet.

In search of ways to help reduce dengue cases and deaths worldwide, the World Mosquito Program (WMP)—a non-profit group based in Australia—used a natural bacteria called Wolbachia, while Oxitec—a US-owned company—relied on biotechnology and genetic modification.

In this article, INQUIRER.net will look closely at how these international organizations help dengue-prone communities through scientific breakthroughs.

In 2009, the WMP’s research team discovered that a bacteria called Wolbachia could prevent the transmission of dengue and other human disease-causing viruses carried by Aedes aegypti mosquitoes.

“We no longer need to shorten the lifespan of the mosquitoes. If the mosquitoes live their regular lifespans, they have more time to breed and pass on the Wolbachia, which stops the virus from passing from mosquitoes to humans,” WMP said.

Wolbachia, according to WMP, are extremely common bacteria that occur naturally in 50 percent of insect species, including mosquitoes, fruit flies, moths, dragonflies, and butterflies. 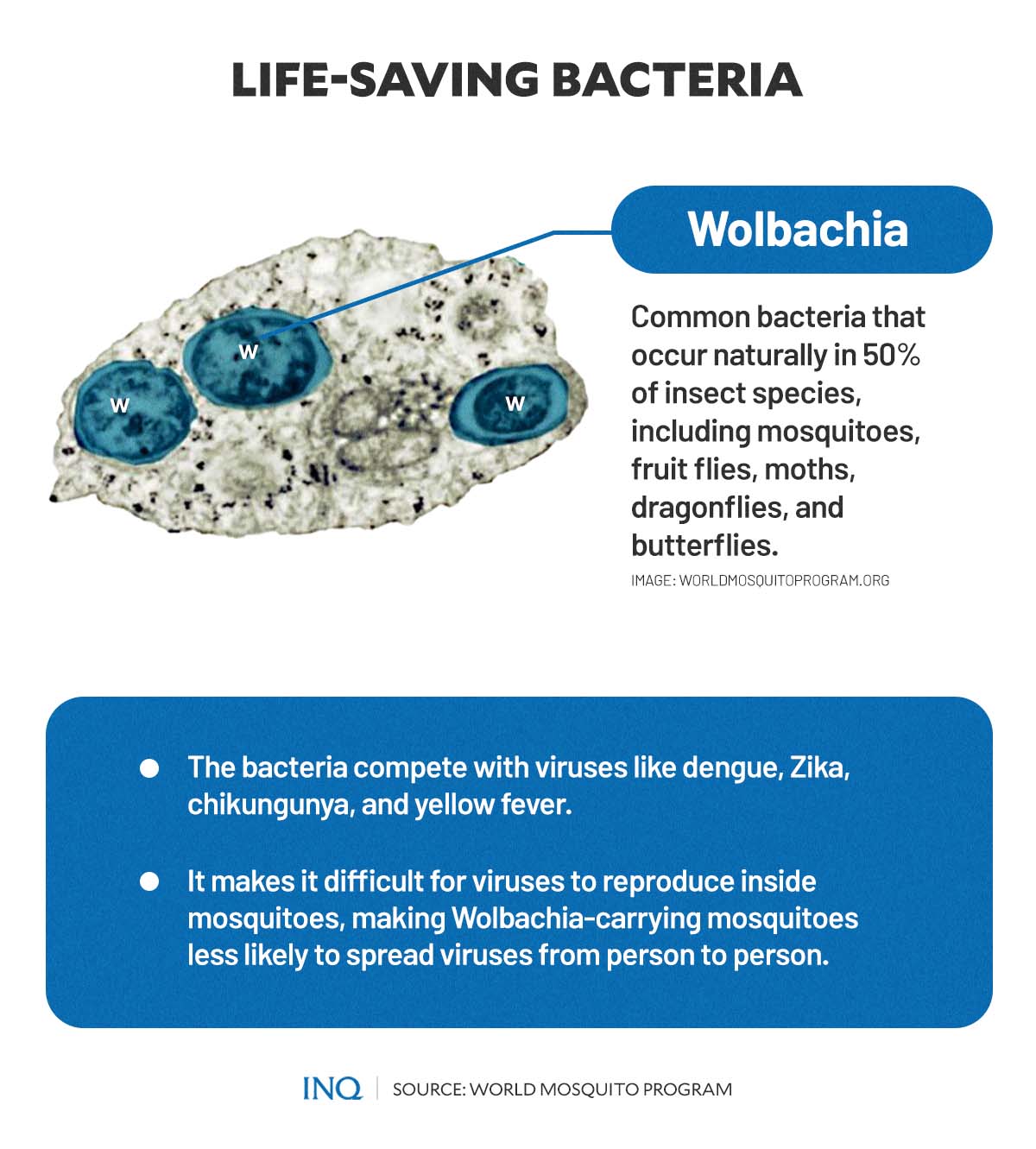 Aedes aegypti or dengue-carrying mosquitoes, however, do not normally carry Wolbachia.

Studies showed that the bacteria make it difficult for viruses, such as dengue, Zika, chikungunya, and yellow fever, to reproduce inside the Aedes aegypti mosquitoes—making the mosquitoes much less likely to spread viruses when they bite people.

“This means that when Aedes aegypti mosquitoes carry natural Wolbachia bacteria, the transmission of viruses like dengue, Zika, chikungunya, and yellow fever is reduced,” the organization explained.

The WMP breeds Wolbachia-carrying mosquitoes and releases them into areas hit by mosquito-borne diseases. This means there will be “less risk of disease in communities where Wolbachia is established in the local mosquito population.”

From one generation to the next

So how does the “Wolbachia method” work?

It all begins when the Wolbachia is introduced into a mosquito egg. This process is usually done in WMP’s laboratories, where a suitable Wolbachia strain is injected into Aedes aegypti mosquito eggs.

“When the bacterium is introduced into Ae. aegypti eggs, the dengue virus is unable to replicate in the modified mosquitoes that hatch. The exact mechanisms for this are unclear, but some experts suggest that Wolbachia outcompetes the virus for resources such as lipids or turbocharges the host’s immune response,” an article published in the peer-reviewed journal Nature said. 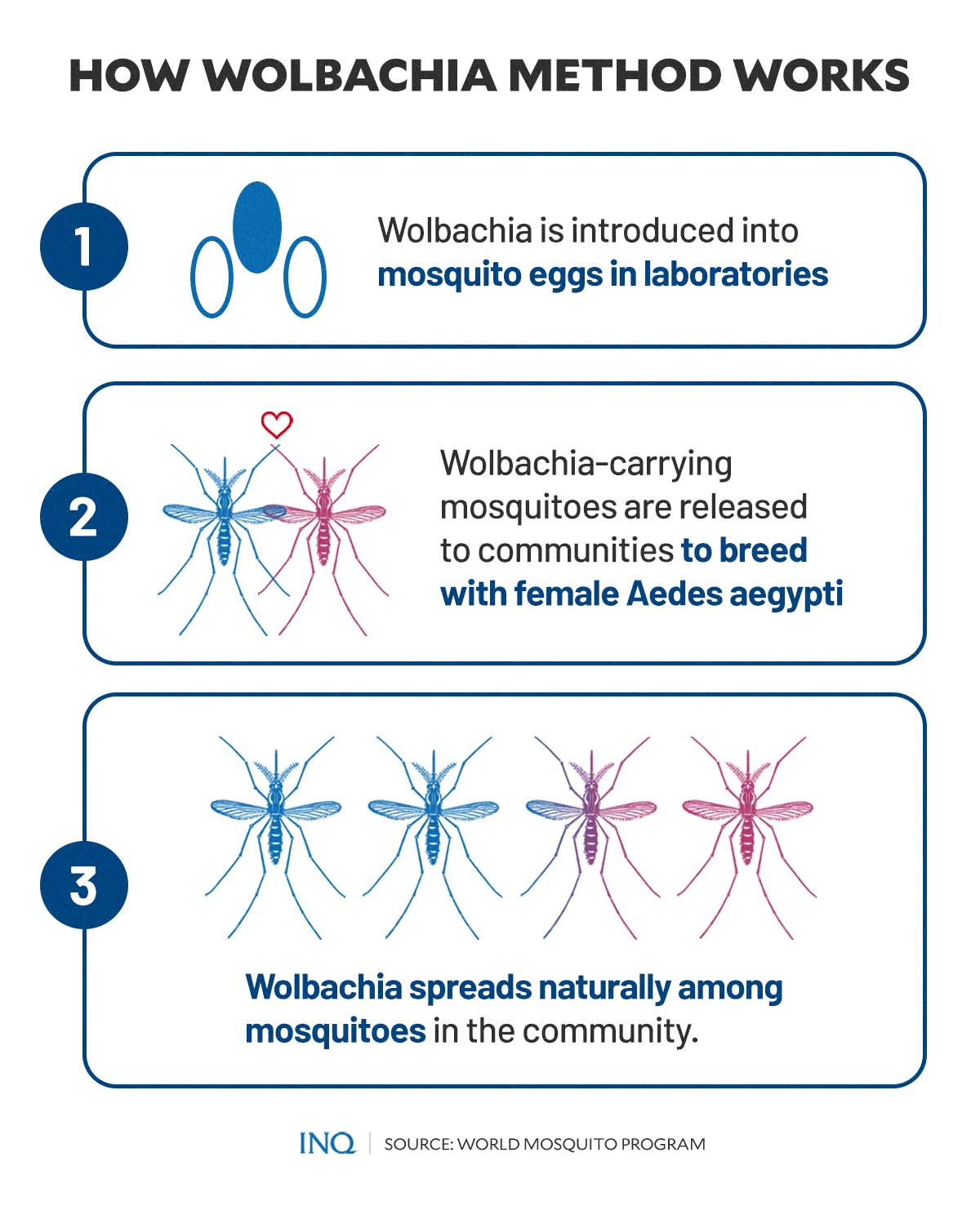 Once the modified, or Wolbachia-carrying, mosquitoes hatch and mature, they are released to breed with local mosquito populations—resulting in an increase in the number of mosquitoes that carry the helpful bacteria.

Simply put, “the Wolbachia [that] live inside insect cells and are passed from one generation to the next through an insect’s eggs.”

“Since Wolbachia-carrying mosquitoes can’t transmit diseases, the incidence of mosquito-borne diseases reduces or is eliminated in areas where Wolbachia is established at high levels.” 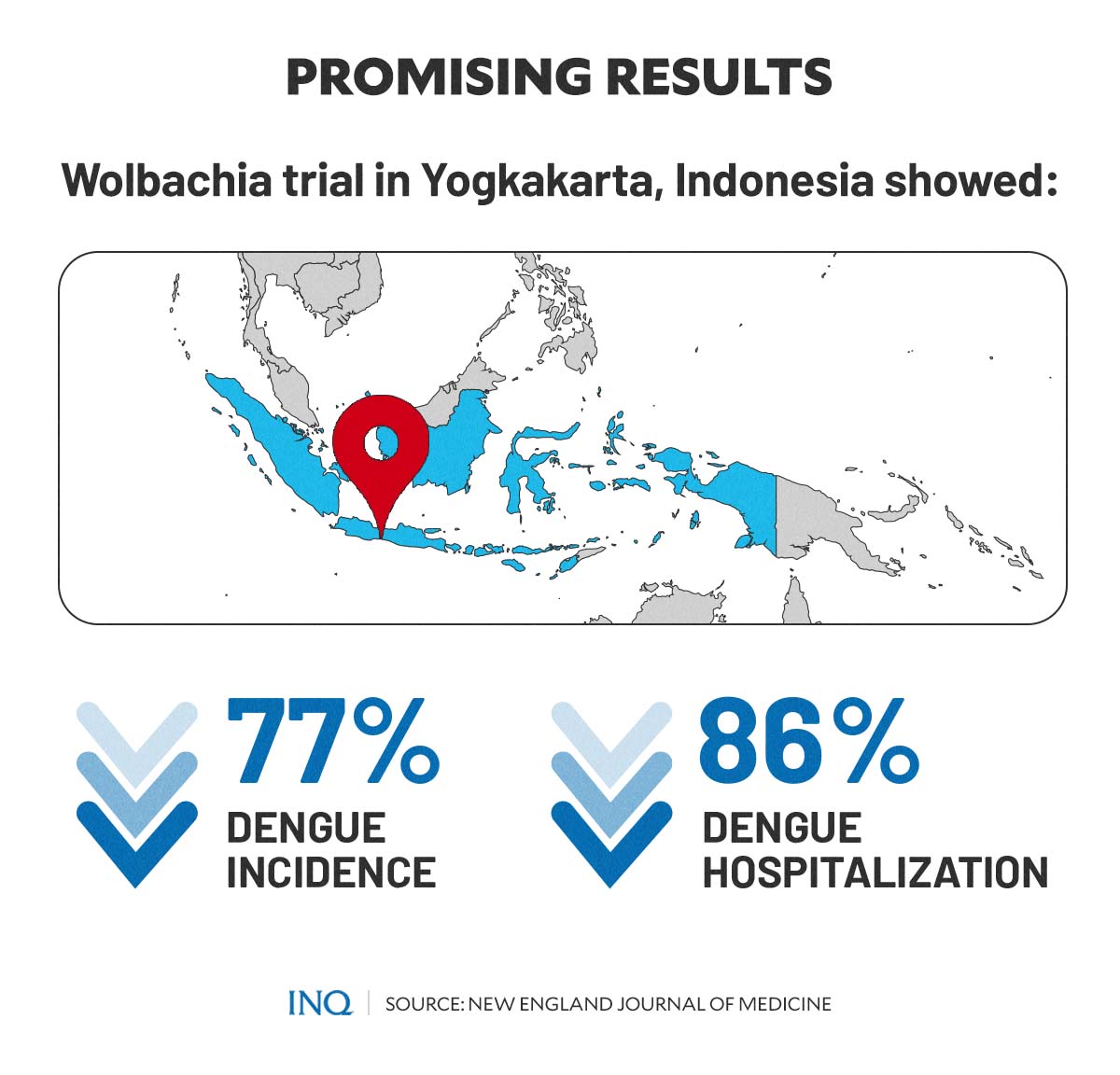 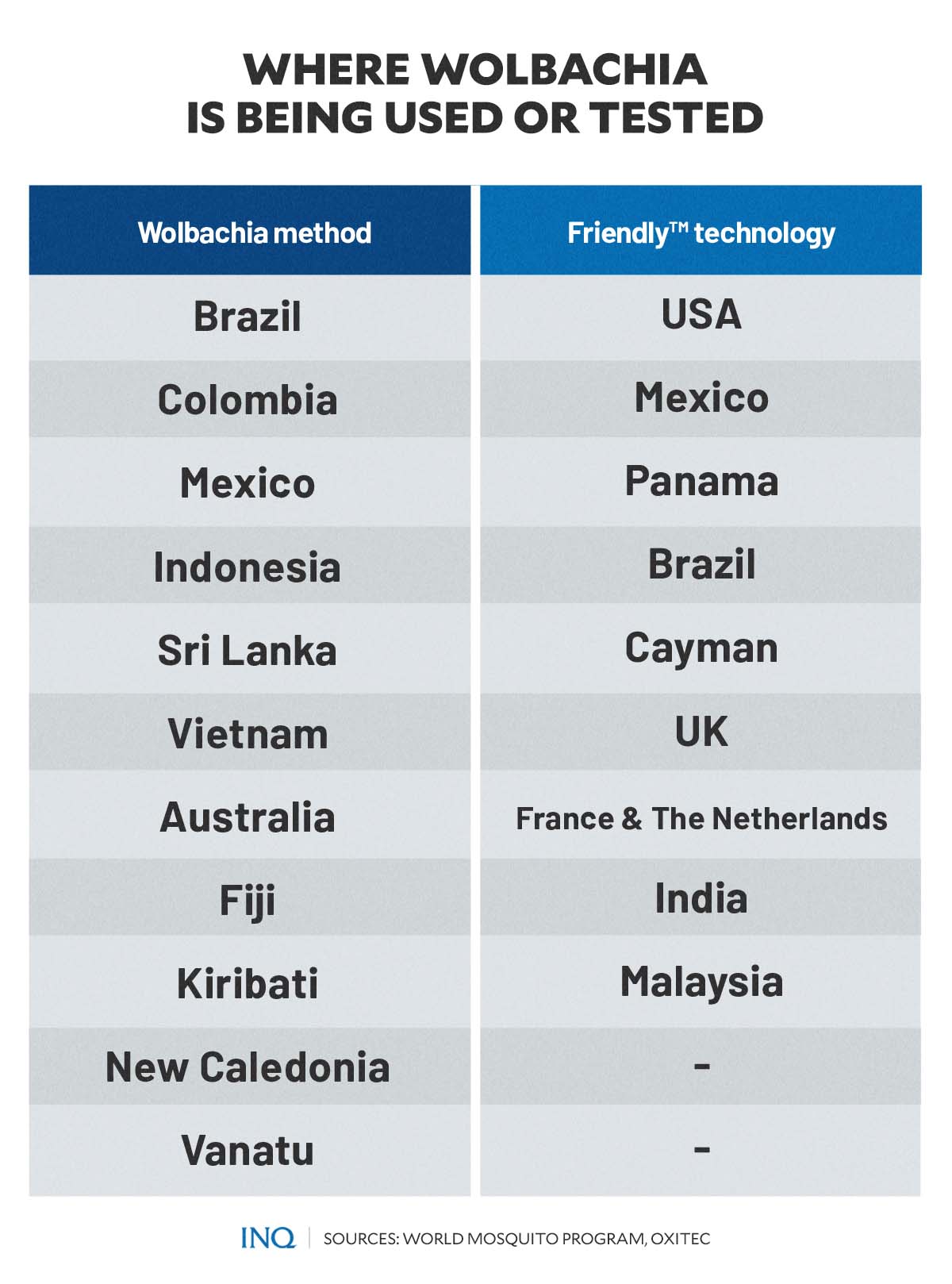 The group had already begun working with communities across the globe to help combat large-scale outbreaks of mosquito-borne disease. The program has so far reached several countries and territories, such as:

Wolbachia-carrying mosquitoes have already been released in some countries, producing positive results.

Compared to the Wolbachia method, which focuses on naturally preventing the transmission of mosquito-borne diseases, private firm Oxitec applies a more drastic tactic against the war not only on dengue but mosquitoes in general.

The company relies on genetic modification and releases genetically modified mosquitoes in several communities in countries and territories worldwide, including the United States, Mexico, Panama, Brazil, Cayman, the United Kingdom, France, the Netherlands, India, and Malaysia.

Unlike WMP, Oxitec uses male mosquitoes, which they said will pass on a gene called the “self-limiting gene” that kills female offspring before they mature. Only female mosquitoes bite.

According to the company, this gene disrupts the proper functioning of the insects’ cells by overproducing a protein, interfering with the mosquito cells’ ability to produce other essential proteins needed for development.

Oxitec adjusted the gene to function only in females “to enable large-scale and simple production of Friendly males only, and to target the pest female, which is frequently the most damaging.”

The altered gene will continue to be passed on as male offspring—which have inherited and copied the self-limiting gene—mate with female mosquitoes.

“With regular releases of Friendly males, the number of offspring—in most versions of the technology, specifically the damaging female offspring—is reduced, resulting in a reduction in the pest insect population,” the company said.

“Friendly males, and offspring carrying the self-limiting gene, can be tracked through the linked fluorescent marker gene,” it added.

The process begins by breeding “Friendly males” or genetically modified male mosquitoes—which started in 2013—in laboratories. These mosquitoes are then released in communities.

“Our males have one job: to find pest females and mate with them,” Oxitec explained.

While there are debates and differences in the sustainability, effectivity, scale, and affordability between the methods used by WMP and Oxitec, several studies have shown promising results for both methods.

Last year, results of the randomized controlled trial (RCT) conducted by the WMP and the Gadjah Mada University to measure the efficacy of deploying battalions of Wolbachia-carrying mosquitoes in reducing dengue incidence was published in The New England Journal of Medicine.

“There have been a lot of people watching our work over the years – waiting to see the results of this trial. Now that they’re published, people don’t need to take our word for it. The data is there that this really works to prevent dengue.” she added.

WMP also said that compared to other methods used to control dengue-carrying mosquitoes, the Wolbachia method is more sustainable and affordable.

On the other hand, results of the first open-air study of genetically modified mosquitoes by Oxitec were released recently. According to the company, the findings of the study were “favorable.”

Around five million “Friendly mosquitoes” were released for the experiments in April 2021 in the Florida Keys. To gauge if the technique is effective, Oxitec researchers left traps that served as egg-laying sites and for gathering adult mosquitoes.

At the end of the experiment, the researchers collected over 22,000 eggs from the traps and took them back to their laboratory to hatch under observation.

They also discovered that the self-limiting gene persisted in the wild population for at least two to three months, or about three generations of mosquito offspring, before it disappeared.

Aside from these hopeful trial results, it is worth noting that both the Wolbachia-carrying mosquitoes and the genetically modified male mosquitoes are harmless or safe for human health.