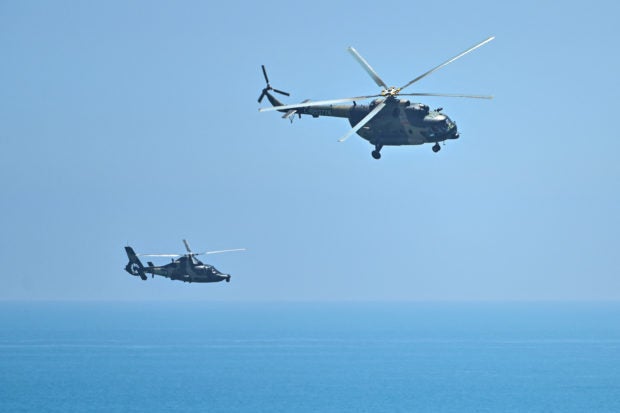 Chinese military helicopters fly past Pingtan island, one of mainland China’s closest point from Taiwan, in Fujian province on August 4, 2022, ahead of massive military drills off Taiwan following US House Speaker Nancy Pelosi’s visit to the self-ruled island. AFP

TAIPEI — Taiwan will hold live-fire military drills this week simulating a defense of the island against a Chinese invasion, officials said Monday, as Beijing carries out fresh exercises around its neighbor.

The self-ruled, democratic island lives under the constant threat of invasion by China, which sees it as part of Chinese territory to be reclaimed one day, by force if necessary.

The island’s forces will hold anti-landing exercises in the southernmost county of Pingtung on Tuesday and Thursday, the Taiwanese army said.

They will include the deployment of hundreds of troops and about 40 howitzer guns, the army said.