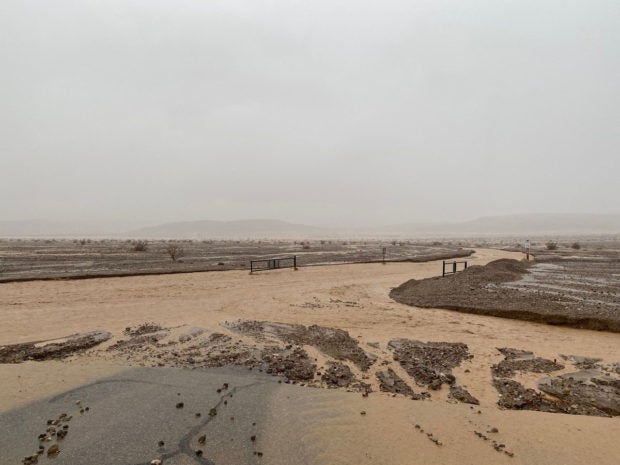 Flash flooding triggered by a near-record downpour on Friday over one of the hottest, driest spots on Earth has stranded nearly 1,000 people inside California’s Death Valley National Park and forced its temporary closure, park officials said.

About 60 cars belonging to park visitors and staff were buried in several feet of debris at the Inn at Death Valley, an historic luxury hotel near the park headquarters in Furnace Creek, site of a spring-fed oasis near the Nevada border, the park said in a statement.

Floodwaters also pushed trash dumpsters into parked cars, shoving vehicles into each other, and swamped many facilities, some hotel rooms and business offices, it said.

No injuries were reported. But about 500 visitors and 500 park staff were unable to leave the park because all roads into and out of Death Valley were closed, according to the statement.

A water treatment system that serves the Cow Creek area for park residents and offices was knocked out of service.

The flooding was unleashed by a torrential shower that dumped 1.46 inches (3.7 cm) of rain at Furnace Creek, nearly matching the previous daily record there of 1.47 inches measured from a downpour in 1988, park spokesperson Amy Wines said.

By comparison, the park averages 2.2 inches of rainfall per year, making it the driest place in North America. Furnace Creek holds the record for the highest temperature ever recorded on Earth, 134 degrees Fahrenheit (56.7 degrees C), Wines said.

Flash floods from monsoonal rains are a natural part of Death Valley’s ecology and occur somewhere in the park almost every year, constantly carving and reshaping its dramatic canyon landscape.

But flooding of a scale seen Friday last struck Death Valley in August 2004, forcing a 10-day closure of all its roads and killing two people whose vehicle was swept away, according to Wines.

The U.S. Park Service said no further monsoonal rain was expected imminently, but additional showers were forecast in the days ahead. It was not immediately clear how soon the park would reopen to road traffic.

Scorching temperature in US’s Death Valley could be global high