Not even Superman can fix Myanmar crisis, regional envoy says 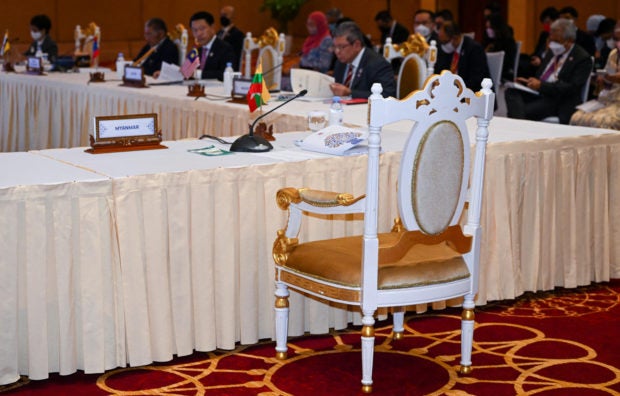 The empty chair of Myanmar’s Foreign Minister is pictured during a Plenary Meeting session of the 55th Association of Southeast Asian Nations (ASEAN) Foreign Ministers Meeting in Phnom Penh, on August 3, 2022. Myanmar is not be represented at the meeting after the other members said they would not accept a junta minister and the generals refused to send another official instead. (AFP)

Myanmar has spiralled into civil war since a putsch in February last year, with the death toll from the military’s brutal crackdown on dissent passing 2,100, according to a local monitoring group.

The 10-country Association of South East Asian Nations (ASEAN) has spearheaded so far fruitless efforts to resolve the turmoil, and acknowledged in a joint statement on Friday the lack of progress around a five-point crisis resolution plan.

ASEAN special envoy Prak Sokhonn, who has made two trips to Myanmar since the coup, dampened expectations for major progress in the short term.

“I am just a special envoy, I am not a superman,” he told reporters in Phnom Penh Saturday.

“I think that even Superman cannot solve the Myanmar problem.”

Anger is growing within ASEAN over Myanmar generals’ stonewalling of the peace plan, particularly after the execution last month of four prisoners — including two prominent pro-democracy figures.

The plan, agreed in April last year, calls for an immediate end to violence and dialogue between the military and the anti-coup movement.

“Issues cannot be solved by one meeting, by two meetings, by many years of meeting,” said Prak Sokhonn, who is also Cambodia’s foreign minister.

“Negotiation takes years, like the issue in Myanmar. After two visits of the special envoy, two visits only, some people start to lose patience and ask for results,” he added.

The minister flagged a possible third trip to Myanmar in early September — contingent upon progress on the five-point plan.

“Especially if — and I say it clearly, publicly — if more executions are conducted, then things would have to be reconsidered,” he said.

His remarks built on Friday’s joint statement, which emphasised the need for some concrete action from the junta ahead of the ASEAN leaders’ summit in November.

Prak Sokhonn must be allowed to meet with “all relevant stakeholders”, the statement added, alluding to the junta’s decision to block access to deposed leader Aung San Suu Kyi.

Earlier in the week, Malaysia — which has led calls for tougher action — indicated that Myanmar could face suspension from the bloc should members not see progress ahead of the leaders’ summit.