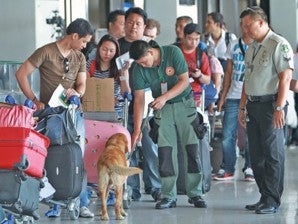 AIRPORT SECURITY Among the concerns raised by international air safety organizations is the alleged inadequacy of security systems in the country’s airports. INQUIRER PHOTO

The US Federal Aviation Administration (FAA) has found 23 “critical elements” which the Civil Aviation Authority of the Philippines (CAAP) needs to address before the country can regain its “Category 1” safety status.

The rating of the country has been downgraded to Category 2 five years ago because it has failed to comply with world safety standards.

CAAP Director General Ramon Gutierrez said the critical elements were cited by the FAA during its technical review of the country’s aviation standards from Jan. 23 to 27.

“The issues mentioned during the technical review were relatively minor issues and are now being addressed by the agency,” Gutierrez said during Monday’s press briefing.

He said the FAA evaluated the country’s aviation infrastructure to check the number of qualified inspectors watching over air carriers and to assess air traffic-control procedures, among others issues.

The FAA technical review serves as a prelude to the actual audit when the CAAP is expected to be given its rating, based on the oversight’s compliance with international safety standards set by the International Civil Aviation Organization (ICAO).

“It was not an audit but only a review, which was requested by the CAAP to help us prepare for an actual audit to be made by the FAA,” Gutierrez said.

Among the 23 issues were minor amendments to Republic Act No. 9497, the primary aviation law that created the CAAP.

The issues also include fine-tuning of the Philippine Civil Air Regulations, changes in CAAP safety and oversight structure, upgrading of its database system, standardization of the agency’s certification of safety inspectors and revalidation of airline carriers.

In 2007, the FAA, after undertaking an International Aviation Safety Assessment on the Philippines, downgraded the country’s rating to Category 2.

This means that the country does not comply with world safety standards set by the ICAO.

The ICAO later conducted its own audit in October 2009 that resulted in findings of a Significant Safety Concern, thereby reinforcing the FAA findings. It cited “open items” or unmet issues on the implementation of air safety oversight, and inadequate security systems.

In 2010, the European Union, following the FAA’s lead, also blacklisted the Philippines and banned Philippine carriers from flying to Europe.

But while the Category 2 status remains in effect, the country’s civil aviation continues to improve with the considerable increase in international flight services entering the country.

Gutierrez said the CAAP technical team would be flying to the FAA headquarters in Washington next month to present the agency’s action plan on how to address the 23 critical elements.

“We hope to get a positive feedback on our action plan so we can implement the changes and then request for a formal FAA audit in the hope of getting back the Category 1 status,” Gutierrez said.

He said the CAAP was ready to be responsive to the call of the times and to meet global standards.