FVR in the eyes of reporters: An ally of democracy, free press 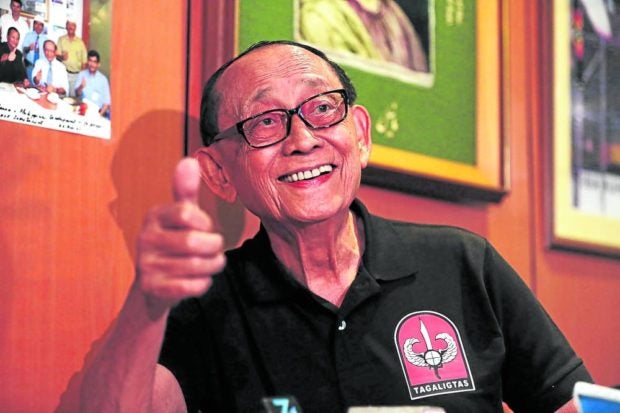 MANILA, Philippines — A general who restored and guarded the country’s democracy. A president who knew the importance of a free press.

These were how several reporters pictured late former president Fidel V. Ramos as they paid homage to him Friday night at The Heritage Park in Taguig City.

According to them, FVR – as most people would recognize him – was a workaholic; someone who brought political stability and economic growth to the country.

Markedly, they said, FVR could be regarded as the most approachable and available president who understood the benefits of a thriving free press for a country – although he found some news disagreeable. He was always game for press conferences, ambush interviews, or exclusive talks, and even made sure to tag along his officials for the questioning and evaluation.

Veteran journalist Manny Mogato, who started covering FVR since he took part in the bloodless people’s revolt that ousted the dictatorship of then-president Ferdinand E. Marcos – father of the current president, Ferdinand “Bongbong” Marcos, said that FVR disliked some reporters but never moved a finger to restrict journalists or close down news organizations.

“I know he disliked some reporters who were very critical of him, that’s understandable, but he does not show it. Wala siyang binan sa Malacañang, at wala rin siyang pinasarang news organization,” Mogato said during a program streamed by “The FVR Legacy” on its Facebook page.

“He jealously guarded his legacy, he wanted to be remembered as the general who restored and guarded democracy; the president who broke monopolies and made peace with the enemies of the government.  During his six years in office, there was political stability, and the economy grew,” he added. 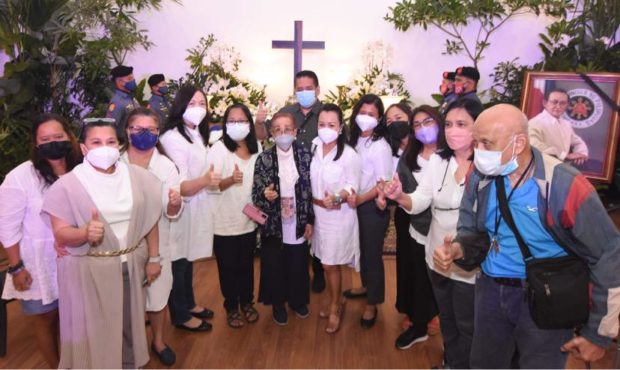 Former members of the Malacañang Press Corps in the wake of former President Fidel V. Ramos at The Heritage Park in Taguig City on Friday, August 5, 2022. In the middle is Mrs. Ming Ramos, widow of the late Chief Executive. – Reporters paid tribute to Ramos, saying he was an ally of Philippine democracy and free press. Photo from RPDev/ Revoli Cortez

Velasquez — who displayed an uncanny ability to mimic Ramos’ iconic voice — recalled that the former president would always fold a newspaper that published a story he did not like in such a way that its masthead would be concealed before expressing his displeasure over an article.

Velasquez also recognized that FVR always seemed to make himself available to queries — even jokingly telling reporters that he would be the one to interview them, which made him different from other politicians who would rather deny requests for interviews.

“That spoke a lot about the type of president that FVR was, that he would take the time, and the effort, to clarify issues, to respond to reporters’ questions, and also accommodate our not-so-frequent ambush interviews.  Paminsan ‘yan kung meron siyang mga out-of-town sorties, hinihintay namin siyang matapos do’n sa kanyang activity,” Velasquez remembered.

“Kami naman, ‘yong press corps, we would be waiting on the sidelines trying to see if we could get an opportunity to approach him and maybe ask him some questions. We never got a chance to do that because siya na ‘yong lumalapit. So after he’d finish doing his activity, lalapit ‘yon, siya pa ‘yong magtatanong na ‘So, can I interview you?’ So syempre naman kami tuwang-tuwa,” he added.

Mogato likewise noted: “He was the best president in the post-Edsa period. He was also the most accessible president, he had a weekly press conference, every Wednesday in Malacañang, and gave exclusive interviews to all media organizations that would make a request.”

Velasquez also brought to mind one instance when FVR accidentally lost his dentures during an event, which surprised many people due to the former president’s subsequent action.

Instead of covering up and being afraid of criticism, FVR actually called up reporters and photographers to take a photo of him without a dentures.

“But no, what he did was instead was tinawag niya sila Bullit, ‘yong iba pang mga photographers, sinabi niya ‘Oy halika dito ku’nan niy ‘yong bungi ko’.  And that it made it to the front pages — si FVR, flashing a smile with one tooth missing,” he added. 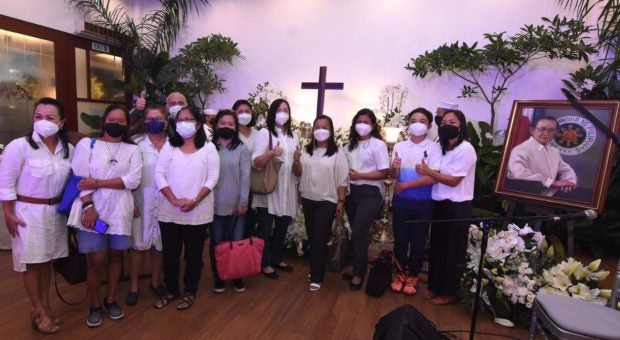 Former members of the Malacañang Press Corps in the wake of former President Fidel V. Ramos at The Heritage Park in Taguig City on Friday, August 5, 2022. – Reporters paid tribute to Ramos, saying he was an ally of Philippine democracy and free press. Contributed photo

Mogato, meanwhile, acknowledged that FVR never let his emotions get the best of him, refraining to show weakness in every moment.

He then narrated incidents when FVR would show “stability and grace under pressure” even in the face of danger.

“I’ve seen him in his low and high moments, but he never showed it in public, his weaknesses. He had an image of stability and grace under pressure. He was the last person to emerge from a burning Fokker plane when it overshot a runway in Catarman, Northern Samar,” Mogato said.

“In another incident, he reassured us when another Fokker plane lost altitude during a flight from Zamboanga to Cotabato when one of its engines conked out. And he was very calm when a UH-1 Helicopter nearly slammed the mountains during bad weather in Eastern Samar, a day before his birthday,” he added.

The former president was a key figure in the 1986 People Power Revolution that toppled the regime of his cousin Marcos.

During the bloodless revolution, he and former defense minister Juan Ponce Enrile turned away from the Marcos regime and formed a band of soldiers in Camp Aguinaldo. which was being protected at the time by a sea of people opposing the martial rule.

During his presidency, FVR led peace negotiations between the government and the Moro National Liberation Front (MNLF), which resulted in a peace agreement in 1997.  He was also often credited for resuscitating the economy into competitiveness through sound economic policies.