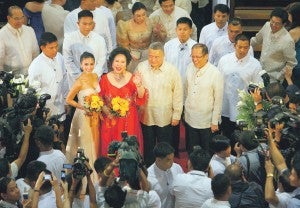 Like anyone walking down the aisle, she had mixed feelings.

“I feel like a blushing bride,” said Sen. Miriam Defensor-Santiago, who arrived in a ruby red gown with minutes and a snappy quip to spare before her 6 p.m. altar date.

“But I must set the record straight that I’m a veteran housewife,” she stressed, drawing chuckles from reporters.

The feisty senator and her husband, lawyer Narciso Santiago Jr., renewed their vows on Sunday night at Manila Cathedral before a powerhouse entourage led by President Benigno Aquino III, in solemn rites not even a tropical depression could spoil.

The Santiagos, all smiles as they entered the church arm in arm, exchanged “I do’s” in a Mass marking their 40th wedding anniversary and officiated by Manila Archbishop Gaudencio Cardinal Rosales.

Mr. Aquino, a 50-year-old bachelor, stood as best man and dutifully waited at the altar for the maid of honor, show-biz celebrity Heart Evangelista, to march in with the rest of the VIP entourage.

Santiago Jr., a former local government undersecretary, slipped into the church about 20 minutes before the ceremony and was practically unnoticed by the mob of reporters positioned at the main door.

Estrada, whom Arroyo replaced following his ouster in 2001, shook her hand in greeting when she arrived wearing a neck brace from her hospital treatment last week. The brace was taken off when Arroyo joined the procession of sponsors.

“I wish that they reach their 50th anniversary,” Estrada said before the ceremony.

In his homily, Rosales started off by highlighting the Feast of the Holy Trinity and went on to describe the marriage of the Santiagos as “a celebration of God’s love.”

“This love and celebration is replicating that life in the Trinity,” he said.

In a message seen by many as a reiteration of the Church’s stand against divorce and artificial contraception, Rosales said God created man and woman to “mirror His holiness and goodness.” 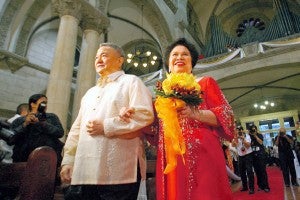 LIKE BLUSHING BRIDE Sen. Miriam Defensor-Santiago walks down the aisle with her husband, lawyer Narciso Santiago Jr., to renew their vows on their 40th wedding anniversary in a powerhouse gathering at Manila Cathedral. RAFFY LERMA