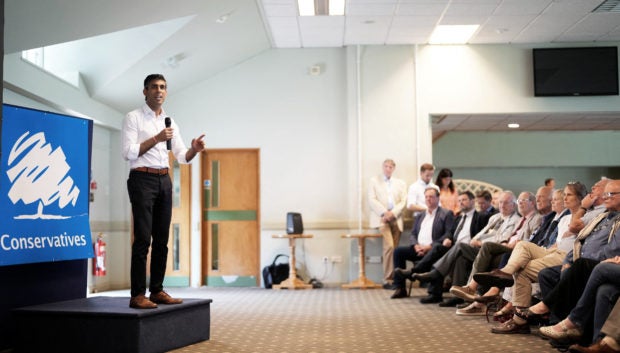 Rishi Sunak speaks during an event as a part of his campaign to be leader of the Conservative Party and the next prime minister in Ludlow, Britain. August 3, 2022. Jacob King/Pool via REUTERS

LONDON — Former British finance minister Rishi Sunak said it was still “early days” in the contest to replace Prime Minister Boris Johnson, as two opinion polls showed his rival Liz Truss had extended her lead in the race to be Britain’s next leader.

The ruling Conservative Party is choosing a new leader after Johnson was forced to announce his resignation when ministers resigned en masse from his government citing a series of scandals and missteps over the last 12 months.

Sunak, whose resignation helped trigger Johnson’s downfall, and Foreign Secretary Truss are the two remaining candidates in the contest.

“It’s still early days and I’m looking forward to meeting many more of you in the coming weeks,” Sunak said on Twitter.

The party’s members will vote by postal ballot or online over the next few weeks with a winner announced on Sept. 5. Plans to allow voters to change their mind at the last minute were abandoned over concerns about the security of the online voting system.

The winner of the party leadership contest will inherit a parliamentary majority and therefore become prime minister.

On Tuesday an opinion poll showed Truss held a 34-point lead over Sunak among Conservative Party members, with 86% telling pollster YouGov they had decided how they would vote.

A survey of 1,003 party members, carried out by the Conservative Home website and published on Wednesday, put Truss on 58% and Sunak on 26%, with 12% saying they were undecided.

However, polling officials say there are doubts about the reliability of measuring the support among the roughly 200,000 Conservative party members. Far fewer polls are carried out on this group, who make up about 0.3% of the British population, than among the public before elections.

Sajid Javid, a former health minister and finance minister who was knocked out of the leadership contest in one of the earlier rounds, said on Wednesday he was backing Truss because of her willingness to “challenge the status quo” and her plans to cut taxes immediately.

“Tax cuts now are essential. There are no risk-free options in government. However, in my view, not cutting taxes carries an even greater risk,” he wrote in the Times. He joins several other former candidates in backing Truss. 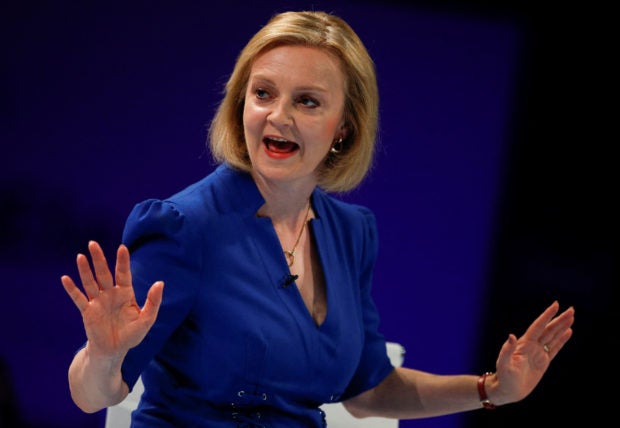 Truss suffered the first major misstep of her campaign on Tuesday when she was forced to backtrack on one of her most striking pledges a day after announcing it following a backlash from fellow Conservatives and opposition parties.

Truss had set out plans to save billions of pounds a year in government spending in a pledge opponents said would require cutting the pay of public sector workers, including nurses and teachers, outside of the wealthy southeast of England.

Sunak has struggled in the race, partly due to his role in Johnson’s resignation and over his record in government.

As finance minister, Sunak implemented tax increases to pay for government support offered during the COVID-19 pandemic and to help Britons subsidize soaring energy bills. That has drawn criticism from many activists in the historically low-tax party.

Sunak has pledged to cut taxes over time to avoid stoking inflation, but Truss has said she would act immediately to lower the tax burden.

“Almost undoubtedly Mr Sunak’s problems are a combination of policy position and personality,” John Curtice, a professor of politics at the University of Strathclyde and one of Britain’s leading polling experts, told Times Radio.

“He tells us that he’s an instinctive tax cutter, but of course for good or ill as chancellor he has presided over a increase in taxation and spending, and that is something which causes angst within large sections of the Conservative Party.”

Britain’s PM hopefuls promise to get tough on illegal migration

‘I am the underdog,’ says British PM candidate Sunak