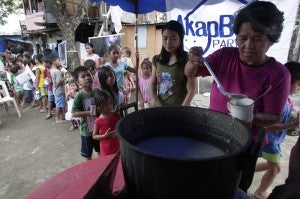 Filipino children wait in line to receive porridge during a free feeding program by a local NGO at a community of illegal settlers in suburban Quezon City on Sunday, March. 18, 2012. Poverty afflicts about a third of the Philippines' 94 million people. According to the World Bank, the Philippines has to have sustained economic growth of over 5 percent to reduce povery. AP PHOTO/AARON FAVILA

MANILA, Philippines — The World Bank says the Philippines needs to accelerate reforms to allow for sustained growth of above 5 percent a year to improve the lives of the poor.

The bank’s report released Monday says inflation is low and stable and government finances are manageable.

It also says the central bank is awash with dollars, and the popular government in place is committed to improving governance and reducing poverty.

It says strengthening public finances and competitiveness are needed for rapid growth of above 5 percent — the same level achieved by neighboring countries that led to greater poverty reduction.

Read Next
P100M properties lost so far in Gotesco mall fire in Caloocan City
EDITORS' PICK
Experience clearer calls nationwide with Smart VoLTE
Lorenzana orders review of protocol in handling slain rebels’ remains
PNP probing influx of marijuana in NCR, adjacent provinces
Duterte: May Bonifacio inspire all Filipinos amid COVID-19 pandemic
Arthaland’s property management arm utilizes Amazon Web Services to enhance delivery of service
Smart Prepaid encourages the youth to take their passions to the next level and ‘Live GIGA’
MOST READ
‘What is mine is hers,’ says Matteo on sharing finances with his Popstar Royalty wife
Lorenzana orders review of protocol in handling slain rebels’ remains
DOF to PITC: Return P1 billion in interest on ‘idle’ funds
Robredo to gov’t: Listen to ‘cautious’ Metro mayors on holiday season shift to MGCQ
Don't miss out on the latest news and information.