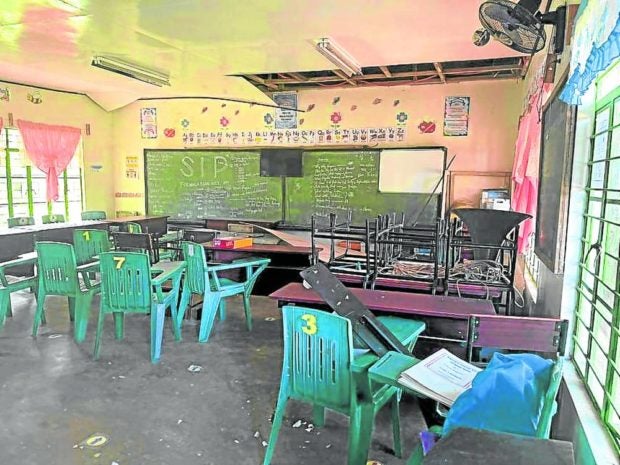 MANILA, Philippines — The Department of Education (DepEd) has asked for an additional fund of P16 billion to repair schools damaged by calamities, including those affected by the recent strong quake that shook Northern Luzon and Typhoons Odette and Agaton that struck last year.

DepEd spokesman Michael Poa lamented that the department’s quick response funds, which amounts to about P2 billion a year, are not enough to address all damage sustained from natural calamities, which in turn results in backlogs of repairs.

“We have funds for quick response pero hindi siya kasya because the quick response funds we’re only usually given to DepEd is mga P2 billion a year and this is definitely not enough,” he said in an interview over ABS-CBN News Channel on Wednesday.

“Although some repairs were done, hindi siya natatapos because talagang kulang sa funds and then nagpapatong patong siya,” Poa added.

(Although some repairs were done, it’s not usually finished due to lack of funds, then it overlaps with other repairs needed.)

He said the department has already asked for P16 billion in additional funding for repairs for this year.

“Right now, we have already asked the President through the DBM (Department of Budget and Management) for additional funding of P16 billion to augment the current funds for quick intervention for areas affected by Odette, Agaton and hopefully even the quake-affected areas,” the DepEd spokesman said.

Poa said that the P16-billion augmentation is targeted to be used only for this year.

The DepEd is planning to put up temporary learning spaces for schools damaged by the earthquake and even those that sustained damage from the two typhoons last year.

He, however, said that DepEd is still determining how many temporary learning spaces it would put up as the tally of damaged schools due to the earthquake “keep on going up.”

Poa said the number of damaged schools due to the earthquake has already reached 276, which is a far cry from the 35 initially recorded a day after the quake hit.

DepEd is also considering using tents for the temporary learning spaces, saying it can be reused if needed.

“Usually what we do is we use those light materials but the problem is once the schools are repaired, sometimes in certain localities, those temporary learning spaces are made permanent. They’re just there, it’s such an eyesore,” Poa said.

“So we are also considering [using tents], although we have to study this if tents are in fact viable for the students because with tents, after using them, you can actually store them and reuse them when needed,” he added.