US jet that flew Pelosi to Malaysia turns north to Philippines 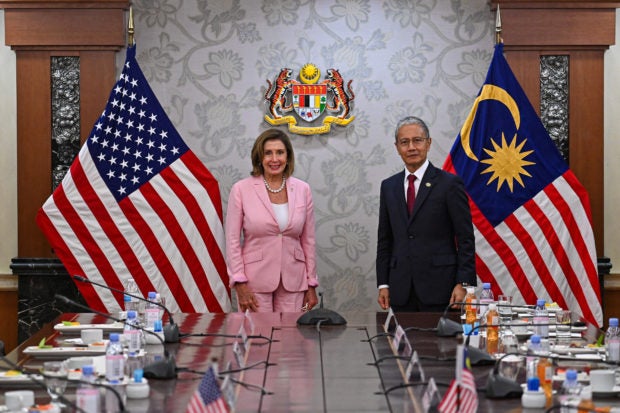 KUALA LUMPUR — A U.S. air force jet that flew U.S. House of Representatives Speaker Nancy Pelosi to Malaysia headed towards Borneo before turning north to the Philippines in the most tracked flight on tracking website Flightradar24 on Tuesday.

Reuters could not immediately establish if Pelosi or her delegation were on flight SPAR19. The plane left Kuala Lumpur at 3:42 p.m. (0742 GMT) and flew east towards Borneo on a route that skirted the South China Sea. Pelosi was expected to arrive in Taipei later on Tuesday, sources said earlier.

Like SPAR19, a second U.S. air force plane arrived in Kuala Lumpur on Tuesday morning. According to flight-tracking website Flightradar24, SPAR20 had not left the Malaysian capital.

READ: Pelosi lands in Malaysia as China rages over Taiwan

A visit to Taiwan by Pelosi, who is second in the line of succession to the U.S. presidency and a long-time critic of China, would come amid worsening ties between Washington and Beijing. She has not confirmed if she would visit the self-governed island which Beijing claims as its own.

As of 1130 GMT, SPAR19 was flying just south of the Philippines, according to Flightradar24, in a route tracked by as many as 300,000 people on its website.

A normal flight from Kualar Lumpur to Taiwan’s capital of Taipei would cross the South China Sea, with a typical flight time of under five hours.

Since last week, China’s People’s Liberation Army has conducted various exercises, including live fire drills, in the South China Sea, Yellow Sea, and Bohai Sea, in a show of Chinese military might.