China to see population shrink by 2025 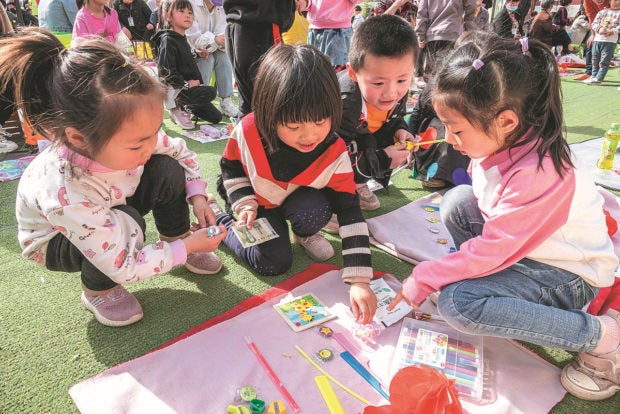 BEIJING — China’s population growth is set to turn negative by 2025, as low fertility rates and aging will bring long-term challenges, the National Health Commission, the country’s top health authority, said in an article published on Monday.

It is the commission’s first projection with a specific time frame on negative population growth in the country as years of falling birthrates have prompted heated discussions on when China would face a shrinking total population.

The growth rate of China’s population has been slowing down in recent years, and negative growth will occur during the 14th Five-Year Plan (2021-25) period, said the article published in Qiushi Journal, the flagship magazine of the Communist Party of China Central Committee.

“The fertility level has been falling continuously, with the overall fertility rate — the average number of children born to each woman of reproductive age — dropping to below 1.3 in recent years,” said the article. “A low fertility rate will become the primary risk to China’s balanced population development.”

Separately, the society has been aging rapidly and is expected to become deeply aged, that is, with the proportion of people age 60 and older exceeding 30 percent around 2035, it said.

China’s families have also gotten smaller. There were 2.62 members per family in 2021, down from 3.1 a decade ago.

“Negative growth, few children and aging will become the norm,” the commission said in the article, adding that improving fertility policies and achieving balanced demographic development would require “long and strenuous efforts”.

“The chapter of negative population growth is set to open and will last for a long time and intersect with the deep aging trend,” Yuan said.

However, a fundamental characteristic of China’s population — its giant size — will not disappear as the total is estimated to remain above 1.4 billion by 2035 and 1.3 billion by 2050, he said.

At present, the commission said in the article that it will focus on advancing supportive policies to encourage births.

“Heavy economic burden, lack of child care and females’ concerns over career development have become the major barriers to fertility,” the article said.

In a major push to address the issue, the central leadership announced on May 31 last year that all couples will be allowed to have up to three children. Several policies were rolled out to encourage births and create a fertility-friendly society.

In addition to a nationwide drive to boost the number of affordable nursery care slots, the commission said that supportive measures ranging from tax deductions for expenses on children under age 3 and fertility subsidies to extended maternity leave and favorable housing policies have been launched by many local governments.

In the future, more efforts will be dedicated to dispersing labor costs incurred from fertility-related leave among governments, employers and individuals and to accelerating development of affordable rental projects and targeted housing support, as well as building more family-friendly workplaces, the commission said.

US population grew at record low rate in 2021, in part due to COVID-19