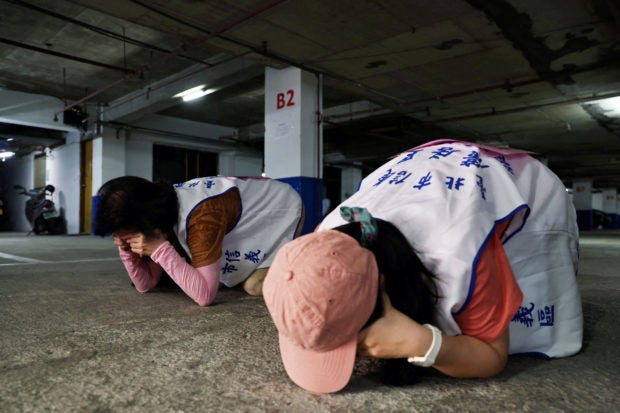 People demonstrate taking shelter with their hands covering their eyes and ears while keeping their mouth open, during a drill at a basement parking lot that will be used as an air-raid shelter in the event of an attack, in Taipei, Taiwan, July 22, 2022. REUTERS FILE PHOTO

TAIPEI — Taiwan is preparing its air-raid shelters as rising tension with China and Russia’s invasion of Ukraine raise new fears about the possibility of a Chinese attack on the democratic island.

China considers Taiwan its territory and has increased military activity in the air and seas around it. Taiwan vows to defend itself and has made strengthening its defenses a priority, with regular military and civil defense drills.

The preparations include designating shelters where people can take cover if Chinese missiles start flying in, not in purpose-built bunkers but in underground spaces like basement car parks, the subway system and subterranean shopping centers.

The capital of Taipei has more than 4,600 such shelters that can accommodate some 12 million people, more than four times its population.

Harmony Wu, 18, was surprised to learn that an underground shopping concourse where she and other youngsters were recently rehearsing some dance moves would be turned into an air-raid shelter in the event of war.

But she said she could understand why. 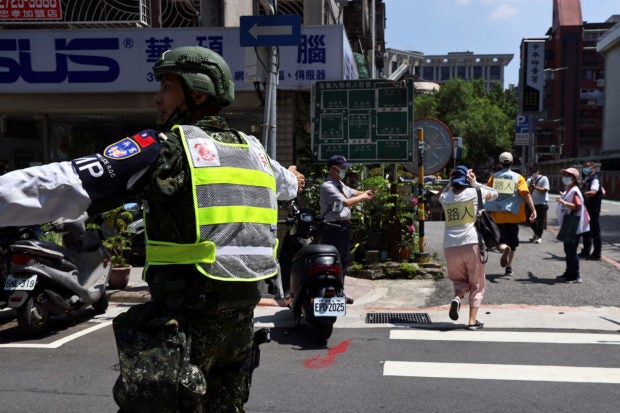 A military police officer guides people to evacuate to an underground space that will be used as an air-raid shelter in the event of an attack, during a drill in Taipei, Taiwan, July 22, 2022. REUTERS FILE PHOTO

“Having shelter is very necessary. We don’t know when a war might come and they are to keep us safe,” Wu said at the venue near a Taipei subway station.

“War is brutal. We’ve never experienced it so we aren’t prepared,” she said.

Taipei officials have been updating their database of designated shelters, putting their whereabouts on a smartphone app and launching a social media and poster campaign to make sure people know how to find their closest one.

Shelter entrances are marked with a yellow label, about the size of an A4 piece of paper, with the maximum number of people it can take.

A senior official in the city office in charge of the shelters said events in Europe had brought a renewed sense of urgency.

“Look at the war in Ukraine,” Abercrombie Yang, a director of the Building Administration Office, told Reuters.

“There’s no guarantee that the innocent public won’t get hit,” he said, adding that that was why the public had to be informed.

“All citizens should have crisis awareness … We need the shelters in the event of an attack by the Chinese communists.” 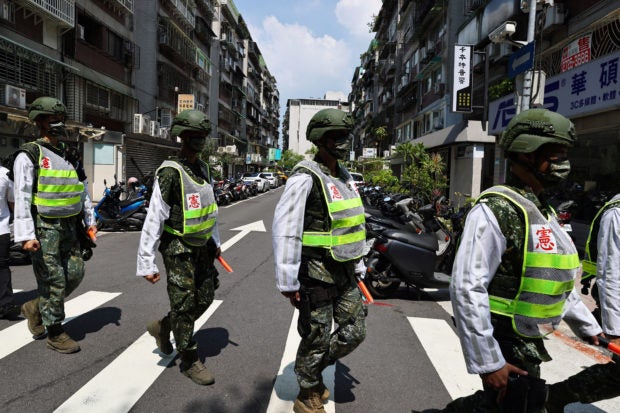 Military police officers get into position for a drill on how to guide citizens to safety in the event of an attack, in Taipei, Taiwan July 22, 2022. REUTERS FILE PHOTO

Last month, Taiwan held a comprehensive air-raid exercise across the island for the first time since the coronavirus pandemic disrupted regular drills.

Among the instructions citizens got in case of incoming missiles was to get down in their basement parking lots with their hands covering their eyes and ears while keeping their mouths open – to minimize the impact of blast waves.

Some civil defense advocates say more needs to be done.

Authorities are required by law to keep the shelters clean and open but they don’t have to be stocked with supplies like food and water. 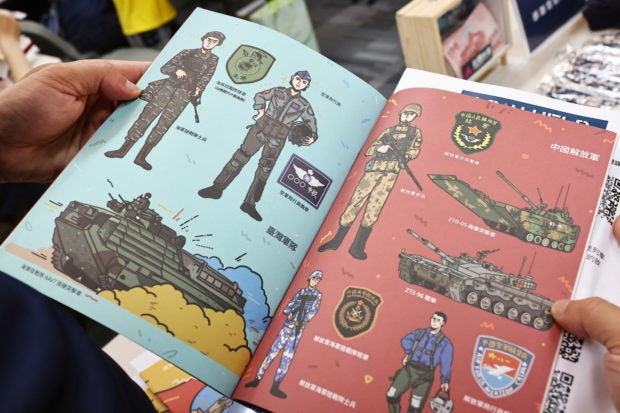 Researchers in parliament called in June for shelters to be provided with emergency supplies.

Wu Enoch of the ruling Democratic Progressive Party says the public must prepare survival kits to take with them when they seek shelter.

“What’s important is what you bring with you, for people to stay there for a long period of time,” Wu said, citing medical supplies and even tools to build a makeshift toilet.

After decade of saber-rattling across the Taiwan Strait separating the democratic island from China, many Taiwan people appear resigned to living with the threat of a Chinese invasion.

“I’m not stressed. I carry on with my life as usual. When it happens, it happens,” said Teresa Chang, 17, who was also going through her paces at the underground dance practice.