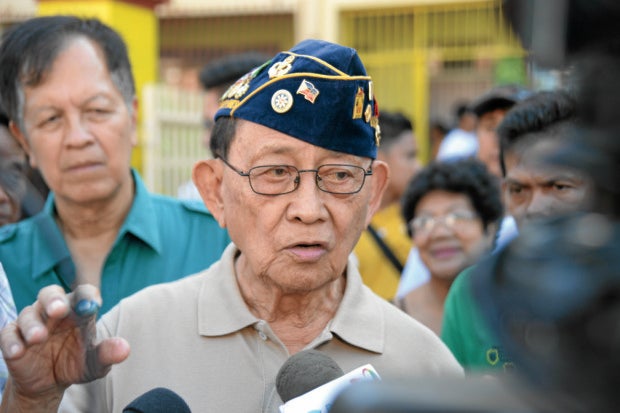 MANILA, Philippines — Former President Fidel Valdez Ramos passed away at the age of 94 on Sunday.

The Ramos family confirmed the passing of the former president on Sunday night but gave no further details.

“The Ramos family is profoundly saddened to announce the passing of former President Fidel Valdez Ramos,” the family said in an official statement.

“We thank you all for respecting our privacy, as the family takes some time to grieve together,” the family added.

According to the Ramos family, wake and funeral arrangements for the former president will later be announced.

Meanwhile, Senator Bong Revilla also issued a statement confirming the death of Ramos, whom he said was the one who convinced him to get involved in public service through the Lakas–Christian Muslim Democrats, or Lakas–CMD, which he now serves as a co-chairperson.

Lakas–CMD is the political party founded by Ramos, together with Raul Manglapus.

(FVR’s legacy to the country cannot be underestimated. Through his leadership, the Philippines emerged from the crises that enveloped every Filipino at that time)

According to Revilla, Ramos’ legacy is the “foundation upon which later administrations have built upon,”transforming the country from being “the sick man of Asia to the Tiger of the Region.”

“While the passing of our Chairman Emeritus is a great loss to our Party, it does not compare to the loss of our country. He was one of the best!” he added.

Writing the foreword for the book “Behind the Red Pen” penned by his close aide, Jojo Terencio that was published in 2021, Ramos said he considered the presidency as both an honor and a privilege that served as a feather to his cap, which started with a career in the military.

Ramos, in the book’s foreword, added that the presidency is a “matter of destiny.”

“I totally agree. A person can plan or aspire to become one all his or her life, but ultimately, the confluence of many things — people, the current political milieu, events, chance, and the candidates personality — will bring the presidency to the Anointed One. Destiny,” Ramos wrote in the foreword.

Ramos, in the foreword, also recalled that when he joined the 1992 presidential race, he was fully aware of his duty to give the people a “better quality of life by building on the grains of democracy.”

“So many things have happened since then but I have strong faith in the Filipino people, our leaders and the country’s future. We continue to aspire for a better life for all, and we will continue to work together to make it happen,” he said.

Ramos ended the foreword with his famous inspirational quip: “Kaya ba natin ito? Kayang-kaya basta tayo ay sama-sama!”  (Can we do this? We can! If we just work together!)

Read Next
‘Warn everyone’: Spain’s gay community acts as monkeypox spreads
EDITORS' PICK
‘Revolting’: 29,000 teachers left out after PS-DBM bought pricey, outdated laptops
House energy committee chair Arroyo bats for cheap electricity
Dengue cases in PH continue to swell: 92,343 as of July 23
TNT brings Sarah G and Mimiyuuuh together for epic collab
SMDC all set for growth, prepared to face market resurgence
Imee Marcos tests positive for COVID-19
MOST READ
Raffy Tulfo blasts ‘killjoy’ critics of Angara’s birthday party: It’s for charity
Homeowners of BF Homes in Parañaque protest opening of 5 gates to public
Jaya, family safe after house burned down in US
Bongbong Marcos to PNP: Use of force must be reasonable, justifiable and only when necessary
Don't miss out on the latest news and information.