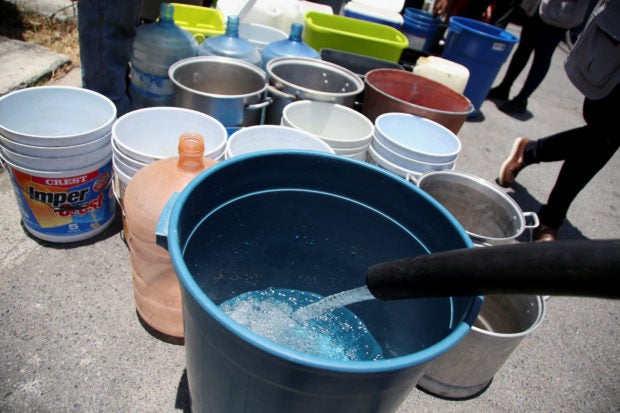 FILE PHOTO: Buckets are refilled with water by residents as a water truck distributes it outside houses at La Hacienda neighborhood in Guadalupe, in Nuevo Leon state, Mexico June 11, 2022. REUTERS/Jorge Mendoza

MONTERREY, Mexico — Mexico declared the water shortage in the northern state of Nuevo Leon a matter of “national security” on Friday as the region, home to Mexico’s industrial capital, has been crippled by a worsening drought in recent months.

In a declaration issued Friday afternoon, the federal government said available water should be prioritized for public use, and said existing federal water concessions to private companies could be modified or reduced.

“We’re going to be able to guarantee water (in the state of Nuevo Leon) eight to 10 more years,” President Andres Manuel Lopez Obrador said earlier on Friday during his regular news conference.

Outrage has grown in recent months across the metropolitan area of Monterrey, home to some 5.3 million people, as authorities sharply limited water access to residents, even as commercial bottlers and beer companies continued to extract what amounts to billions of gallons of water annually under federal concessions.

Heineken, which according to Mexico’s national water authority CONAGUA holds permits in the area for 3.6 million cubic meters of water, said earlier this month it would hand over the equivalent of 20% of the potable water used in its processes to residents.

Photos of canned water donated by Heineken went viral on social media in recent days, sparking criticisms from those who continue to lack water at home.

In June, authorities began curtailing access to running water across the metropolitan area to only a few hours each morning.

The water rationing has sparked sporadic demonstrations, with some residents protesting that they have gone stretches of days, and sometimes even weeks, without receiving running water at all.

Bottler Arca Continental, one of the largest Coca-Cola bottlers in Latin America and which also operates in Nuevo Leon, referred a request for questions to the local business chamber Caintra, which declined to comment.