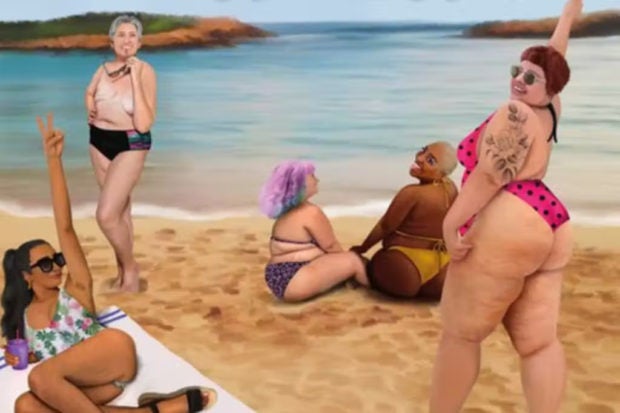 MADRID — Spain’s government is seeking to dump the “summer body” myth by welcoming all those who are overweight, have had breast surgery, or simply don’t feel they have the perfect bikini body, to flock to the beaches.

A new campaign entitled “Summer is Ours, too” was launched on social networks this week, aiming to challenge perceived beauty standards and, in particular, to free women from the social pressure, boosted by magazines and ad campaigns, to be slim.

The campaign poster shows a diverse group of women, some overweight, one with large tattoos, another with pink hair.

One of the women in the beach scene has had a mastectomy and is topless. Another is proudly displaying a hairy armpit.

The Women’s Institute, an organization directly dependent on the Ministry of Equality, is behind the campaign and tweeted that “bodies are diverse, free of gender stereotypes, and occupy all spaces. Summer belongs to us, too. Free, equal and diverse.”

The “Summer is Ours, too” hashtag has been circulating in recent days, at a time when websites, magazines and advertisements are, like every year, championing “operation bikini” or the “summer body.”

Cayo Lara, former head of United Left coalition, is among those who have expressed disagreement with the campaign

Responding to Equality Minister Irene Montero, who had just tweeted about the campaign, Lara said that “a problem has been created where there was none.”

The far-left Podemos party, junior partner in Socialist Prime Minister Pedro Sanchez’s minority coalition government, stated on its official site: “If bodies bother you, you can always stay at home and tweet, no problem.”