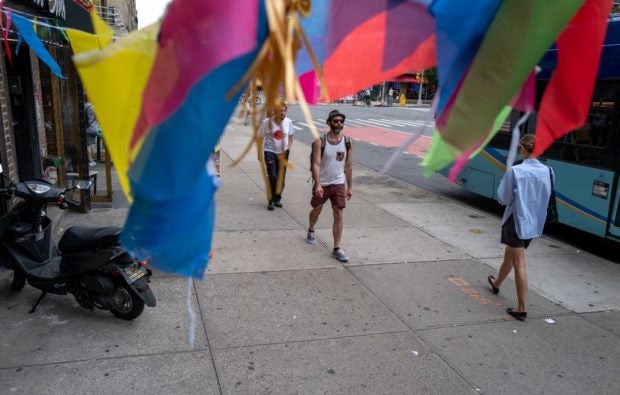 People walk through the Chelsea neighborhood in Manhattan, the heart of New York’s LGBQ+ community on July 29, 2022 in New York City. Chelsea is also where New York City has set up one of the few monkeypox vaccine clinics. (Photo by SPENCER PLATT / GETTY IMAGES NORTH AMERICA / Getty Images via AFP)

LOS ANGELES, California — The spread of the monkeypox virus and its prevalence among gay men has raised widespread fear, growing anger and a number of uncomfortable questions for a community still scarred by the early years of the HIV/AIDS epidemic.

While there is still widespread public confusion about the precise nature and spread of the disease, it is a fact that the overwhelming majority of monkeypox patients in the United States identify as LGBTQ and are male.

For some, the situation evokes dark parallels with the 1980s, when HIV/AIDS was stigmatized as a “gay plague,” hospitals and funeral homes turned away patients and victims, and White House officials either cracked homophobic jokes or simply ignored the new virus.

At a meeting this week in West Hollywood, a hub for Los Angeles’ LGBTQ community, actor Matt Ford received a standing ovation as he spoke openly about the “excruciating” symptoms he had endured when he contracted the disease — an experience he has also shared online.

Afterward, he told AFP that he “definitely had doubts before coming out publicly about my experience.”

“I was pretty on the fence prior to tweeting due to the potential for social stigma and people being cruel — especially on the internet — but thankfully the response was mostly positive,” he said.

What pushed Ford to speak out was the urgent need to warn others about the disease in the days leading up to West Hollywood’s major LGBTQ Pride celebrations.

While monkeypox has not so far been labeled a sexually transmitted infection (STI) and can infect anyone, the group currently most affected is men who have sex with men.

Spreading through skin-to-skin contact, the disease is most often transmitted through sexual activity, and the World Health Organization this week urged gay and bisexual men to limit their sexual partners.

“At the end of the day, it’s not homophobic to say that certain groups are disproportionately impacted by the monkeypox outbreak,” said Grant Roth, who is part of a network that collects information about the disease in New York.

“And right now it’s about the queer community.”

While the notion of monkeypox affecting mainly the LGBTQ community raises fear of homophobia and stigmatization, it has also prompted anger that the US government is not taking the disease seriously enough.

A lack of available vaccines to meet demand has caused outrage across a country where some 4,900 cases have been detected — more than any other nation.

On Thursday, San Francisco and New York state declared public health emergencies in order to bolster efforts to control the spread of monkeypox.

The US health department announced plans to allocate an additional 786,000 vaccine doses, which will take supply above one million — but for many, the response has come too late.

“Why is the government not acting as fast as it should?” asked Jorge Reyes Salinas of Equality California, a coalition of LGTBQ activists and organizations.

“We need more resources, and we need more attention to this issue. It’s not just an LGBTQ concern. It should not be painted that way.”

The way the health emergency is being handled revives painful memories, he said.

“I think that’s always gonna be a risk in the back of our minds because, again, of the HIV and AIDS pandemic.”

Roth said a lot of “blame” has been placed on men who have sex with men, when in reality the government should have “secured the vaccines sooner, and made testing more widely available.”

Other speakers outlined measures that the community can take to protect itself until then.

Dan Wohlfeiler, who has worked with HIV and STI prevention for more than three decades, urged people to use the “lessons of COVID” to address the spread by temporarily narrowing social circles and creating bubbles, including for sexual activity.

“This event is yet another traumatic time for a lot of us. Hopefully vaccine access will significantly increase in the next six to eight weeks,” he said.

“The more steps that we take as individuals starting now to protect ourselves and our partners, the sooner we can end this outbreak.”

“I’m proud to belong to this city and to have this opportunity” to learn more about the disease, said a Latina trans woman after the meeting, who asked not to be identified.

“But how can we not be afraid, if historically we have been discriminated against?” she said.

“I hope this time it will be different.”