Monkeypox reaches PH; DOH turning to US for jabs 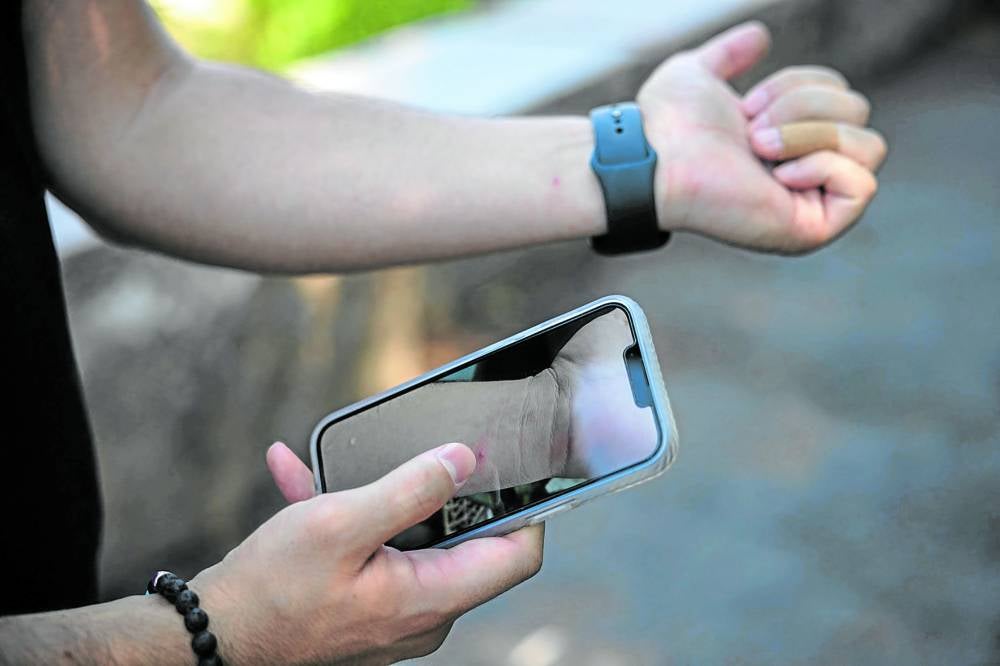 GLOBAL EMERGENCY A man in New York who has recovered from monkeypox shows scars from rashes on his skin in a photo taken July 19. —AFP

The Department of Health (DOH) reported the first monkeypox case in the Philippines on Friday and officials said they were trying to obtain vaccines and medicines against the viral disease from the United States Agency for International Development (USAID).

The 31-year-old Filipino who returned from abroad early on July 19 had already recovered but was still isolating at home, according to Health Undersecretary Beverly Ho. She said 10 people identified as close contacts, including three from the patient’s household, had been ordered to quarantine.

The person had previously traveled to countries with documented monkeypox cases, she added without elaborating.

Around 70 countries where monkeypox is not endemic have reported outbreaks and confirmed cases topped 20,300, prompting the World Health Organization (WHO) on July 23 to declare a global health emergency. WHO reported five deaths from Jan. 1 to July 22.

The Philippine case was confirmed positive on Thursday and the close contacts had not shown any symptoms, Ho said.

An infected person would have a chickenpox-like rash or sores on his skin and also experience flu-like symptoms.

Ho said the DOH was planning to get a compassionate special permit (CSP) for monkeypox vaccines and medicines.

She told reporters on Thursday that the DOH was in “constant communication” with its counterparts and USAID to secure jabs and medicines for monkeypox.

These vaccines would only be for a “select population group” that is most at risk in contracting the disease.

“It’s not like COVID that all of us need to be vaccinated,” Ho said.

The main mode of treatment, she said, was still “supportive therapy.” This involves relieving symptoms to prevent the patient’s condition from worsening.“The medicines will come in handy just in case the case is not a simple one,” Ho said.

During a briefing at Malacanang on Friday, the health official said current regulations for emergency use of vaccines and medicines covered only COVID-19. Vaccines for monkeypox would have to get a CSP from the Food and Drug Administration so these could be used “as soon as possible,” she said.

After disease was detected in countries where it was not endemic in early May, the DOH issued interim technical guidelines for monkeypox surveillance, screening, management and infection control.

This was followed by the creation of the Philippine Inter-agency on Committee on Zoonosis (PhilCZ) chaired by the DOH with the departments of environment and agriculture as members.

By June, the Research Institute for Tropical Medicine (RITM), which had been designated as the main isolation facility, was able to “optimize” its testing device to detect monkeypox virus.

But the RITM said that it would process only those that “satisfy the definition of a suspect monkeypox case” – one who has skin rashes accompanied by fever, intense headache, lymphadenopathy (swollen lymph nodes), back pain, myalgia (muscle aches) and intense asthenia (lack of energy).

The DOH guidelines on the management of monkeypox, which it urged health-care providers and local governments to follow, instruct those responsible to: Isolate, advise and report suspected cases of monkeypox; rule out other disease and test for the virus; treat symptoms and isolate for 21 days; advise households and establishments on minimum public health standards; and increase monkeypox awareness with verified information.

Health authorities say that disease transmission can occur through contact with skin lesions caused by the virus, as well as body fluids, large respiratory droplets and contaminated bedding.

“Our (public health surveillance) systems are in place. But we all need to work together. We need also the public to be vigilant,” Ho said.

“Based on what we know about monkeypox … there is a very clear need to be more careful about who we interact with, particularly sexual, intimate contact,” she said.

Press Secretary Tixie Cruz Angeles said the “primary concern” of President Marcos was getting information out so that people would be aware.

Countries where monkeypox is not endemic but with confirmed cases include nine in Asia, 35 in Europe, seven in the Middle East and Africa, and 18 in the Americas.

Monkeypox is a disease that is zoonotic, or one that can be transmitted from animals. Animals associated with it are squirrels, African dormouse, Gambian pouched rat and sooty mangabey.

It is endemic in the African nations of Cameroon, Central African Republic, Democratic Republic of the Congo, Gabon, Ghana, Ivory Coast, Liberia, Nigeria, and Sierra Leone.

Not hard to handle

Dr. Rontgene Solante, head of San Lazaro Hospital’s adult infectious diseases unit, told the Inquirer that the disease was “not too difficult to handle” because it was “not as complicated as COVID-19.”

“Our experience with COVID will help us in terms of room allocations for isolation and clinical management diagnosis. But there are important points that we need to know about this monkeypox and why it is not difficult to handle,” Solante said.

“Most patients will only have mild to moderate symptoms, mostly skin lesions,” he said.

Caring for patients entailed lesser use of equipment to manage COVID-19, like mechanical ventilators. Monkeypox patients may just isolate themselves at home and may not need hospital treatment, he added.

But Solante said more effort should be given to building health-care capacity for detection and treatment such as expanding testing capacity and including specialty centers, like clinics for sexually-transmitted diseases (STD), human immunodeficiency virus (HIV) and dermatology, to administer patient care and treatment.

“[In the] current outbreak, 95 percent are men who have sex with men, and the most common transmission is an STD-like skin lesions,” Solante said.

He also emphasized the need to raise awareness to prevent stigma and discrimination among gay men, who are the segment of population most affected in the ongoing global outbreak.

In a statement on Friday, the DOH said an investigation of recent cases indicated “potential transmission through sexual contact.”

“Minimize close sexual contact with suspected cases, especially those with rashes or open wounds. Keep hands clean. Wear a face mask, cover coughs using the elbow, and choose areas with good airflow,” it said. WITH A REPORT FROM REUTERS