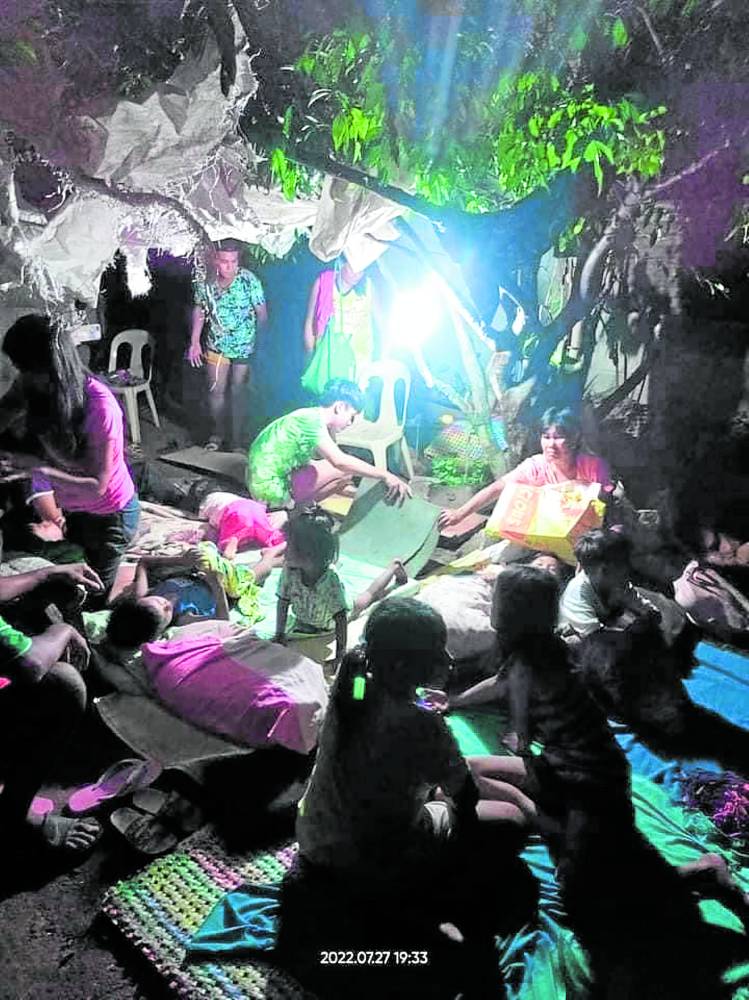 SAFETY FIRST Some residents of Barangay Namarabar in Peñarrubia town, Abra province, prepare to sleep at a makeshift outdoor shelter to be safe from the aftershocks from Wednesday’s powerful earthquake. The government’s earthquake monitor recorded more than 800 aftershocks as of Thursday afternoon, including some as strong as magnitude 5.0. —Luis Agad Jr./contributor

BAGUIO CITY—Fearing the worst, many families in the quake-hit areas in Abra province are spending the night outdoors or huddling on the floor of their homes near the doorways for a quick dash to safety in case of aftershocks from the powerful earthquake that shook Luzon this week.

The constant jolts, which included one that was recorded at magnitude 4.8 at 2:43 a.m. on Thursday and a stronger magnitude 5 more than an hour later kept families awake overnight also in the Cordillera provinces of Kalinga, Mountain Province and Ifugao, and in the rest of the Ilocos region.

“We hardly slept last night because the aftershocks were giving us the jitters. We’re also scared that a landslide will hit our house,” 80-year-old Aregentina Serbania told the Inquirer by phone on Thursday from Barangay Pamutic in Abra’s Pidigan town.

She said her family made a temporary shelter out of a worn-out tarpaulin and a few pieces of wood from a fallen tree beside her house.

Serbania said at least 10 other families in her neighborhood opted to stay in makeshift tents for fear that another strong tremor would destroy their houses, which are situated in landslide-prone areas.

Laarni Sibayan Ilagan, a Baguio-based employee of Benguet Electric Cooperative, said her 6-year-old nephew in Abra’s Peñarrubia town would only sleep when his parents allowed him to embrace a flashlight.

“This is how traumatized they are in Abra,” Ilagan told the Inquirer.

Many Abra residents have been sleeping outside their homes, many cracked and damaged by tremor felt as far as Metro Manila and Cavite province.

“When strong rains fell (on Wednesday), they had to return inside their homes and stay near the doors so they could be ready to run out if danger struck,” Ilagan said.

Some families quickly moved out of their houses when the rain stopped and slept in tents. Others made do with just blankets, she said.

According to Abra emergency responder Joel de Leon, other residents were appealing for tents and materials for temporary shelters as most of them were too scared to stay inside their houses.

A resident of Candon town in Ilocos Sur said the constant shaking kept everyone alert through dawn.

As of 4 p.m. on Thursday, the Philippine Institute of Volcanology and Seismology (Phivolcs) recorded 887 aftershocks with a magnitude ranging from 1.5 to 5.0 since the earthquake centered just 11 kilometers from the Abra capital of Bangued shook Luzon on Wednesday morning.

The National Disaster Risk Reduction and Management Council said four people had been killed during the earthquake.

But local disaster officials recorded at least six—two in Benguet province, one in Abra, one in Ilocos Sur, one in Kalinga and one in Mountain Province. The fatality in Ilocos Sur was an 80-year-old woman who was buried in a landslide.

Assistant Secretary Bernardo Rafaelito Alejandro, deputy administrator for operations of the Office of Civil Defense, reported that the quake injured more than 130 people and damaged at least 349 houses in the Cordillera and Ilocos regions. He said the quake affected over 4,969 families, or 20,000 individuals.

Property damage was reported in almost every town in Abra. The province declared a state of calamity which would allow the provincial government to draw emergency funds and impose price control on basic commodities.

De Leon told the Inquirer in a phone interview that there was an urgent need for medicine and clean water after some pipelines were damaged.

“The water from the lines has been murky,” he said.

Among those appealing for water are residents of Monggoc and Pamutic villages in Pidigan.

“There have been water refilling stations offering free drinking water, but we don’t have water for other needs,” said Alex Pacis, who is from Monggoc.

He said they were also in dire need of food because all the stores in their community were closed.

Food stocks in Abra are enough for two weeks, according to Juliet Lucas, Cordillera director of the Department of Trade and Industry.

President Marcos, who visited Abra on Thursday and inspected the damaged areas, ordered officials to prioritize the restoration of electricity and communication lines in areas affected by the earthquake.

At a situation briefing in Bangued, Mr. Marcos said water supply must also be restored immediately. (See related story on Page A7.)

His sister, Sen. Imee Marcos, said solar water purifying units were already deployed in the Ilocos region, prompting the President to order the procurement of more of these for Abra and other quake-affected areas.

The Armed Forces of the Philippines on Thursday said it had deployed 14 search, rescue and retrieval teams to the quake-hit areas.

The Department of Public Works and Highways reported that four of the 21 national roads affected by landslide, rockslide and soil collapse remained impassable on Thursday.

The four are the Lubuagan-Batong Buhay Road in Kalinga; the Baguio-Bontoc Road in Mountain Province; the Tagudin-Cervantes Road in Ilocos Sur; and the Jct. Santiago-Banayoyo-Lidlidda-San Emilio-Quirino Road in Quirino and Ilocos Sur provinces.

Alternate roads and unimpeded sections of Halsema Highway, which runs through the farming towns of Buguias and Atok in Benguet, are allowing the transportation of vegetables from the province, said Cameron Odsey, Cordillera director of the Department of Agriculture.

Damage assessments of farms in the Cordillera, particularly in Abra, were still underway, Odsey said.

In Ilocos Norte, officials declared the Paoay Ruins “unsafe.” It is one of the major tourist destinations in the province.