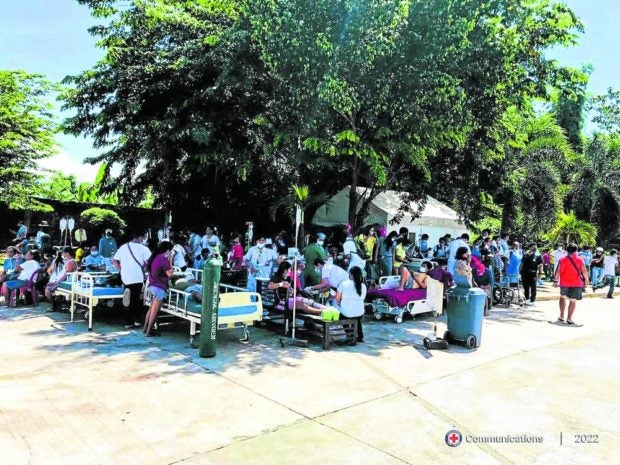 VIGAN CITY, Ilocos Sur, Philippines — Norman Aba, his two cousins and a 10-year-old niece were at the topmost floor of the Bantay Watchtower built from stone outside of this city when the 431-year-old structure swayed slowly and then wobbled violently on Wednesday morning.

The severe shaking, caused by a 7-magnitude earthquake, gave Aba, 41, his “first brush with death.”

Aba, his companions, and their tour guide were the only people inside the watchtower just minutes before portions of it collapsed.

They were lucky to escape with their lives.

The Philippine Institute of Volcanology and Seismology (Phivolcs) said the epicenter was centered 17 kilometers underground, about 3 km west of Abra province’s Tayum town.

Phivolcs recorded 280 aftershocks as of 4 p.m. on Wednesday, with magnitudes ranging from 1.5 to 5.4.

“We were checking the sights from atop the tower. Then the ground shook. It did not sink in to me immediately. But when the old stones started falling on us, that was when I realized that an earthquake was happening,” Aba told the Inquirer.

“We used our hands to cover our heads. When the shaking was getting stronger and more stones were falling, I asked everyone to duck under the bell. That was how we survived this incident,” he said.

“The stairs were steep and narrow. There was no way we could go down immediately,” Aba said.

Their tour guide, a man in his 60s who was bleeding in the head, shielded his crying niece from the falling debris. Aba and his two cousins got bruises on their arms.

After reaching the bottom of the five-story watchtower, Aba said they rushed to the parking lot and returned to their hotel, praying in gratitude for escaping death.

A 23-year-old woman, Jonaly Siganay, at Barangay Zone 5 in Abra’s capital town of Bangued, was among the four that were initially reported to have died in the quake.

The strong tremor toppled the wall of a dormitory on her, authorities said.

Aron Cul-iteng, 25, a construction worker in La Trinidad, capital of Benguet province,was struck and killed by debris that fell from a building under construction.

A landslide near a mountain village in Tuba, also in Benguet, buried 32-year-old Resty Emperador Tavas. He died on the way to the hospital.

In Kalinga province, construction worker Jefferson Basar, 24, was killed while he was placing wire mesh over a roadside hill in Balbalan town.

A report from the provincial disaster risk reduction and management council in Abra said a 86 people were injured as of 4:26 p.m. from the municipalities of Bangued, Boliney, Bucay, Lagangilang, Luba, Peñarrubia, Pidigan, Pilar, Sallapadan, San Juan, San Quintin and Tubo.

Some of the injured were patients at Abra Provincial Hospital, which was damaged by the quake.

At least 16 patients undergoing dialysis at the Shepherd’s Pillar Kidney Care and Dialysis Unit in Bangued, the only dialysis center in Abra, had to be taken to an open area during the temblor.

“People were running outside as it was shaking. After we unhooked the patients, some of the ambulatory patients and their companions quickly exited the building while the nurses had to roll out the patients who couldn’t walk,” a dialysis nurse there told the Inquirer in a phone interview.

Daisy dela Pena, a resident of Barangay Zone 7 in Bangued, said the tremor woke her up. She joined other villagers who gathered in open areas near their homes. She said the multiple aftershocks unnerved her.

In Abra’s San Isidro town, the Rural Health Unit was preparing to vaccinate kids in the area when the quake struck.

“The children started crying, and their parents started panicking. Some stumbled while running away from where debris may fall,” said Princess Dumaslan, an rural health unit nurse who was treating patients.

In Baguio City, a 19-year-old female student trying to escape from the fourth floor of A’s Dormitory accidentally fell off the fire exit, hitting a taxi.

According to the taxi driver, the victim landed head first on the windshield. The woman was taken to the Saint Louis University Hospital of the Sacred Heart.

In Ilocos Sur, the provincial government ordered the evacuation of all residents living in the coastal barangays following the quake for fear of a tsunami.

Kennon Road in Baguio was closed to traffic due to multiple landslides, according to the Department of Public Works and Highways.

Only one lane of the Marcos Highway, a major road to the summer capital, remained open to traffic.

The Bokod section of the Baguio-Nueva Vizcaya road and portions of Itogon town on the Baguio-Bua-Itogon road, both in Benguet province, have also been closed due to rockslides.

A section of the Halsema Highway, the main vegetable road of the Cordillera, was also closed following a landslide in Bauko, Mountain Province, said Cameron Odsey, Cordillera director of the Department of Agriculture.

The Department of the Interior and Local Government (DILG) reported 12 roads and four bridges (three in Bangued and one in Lagangilang in Abra) were damaged.

The DILG said the quake damaged 51 government buildings, 1,214 residential homes, and seven commercial buildings, but it did not specify the locations.

Ensuring that food lanes are open has become the priority for agencies in the Cordillera region because of multiple landslides that blocked major arteries, said Juliet Lucas, regional director of the Department of Trade and Industry.

Baguio and the provinces of Kalinga and Ifugao have suspended work and classes due to the quake.

Power interruptions were reported in Laoag City and several areas in Pangasinan.

There were 7,532 isolated families and some 1,729 families evacuated to safer ground, the DILG said.

DILG Secretary Benjamin Abalos Jr. said that in all, 218 towns in 15 provinces in Regions 1, 2 and the Cordillera Administrative Region were affected by the quake.

President Marcos said in a press briefing that he would not be visiting the quake-hit areas any time soon so as not to interrupt local rescue and relief efforts.

Press Secretary Trixie Cruz Angeles said the President, however, got in touch with local officials in Abra to get information.

The quake hit the so-called Solid North comprised of northern Philippine provinces on which Mr. Marcos and his allies banked for support in the recent elections.

Around three hours after the quake struck, the President issued a brief statement on his social media accounts expressing sadness about the tremor and assuring those affected that the government would attend to their needs.

“To my fellow countrymen, especially in Abra, let’s be careful and do approach representatives of the government if you need help. We will rise as one from this challenge,” he said in Ilocano.

Mr. Marcos said it was not necessary to declare a national calamity at this time.

“However, depending on the information that comes back, I am sure we will hear a lot more, a lot more information hasn’t reached us yet, so that might happen,” he said.

Angeles said Mr. Marcos ordered the immediate dispatch of rescue and relief teams to Abra and directed telecommunication companies to ensure free communication to areas where telco towers may have been damaged.

In his briefing, the President also called on local officials to inspect houses and buildings once the aftershocks subside to determine whether they are still safe to live and work in. He also called on local authorities to be wary and prepared for possible landslides should rains pour in the disaster-stricken areas.

The President said the DSWD’s Assistance to Individuals/Families in Crisis Situation (AICS) program would be activated to provide necessary aid to the affected residents.

The President said he was in his office when the earthquake struck and heard a chandelier “clinking.”

“That’s our guide here in the Palace. When you hear the chandelier clinking, that means there’s an earthquake,” he said, adding that the quake was “stronger than the usual.”

Phivolcs Director Renato Solidum Jr. said the quake was “most likely” caused by the movement of the Abra River Fault.

The last “historical earthquake” to take place along the Abra River Fault was in 1868 and it was a magnitude of around 4.0 to 5.0.

He noted that Wednesday’s tremor was the strongest “in-land” earthquake since the 6.6 magnitude that struck Masbate and the Bicol region on Aug. 18, 2020.

The Abra quake was felt at various intensities across Luzon, with the strongest at intensity 7 in Bucloc and Manabo in the province.

It was felt at intensity 2 as far away from the epicenter as in General Trias City in Cavite and Sta. Rosa, Laguna.

The Philippines sits in the Pacific Ring of Fire, a region where frequent earthquakes and volcanic activities occur.

In July 1990, a 7.8-magnitude earthquake centered in Nueva Ecija created a ground rupture stretching over a hundred kilometers.

Fatalities were estimated to reach over 1,200 and caused major damage to buildings in Baguio, Pangasinan and Manila.