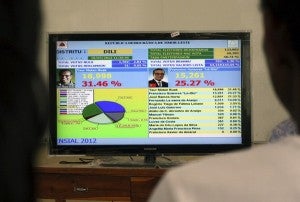 East Timorese watch presidential election results being broadcast on a television at an election center in Dili, East Timor, on Sunday, March 18, 2012. East Timor voted for a new president Saturday in an election that tested the young nation's political stability ahead of the planned departure of UN troops later this year. AP PHOTO/FIRDIA LISNAWATI

A tally broadcast live by the country’s electoral commission on state-owned radio and television station RTTL, put Guterres ahead with 28 percent of the 411,353 votes counted so far – around 65 percent of the total votes cast.

Former guerrilla leader Taur Matan Ruak was in second place with 25 percent of the vote, while Nobel Prize-winning incumbent Ramos-Horta, who is seeking another five-year term, was in third place with 18 percent.

In the 2007 presidential elections Ramos-Horta had turned his fortunes around after lagging behind Guterres in the first round but winning through in a run-off with 69 percent of the vote.

Votes were being counted by hand, some in remote areas with poor communications, and results were not due until later in the week, according to election officials.

Ermenegildo Lopes, head of the Bloku Ploklamador whose pro-reform alliance has five places in the 65-seat parliament, said he doubted any candidate would land the knock-out blow needed to avoid a second round of voting.

“Our representatives in the districts indicate that the vote is split. With 12 candidates running it is hard for any one of them to get the more than 50 percent majority constitutionally required for an outright win,” he told AFP.

A second round of voting would be held in two weeks’ time if no clear winner emerges from Saturday’s vote.

Around the country, Timorese people had their eyes glued to their television sets, watching the changing figures.

Whether they were shopkeepers selling traditional handicrafts at Tias market, candidates’ spokesmen mingling with journalists, or people sitting at the lobby coffee shop of Hotel Timor, the talk was about who would emerge top.

The vote is the first in a series of key events in the poor and chronically unstable country still traumatized by Indonesia’s brutal 24-year occupation, which ended with a vote for independence in 1999.

In May, East Timor will celebrate 10 years of independence, which came after three years of UN administration. Then, in June, voters will choose a new government in a general election.

At the end of the year the nation of 1.1 million people bids goodbye to UN forces stationed in the country since 1999.

Saturday’s voting was remarkably organized for the poor and chronically unstable country, and the peaceful polling stood in stark contrast to the deadly 2006 pre-election violence, taking East Timor to the brink of civil war.

Read Next
American shot dead in Yemen – security official
EDITORS' PICK
UK’s Boris Johnson will resign, BBC reports
Unemployment rate up to 6% in May
Geek out at TOYCON 2022 powered by Smart Signature
High inflation: Your P1 is now worth only 87 centavos
High-risk pregnancy: Reducing your risk is in your hands
House energy committee chair Arroyo bats for cheap electricity
MOST READ
Suspect in grisly killing of missing woman in Bulacan arrested
Kim Atienza’s daughter flaunts bikini body in response to critics of her ‘revealing photos’
Japanese artist who created ‘Yu-Gi-Oh!’ found dead in the sea
FDA probes popular Filipino noodle brand for ‘high level of ethylene oxide’
Don't miss out on the latest news and information.